In March 2019 a letter was received from Aanischaaukamikw, the Cree Cultural Institute (ACCI) in what is now known as Quebec, officially requesting the transfer of this coat to their guardianship. In January 2020 Bristol City Council took the decision to return the coat to the Institute as the cultural custodians for the Cree Nation of Eeyou Istchee. It is planned to return it to its territory of origin by April 2020.

This request followed several years of discussions and negotiations between ACCI and staff at Bristol Museum & Art Gallery. As such it forms part of the continuing history of our engagement with originating communities and their requests for repatriation of objects and human remains from our collections.

Following approaches from the governments of Australia and New Zealand, in 2006 and 2007 respectively, Bristol repatriated the human remains of ancestors back to Aboriginal Australian and Maori institutions. In 2019 we also returned human remains and associated stone and shell grave goods to representatives from the native North American Ti’at Society from California.

We consider written requests for repatriation of human remains and objects to relevant organisations on a case by case basis. We’re currently reviewing our processes on this and policy statements relating to return of cultural and natural heritage more broadly. We are also developing ways in which we can be more proactive in this area by considering and investigating the various ways in which material entered our collections. This is a large scale undertaking and needs time to commit to this review fully.

Our support for the ACCI claim was based primarily on the fact that the coat holds special significance for the communities which ACCI represents, and the wider region: Indigenous communities that are trying to rebuild their connections with their ancestors and their traditional ways of life. This includes having the opportunity to see and engage with material that they consider of profound spiritual and emotional value, on their own terms.

Repatriation of contested, stolen or secret/sacred objects has happened from across the UK over several decades. In recent years calls for repatriation and restitution of objects have increased as shown by the recent return of 43 objects to Australian communities by Manchester Museum.

ACCI comment that:
“This coat is valuable for our study of the arts because there are so many aspects of our traditional artistic practice that went into this coat. After many decades of genocide attempts, residential school removals and making ceremonies illegal, permanent custody of this coat means we would have unlimited and unrestricted access, to enable us to further understand the interrelated traditions, land based teachings, and language that this coat can unlock in the minds of our community members as we renew and strengthen our traditions using intergenerational knowledge transmission.”

The coat is currently on display in the Curiosity Gallery* at Bristol Museum and Art Gallery until its departure in the coming months. We hope to follow up with information on the return trip, its return home and new life at the ACCI, and the continuation of building relationships with the Cree Nation of Eeyou Istchee.

* We wish to point out that the name of gallery, ‘Curiosity’, is not meant to imply that Cree or any other culture is to be understood as a curiosity, in the way that ‘cabinets of curiosities’ were named in the past, which we understand would be disrespectful in this context. 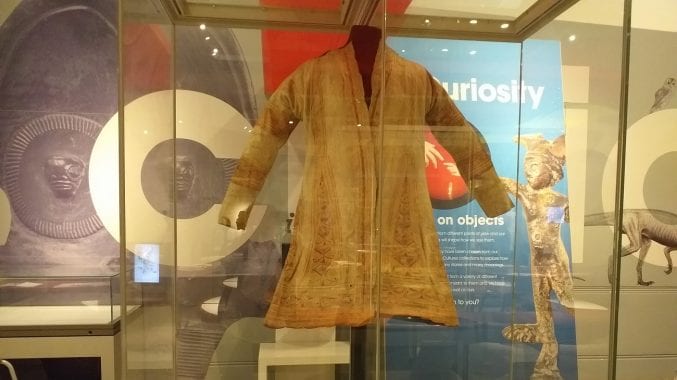