On 28 March Bristol Museum & Art Gallery officially returned the prehistoric remains and grave goods of individuals from the Tongva people to representatives of their descendants.

The small handover ceremony at City Hall in Bristol was a moving occasion for all present. There were tears, there was laughter, relief and hope, along with some sadness.

“As Native Americans, we are in constant state of mourning knowing that our Ancestors’ graves have been disturbed and their remains and burial goods removed to sit on museum shelves, all over the world, to be ‘studied’. Today we are joyful that we can bring our Ancestors back to the United States and rebury them in their homelands. We are grateful that Bristol Museum & Gallery have been gracious enough to work with us to make this possible.”  Desiree Martinez, archaeologist and Tongva descendant

These remains had been in the care of Bristol Museum & Art Gallery since their donation in 1921 by amateur archaeologist, Alfred Hutchins. He uncovered them when digging graves belonging to individuals of the indigenous Tongva people on the islands of Santa Catalina and San Nicholas.

Relic hunting by Europeans was a popular activity for commercial gain and private interest at this time. Museums received such material as part of their colonial endeavour to study and present information, as they saw it, on different cultures to their audiences.

In recent years museums have been challenged to hold themselves to different standards and responsibilities. We welcomed the official request in 2016 from the Ti’at Society, as representatives of the descendants of this region, to repatriate their ancestors for reburial.

The Ti’at Society became aware of the presence of their ancestors here when Dr Teri Brewer, then of the University of Bristol, began to investigate the material donated by Hutchins around 2012. Her investigations, in collaboration with the museum, brought together discussions from descendants, academics and other experts and resulted in the film A Donation to the Museum.

Many months of wrangling with permissions, export licences, airport protocols and communicating with the various people in the UK and California was required to make this return a reality. The reward was a sense of connection and collaboration that can only come when past hurt is acknowledged and amends are genuinely made.

This homecoming story follows on from those that took place here over a decade ago. Approaches from the governments of Australia and New Zealand, in 2006 and 2007 respectively, resulted in Bristol repatriating the remains of ancestors back to Aboriginal Australian and Maori institutions.

Today we continue to look for ways in which we can foster respect for different traditions and worldviews and help heal divisions between people at local and global levels.

Read more about this story on the New York Times website. 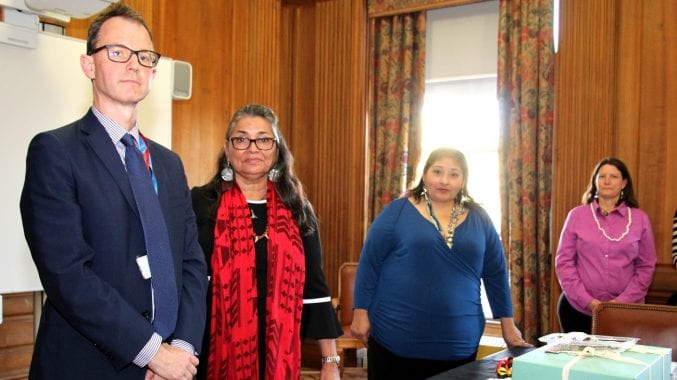