by Julia Carver, Curator of Modern and Contemporary Art

The film looks at the standing stones in Stanton Drew in Somerset which sit below the flight path of Bristol Airport. Mary’s film blends close-up footage of the ancient stones during a slow winter dawn with eerie imagery of planes coming into view. Initially the planes are unidentifiable, until the roar of the engines announce their presence.

Some of you may remember Mary Flower’s film, Through Whose Hand it Passes, that featured in the Schiller Gallery of Chinese ceramics in 2016. Mary has been fascinated by our old viewing screen above the steps in the Geology gallery for some time. People inadvertently come across a piece of moving image art while perusing the gems, rocks and fossils in the gallery. (Much like her Schiller Gallery film, which was as much about the atmosphere of the gallery as the Edgar Allen Poe short story it referenced).

For When Fire Burns Cotton Mary brought together a myriad of sources. Firstly she wanted to work with archaeology so we met with the our archaeology curator, Gail Boyle. Mary wanted to film the standing stones in Stanton Drew – partly because they are very unassuming, in a farmer’s field, and easy to overlook. Gail told us the history of interpretation of these stones. The legend is that they represented the petrified guests at a wedding.

Gail is interested in what archaeology can’t tell us as much as what it purports to. Mary also became interested in a philosophy known as Object Orientated Ontology. One of its theorists is Graham Harman. A central idea is that objects in the world have an existence we, as humans, cannot access. This seems prescient to the limitations of what archaeology can teach us.

Another subject in Mary’s film is flight. Stanton Drew is below the flight path for Bristol Airport so aircrafts regularly fly overhead.

Mary quotes text from Harman in her film to underline the strange juxtapositions. The title, When Fire Burns Cotton is a quote used by Harman to hint at the mysteries, or impermeability of objects.

Harman states ‘…fire burns cotton stupidly’ to suggest that cotton has an existence beyond being burned and that fire has no agency. The quote originates from an 11th-century Islamic theologian, Abu Hamid Al-Ghazali.

Ancient and modern. Unknown and quotidian. Human technologies from pre-history to our present. When Fire Burns Cotton brings these subjects together in a free-floating, open-ended, meditative film. 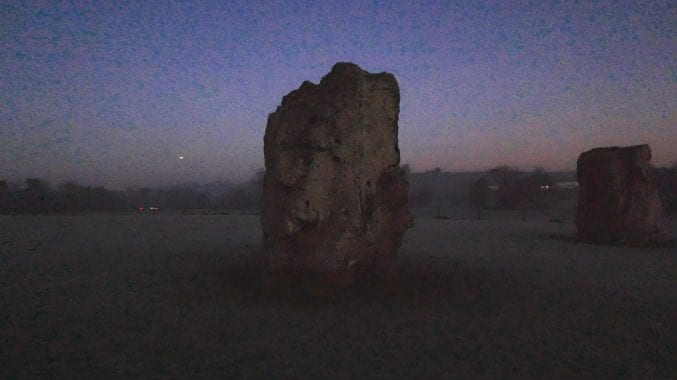