by Connor Heaney, Collections Manager at The Ray and Diana Harryhausen Foundation

Legendary animator Ray Harryhausen set the standard for how dinosaurs are viewed on screen.

The perfect subject material for stop-motion animation, Ray designed and animated these prehistoric creatures from his earliest experiments in the 1930s. Yet it was not until the late 1960s that he was able to showcase these terrifying creatures onscreen in a major motion picture. One Million Years BC (1966) was actually a remake of the 1940 film One Million BC. The earlier Hal Roach production didn’t include animated sequences. Instead the creatures were portrayed by gluing fins to live lizards or dressing stuntmen in dinosaur costumes.

It was felt that more believable creatures could be shown onscreen through Ray Harryhausen’s Dynamation process. This was a stop-motion technique which combined split screen with rear projection, allowing interaction between actors and animated models.

He was hired by Hammer pictures to create what would become the definitive on-screen dinosaurs, inspiring a generation of filmmakers. The movie would eventually prove to be British studio’s most profitable picture.

In one of Ray Harryhausen’s most iconic sequences, the Ceratosaurus battles with a Triceratops in a dramatic fight to the death. You can see models for both creatures on display in the Animating Early Man exhibition at M Shed.

This sequence was carefully choreographed in the weeks before animation. Both combatants had to move constantly throughout the fight to maximise excitement and tension. Despite a dramatic leap onto the Triceratops’ back (achieved with an aerial wire), in a break with tradition, this carnivore is killed by its opponent’s horns.

In 2018, this legendary sequence was referenced in Aardman’s Early Man, with two dinosaurs credited as ‘Ray’ and ‘Harry’ at the end of the film. The original models for both creatures were cannibalised shortly after the film was completed. They were reused for Ray’s next project, the ‘cowboys vs dinosaurs’ classic The Valley of Gwangi (1969). The models on display at M Shed are original resin stand-ins from 1966 and act as an invaluable insight into the original latex models seen onscreen.

As we look towards Ray Harryhausen’s centenary in 2020, his legacy lives on through the incredible collection which he left behind. Consisting of some 50,000 items, the archive cared for by the Ray and Diana Harryhausen Foundation forms one of the largest animation collections in the world – second only to the Walt Disney company.

The Foundation’s primary goal is to preserve, and where appropriate, restore Ray’s model collection. This ensures that these treasures will continue to inspire and entertain for generations to come.

When Jason and the Argonauts appeared on the television for the first time that was a big, pivotal moment for me. Even before that I remember seeing One Million Years BC. I was really into collecting models of dinosaurs and so to see these extinct animals moving around on the big screen was magical.
Nick Park, Aardman

My early exposure to all the leviathans of the Saturday matinee creature features inspired me, when I grew up, to make Jurassic Park. And the artist magician who breathed life into clay figures and wire armatures and made us, as kids, happily fear for our lives, was the dean of special effects, Ray Harryhausen. He inspired generations.
Steven Spielberg, DreamWorks

On Saturday 2 November, Connor will be in-conversation with Merlin Crossingham, Artistic Director at Aardman. Merlin and Connor will discuss the development and influences of stop-motion animation and take questions from the audience. The discussion will accompany a screening of One Million Years BC. Find out more and buy tickets.

All images © The Ray and Diana Harryhausen Foundation (Charity No. SC001419). 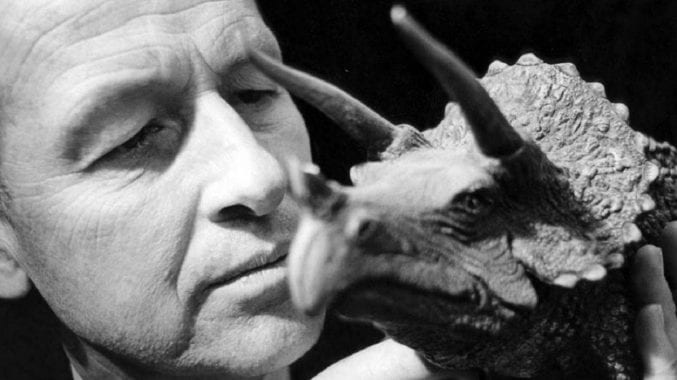