Last month Margaret shared her first experiences of life in Nairobi. Two months on she has struggled with a hospital stay and the departure of close friends, but is determined to remain positive… Many things have happened since last I wrote in this book and the mail from home arrived last week. Some letters were missing and some news was bad, but they had received my Cape Town mail alright.

Tommy went off on May 24th had only a day’s notice, and is now in Dar es Salaam.

The musical comedy “Santa Palma” has been a great success, and alas I wasn’t in it after all. I’ve been on sickleave for over a month and only came out of hospital four days ago. I hoped and hoped that I’d be well for the play, but it was no go. My partner in nearly everything right through it (Corporal Berry) wrote me such a nice note as if from “Santa Palma” saying the last scene was now best of all and that he was tired of waltzing about with a music-stand, awaiting my return, so he hoped I’d be back again soon. Of course I had lots of time on hand, so replied in rhyme and got a delightful answer. We were Spaniards and always called one another Carmenetta and Giuseppe, had done from the early rehearsals, and had great fun over it all. One delightful concert we went to at the Garrison Institute, Giuseppe, Jock Munro, Eleanor and I, we had some fun over a pinched rickshaw and were all very gay.

There are big changes in the Bungalow. Eleanor and Peggy have gone to Mombasa and like it very much, the office is much nicer than ours here, and there is a tiny Bungalow for two. I miss Eleanor, but I’m glad Florence has got the room next mine which was hers, I like Florence next best. The two new girls from Mombasa are here, and Miss Wilkinson, a head girl, has returned from leave in the South.

The weather is cool, often cold. There’s a lovely evening glow now. Florence and Jo have gone off motoring to Claremont with Freddy Mayberry and Mr Cole. I like Freddy. Cousin Peter came to tea on Friday and brought me a lovely box of chocs, I’m glad I have such a nice Cousin out here.

I believe I’m missing Tommy tonight, he was always so dependable and such good company. Ah well if I’m getting down in the dumps I’d better stop writing this, it’s nearly my bed time anyway (6pm), what it is to be an Invalid! by one who knows.

Next month Margaret is transferred to a rural location where she gains more first experiences: visiting a POW camp and travelling on the outside of a train. 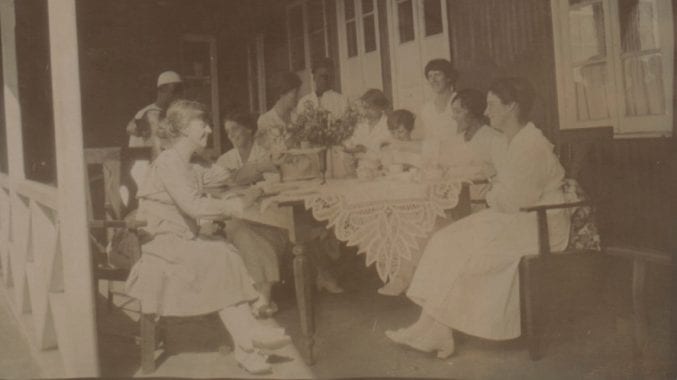