The Old City walk takes you to the historic heart of Bristol.

Along the way we stop at locations which saw the birth of the city, its growth and later decline as a major seaport and centre of commerce.

It’s the perfect way to discover some of the events, people and places that earned the city a place in national history, culture and the arts.

A city of adventurers Standing at the end of Narrow Quay is Stephen Joyce’s statue of John Cabot. For me, this bronze statue of a mediaeval sailor staring over the harbour towards the open seas beyond captures the spirit of Bristol.

It is a reminder of the generations of seafarers and adventurers who have voyaged from this city seeking the boundless possibilities of other countries, continents and peoples– and that free-spirited outlook still resonates in the city today. I particularly like the obvious tactile appeal of the statue; and the way the bronze has been burnished by the hands of thousands of visitors. Another indication of Bristol’s independent spirit can be seen on the clock face on the Exchange in Corn Street. The clock has two minute-hands. This can be quite mystifying for sightseers who don’t know the story behind it. The reason it has two is because one indicates the time in Bristol and the other the time in London. Before the age of railways, towns and cities each had their own local times, based on the solar day.

In solar terms, Bristol is roughly ten minutes behind London – and that’s the time that used to be shown on our clocks and watches. But the railway changed all of that, because a standard time was required for the timetables – and London time, otherwise known as Greenwich Mean Time, became the standard. When Bristol was forced to adopt Greenwich Mean Time, instead of doing away with Bristol time altogether, a second minute-hand was added to the clock on the Exchange to show both.

M Shed’s historical walks are led by volunteer guides with a wealth of knowledge and an infectious passion for their subject. All the walks at M Shed are free, donations are gratefully received, and bookings can be made on the day at reception.

Find out when the next Old City walk is.

Other blogs in this series: 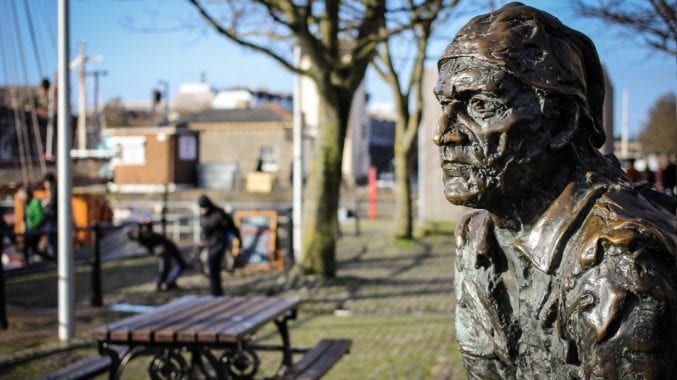