The Floating Harbour walk takes you on a trip into Bristol’s old docklands.

Along the way we highlight the city’s maritime heritage with the aid of a variety of historical photos, plans and maps.

We begin by discussing the reasons why the Floating Harbour had to be created, but it’s really only when we get to Underfall Yard, the locks and the Cumberland Basin that it becomes clearer what it all means.

People are amazed when we show them the changes that occur in the harbour. Even Bristolians on the tour rarely realise why some areas of water stay at a constant level and others always go up and down.

On days when we strike lucky – when the Cumberland Basin and both locks are empty – you can see the sheer scale of the works. The hydraulic accumulator and engine house at Underfall Yard, which once powered the docks’ hydraulic system of cranes, bridges and locks. Image © David Blackburn. The Matthew, a replica of the type of ship sailed by John Cabot in 1497, on the patent slip at the Underfall Yard, 2013. Image © David Blackburn.

Invented in 1818, a patent slip is a structure for hoisting a boat or a ship from water to land up an incline. It features a cradle onto which the vessel is loaded and a mechanism for hauling the cradle out of the water. It provides an inexpensive and relatively straightforward means of undertaking hull repairs and maintenance.

Underfall Yard Now and Then The hydraulic accumulator and engine house at Underfall Yard, as it was in 1967. This photo was taken as part of an industrial archaeology project at Hartcliffe School.

Most people are familiar with the tourist view of the Floating Harbour, but they are fascinated by being shown the Cumberland Basin with its system of locks and the functions of the work yard from where it’s all controlled. Many have no idea of how Bristol developed because of the enormous tides here and how they ultimately had to be “tamed” to cope with the demands of the developing port and city of the 19th and 20th centuries. A combination of adverse weather and high tides often results in the ‘over-topping’ of the River Avon, as seen here at the Cumberland Basin, February 2014. Image © David Blackburn. The entrance to the City Docks from the River Avon, showing MV (motor vessel) Alwin Klein at Cumberland Basin, c.1950

The Bull Dog – an unusual craft The dredger workboat Bull Dog, pictured here off Underfall Yard, c. 1896, was an unusual and possibly unique craft. Besides being a tug, it had a steam crane which could be used for dredging, maintenance and salvage work around the port. It carried a variety of equipment, including pumps for fire-fighting and even a strengthened bow for ice-breaking. A steam-powered generator meant it could use lights for night work. It was built in 1884 at Chepstow and remained in service until 1952.

Main image: A view of the entrance to the Cumberland Basin, A Bond, B Bond and C Bond warehouses from Clifton Suspension Bridge, 2011.

All the historical walks at M Shed are free, donations are gratefully received, and bookings can be made on the day at reception.

Find out when the next Floating Harbour walk is.

Other blogs in this series: 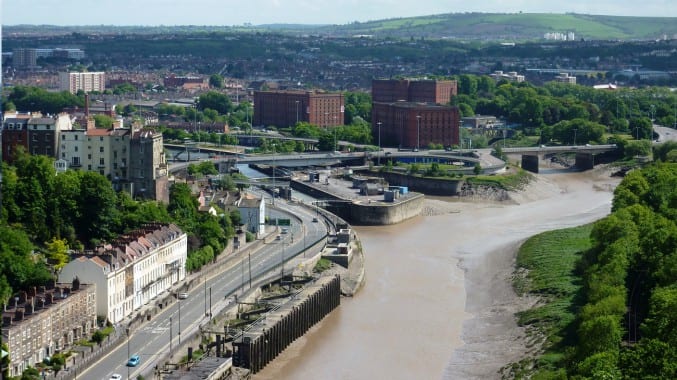