Some of the original glass tubes containing sea floor sediments collected during the expedition.

It’s amazing what you find when you’re looking for something else in the geology store at Bristol Museum & Art Gallery. Tucked away under shelves that carefully hold the fossils of Ice Age beasts in the geology store were two old wooden boxes labelled in faint pencil: ‘HMS Challenger’ – how exciting!

The HMS Challenger expedition set out from Portsmouth in 1872 and was the first around-the-world expedition to explore the life, chemistry and the physics of the deep open seas of the world.

The expedition visited many exciting and distant places and collected many samples of sediments and animals alongside countless scientific measurements. On their return in 1876 the collections were distributed to many museums and institutions for scientists to study. Exeter’s Royal Albert Memorial Museum has undertaken a project to reunite all these collections, have a look at their website to learn more.

So how did Bristol Museum & Art Gallery end up with collections from this important expedition? This is due to one man: Frederick Gordon Pearcey (1857 1927).

Pearcey was born in Middlesex and joined the Challenger expedition in 1872 at the age of fifteen or sixteen, making him the youngest member of the expedition. During the expedition Pearcey was a taxidermist and general scientific assistant. On the completion of the voyage he assisted Sir Wyville Thomson and Sir John Murray in the Challenger Office at Edinburgh. Here he gained skills in identifying species, especially of foraminifera (microscopic organisms that are very beautiful and often used for dating rocks), on which he wrote several papers. Fifty volumes were written on the expedition, with a total of nearly 30,000 pages and took nearly twenty years after the expedition to be written.

All the reports and various maps from the expedition are available online. Three examples of original glass vials containing deep sea sediment collected on the HMS Challenger expedition (1872 – 1876). The labels indicated the name of the sediment, what station number it was collected from and from how deep, in fathoms!

During Pearcey’s time at Bristol he made a series of models of his favourite foraminifera which were made of glass and plaster. Pearcey also used his taxidermy skills and worked on various specimens, some of which are still in the collection today. Pearcey died on January 26th 1927, at the age of seventy in Newport, Wales (you can read his obituary). He was the last surviving member of the Challenger expedition. He is still remembered today as one of the earliest scientist to work on foraminifera, and we are very lucky to have this material in our collections.

Material from HMS Challenger will be on display at Bristol Rocks! our family Geology Take Over day on Saturday 9 April at Bristol Museum & Art Gallery. 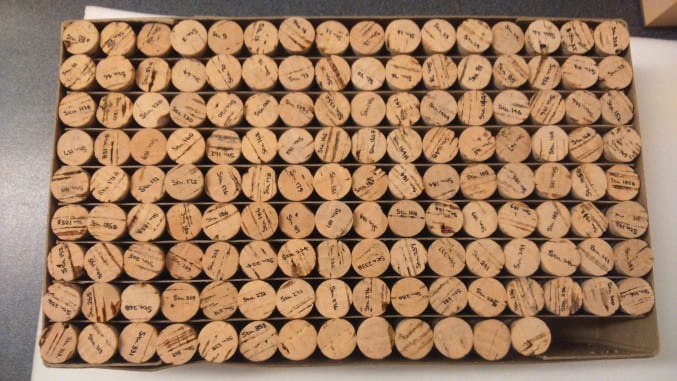