The Tokyo 2020 Summer games may be over, but you can still enjoy Japanese culture here at Bristol Museum & Art Gallery.

We look back on the events of the Olympic and Paralympic games and pair them with 20 works of Japanese art from our collection. 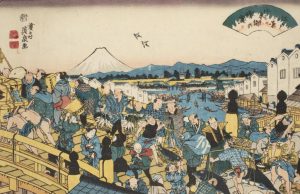 In the midst of a global pandemic, Tokyo 2020 was a Summer Olympics like no other. There were no spectators or tourists allowed and Tokyo was quieter than anticipated. The bustling scene in this print from the 1840s shows people crossing Nihonbashi bridge in the heart of Edo, old Tokyo.

Look closely and you can find traders carrying fresh fish, vegetables, and people pushing a heavy cart loaded with barrels of sake, rice wine. In the distance is the military ruler’s castle and Mount Fuji. 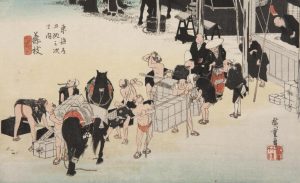 In the days leading up to the Olympic and Paralympic games, teams of athletes arrived at Haneda airport with all their gear.

We were reminded of this print by Hiroshige showing the changing of horses and porters at Fujieda, the twenty-second station along the Tokaidō Road, the main road that connected Kyoto to Edo, old Tokyo.

I wonder if the travellers in this print were headed to Tokyo too? 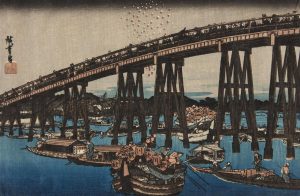 Perhaps the most dramatic moment of the Olympic Opening Ceremony was the fireworks and drones.

Fireworks are traditionally held in the summer in Japan. They were a very frequent evening entertainment during the Edo period. They became so popular that by the mid-seventeenth century the threat of fires led authorities to issue decrees restricting the use of fireworks on the Sumida river in Edo, old Tokyo. 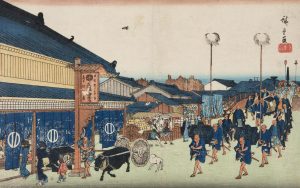 This print of a procession through Edo looks as if it could be showing the Parade of Nations.

It actually depicts the mandatory ‘alternate attendance’ of feudal lords, who were required to alternate living for a year in Edo and a year in the domain they ruled. Their wife and children lived in Edo, essentially as hostages. 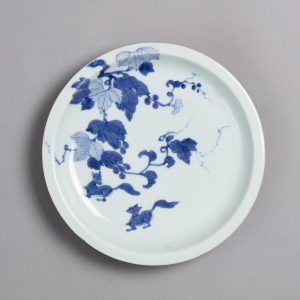 Martial arts have a long history in Japan and this year’s events were held in the Nippon Budokan.

The arena was built for the Tokyo 1964 games when judo first debuted as an Olympic sport.

At first glance this dish may seem unrelated to martial arts but it is in fact a pun. 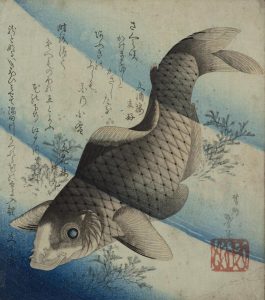 The ripples in this print by Katsushika Taito II (active 1810-1853), a pupil of Katsushika Hokusai (1760-1849), give the impression of a carp swimming against the current.

In Japan, a carp swimming upstream symbolises perseverance and the overcoming of obstacles. 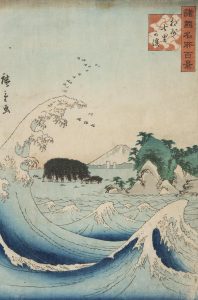 The Olympic sailing competitions took place in Enoshima at Enoshima Yacht Harbour, to the southwest of Tokyo. This woodblock print by Andō Hiroshige (1797-1858) shows the same harbour 162 years ago.

Framed by the wave is the forest-covered Enoshima island and the snow-capped peak of Mount Fuji in the distance. 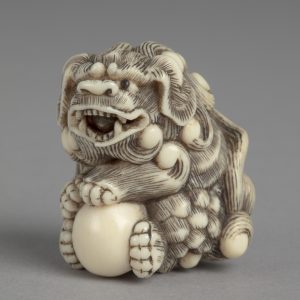 Holding a ball in its paws, this shishi lion looks as though it is ready to play a game of football.

Pairs of lion statues guard the entrances of temples and shrines in Japan.

In the open mouth of this netsuke carving is a loose ball that appears and disappears when the netsuke is moved. 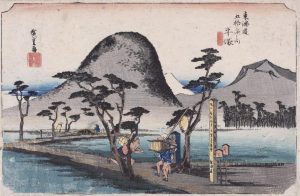 Look closely in this print by Hiroshige and you can see a figure running in the landscape.

This person is a hikyaku, a courier who ran long distances to deliver letters, documents and packages across Japan.

That is one very athletic postman! 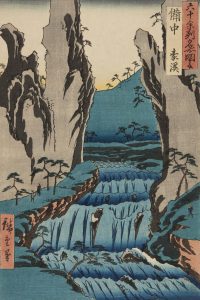 Oh to canoe down the rapids in this Hiroshige print…

From the series Famous Views of the Sixty-odd provinces, this print shows the Makidani river coursing through Gokei valley, a place famous for its strange rock formations. 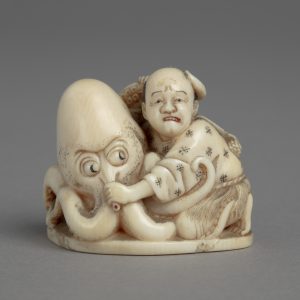 This netsuke carving shows a fisherman wrestling with an octopus. The fisherman’s expression suggests that he knows he is in trouble.

He pulls on the octopus’ nose – how effective would that be? 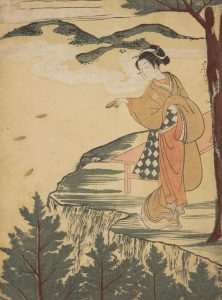 This woodblock print by Suzuki Harunobu (1724-1770) shows a woman throwing clay dishes over a cliff in a religious ritual that is said to be effective in getting rid of misfortune.

I wonder if that is how the clay targets are thrown in the Olympic event? 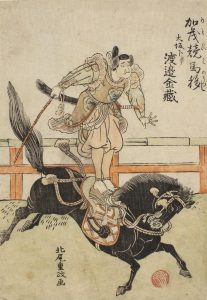 With five medals in the Olympics and eight in the Paralympics, Great Britain won a total of thirteen medals in the Tokyo 2020 equestrian events.

This print by Shigemasa Kitao (1739-1820) shows Kinzo Watanabe performing in a circus in Osaka. It looks like it was quite the performance! 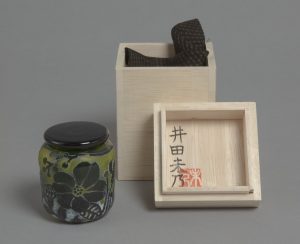 This glass tea caddy was made in Izu in 2016 by the artist Mino Ida (b. 1969). It is decorated with the wild flowers and foliage local to the western Izu area. 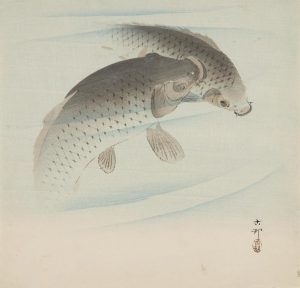 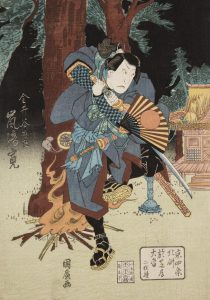 ParalympicsGB won a total of five medals in the wheelchair fencing.

It may not be fencing, but this print shows the kabuki actor Arashi Rikan playing the role of Kanai Yagorō drawing his sword for a fight on stage. 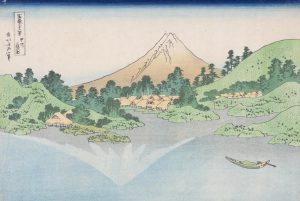 The road cycling races took place in the foothills of Mount Fuji at Fuji Speedway.

This Hokusai (1760-1849) print shows a reflection of Mount Fuji in Lake Misaka. Look closely and you will see that the reflection is different from the mountain. Together, the two Fuji mountains represent summer and winter. 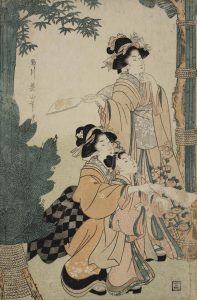 Have you heard of the game hanetsuki? It is a Japanese game similar to badminton that is traditionally played at the New Year.

The objective of the game is to keep the shuttlecock in the air – the longer it stays in the air, the more luck one has in the coming year! 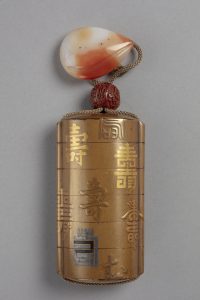 Inrō were used for carrying small personal items such as medicines, stamp seals, and coins. 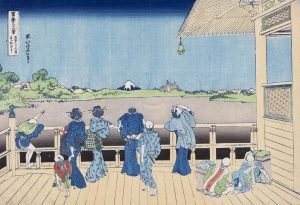 As the Tokyo 2020 Summer Olympics come to an end, we wave goodbye to Japan. 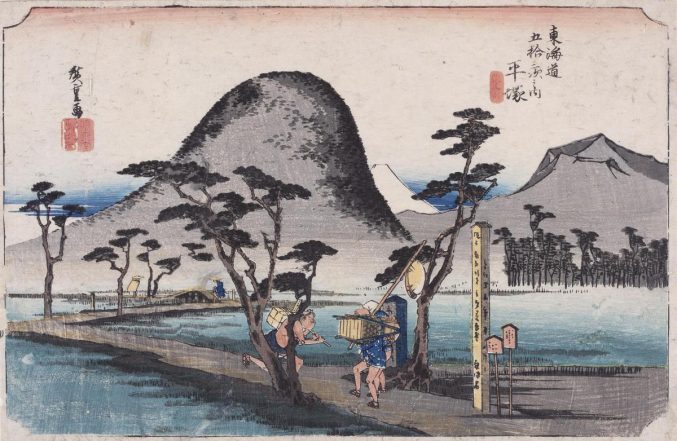