There’s an exciting year of activity in the coming 12 months to look forward to. Here’s some of the highlights to give you an overview and idea of the year ahead. We’ll be bringing the city a fantastic line-up of temporary exhibitions and events, and of course there’s lots going on as we speak – take a look at what’s on for details.

Modern Art in Britain: Reality Questioned – A redisplay of some of our finest 20th Century British Art. Opens in the Balcony gallery at Bristol Museum & Art Gallery on 17 January.

New York City Apartment/Bristol – Do Ho Suh’s art installation of his flat in NYC will follow on from the Ahead of the Curve exhibition, opening at the end of March in Gallery 5 at Bristol Museum & Art Gallery.

The Age of Enlightenment – A newly hung and interpreted gallery of (mainly) European paintings from the 18th century in Gallery 4 at Bristol Museum & Art Gallery.

Postcards from Bristol – Photographs of early 20th century Bristol from the Archives will be on show at Bristol Archives from 17 March.

A Journey to the Centre of the Earth – artists Wood & Harrison in a new commission responding to the Geology collections. September to December in the Balcony Gallery, Bristol Museum & Art Gallery. Open for Business, 21 March – 21 June 2015, M Shed
Open for Business is a major documentary photography project that portrays British manufacturing industries in nine cities through the eyes of internationally renowned Magnum photographers. Bristol-based Magnum photographer Martin Parr has photographed local manufacturing companies and represented in the exhibition are aerospace and defence giants Airbus and BAE Systems, precision engineers Renishaw, and other well-known businesses such as Cameron Balloons and Aardman Animations.

William Hogarth: Painter and Printmaker, 16 May – 31 August 2015, Bristol Museum & Art Gallery
This will be the most comprehensive showing of the artist’s work ever in Bristol and the South West.  For the first time, the national collection of British Art, TATE Britain is loaning its entire holdings of oil paintings by William Hogarth to a regional museum and Bristol Museum & Art Gallery is proud to be the only selected partner.

Nature, Camera, Action! 18 July – 1 Nov 2015, M Shed
Another flagship exhibition which forms part of the city’s official Green Capital programme. It highlights Bristol as a global centre for wildlife filmmaking within the international framework of this exhibition, developed by the BBC and the National Media Museum, Bradford.
The deepest oceans, the coldest continents, the most fearsome animals – wildlife film-makers and photographers have faced it all in pursuit of the perfect shot. Explore the challenges they face and the amazing kit they use, in this exciting exhibition for the whole family.

Art Forms in Nature, 4 July – 13 September 2015, Bristol Museum & Art Gallery, Temporary Exhibition Gallery 2
Also part of the city’s official Green Capital programme, this touring exhibition from the Hayward Gallery, Southbank, is an exquisite display of beautiful photographic images of close-up plants taken in the 1930s. Karl Blossfeldt (1865-1932) was a German photographer celebrated by the Surrealists and early modernists for his pioneering close-up images of plants and flora. Trained as a sculptor he was also an amateur botanist, fascinated by the underlying structures of nature. Death, 24 Oct 2015 – March 2016, Bristol Museum & Art Gallery
We will take a cross-collections approach displaying rarely seen objects from our world cultures, archaeology, biology, industrial and public history, applied, fine and contemporary art collections, to offer new perspectives on the subject of death. The visitor will be able to journey through the exhibition exploring different pathways people from around the world and across time have taken from dying to death to final resting place. At points throughout this journey they will be able to explore themes such as the idea of a good or bad death, the ethics of the use of human remains, creative responses to death and what does death mean? Read a curators’ update on how the planning for the exhibition is going.

There’s a rich programme of behind the scenes tours, local history walks, lectures, seminars and special events such as Museums at Night, The Nightingale and the Rose and Chinese New Year.

The Red Lodge Museum and The Georgian House Museum reopen in Easter and run to the end of October, and we’ll be planning lots of activities at these sites.

Bristol Archives and Blaise Castle House Museum are open all year round and Kings Weston Roman Villa will have open days too. Keep an eye on what’s on for details.

Major events in the city’s calendar to look forward to include Bristol Harbour Festival from 17 to 19 July, Make Sunday Special starting again in May, Bike Rides, sports events and many more festivals and public events including a new Circus Festival in Autumn to look forward to, as well as more interesting exploits in The Control Room and the Edwardian Cloakroom.

We’re planning lots of activity relating to Bristol 2015 – European Green Capital, including a giant Blue Whale made from recycled materials, boats in Leigh Woods by Luke Jerram (who did the Park & Slide on Park Street last year) and there’s a big exhibition by Richard Long at Arnolfini.

It’s going to be a bumper year for culture in Bristol – and plenty for us all to get involved in! 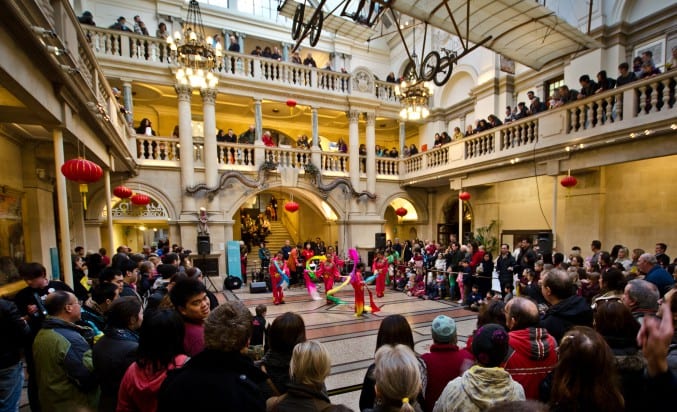