As we prepare to open the doors to our Bristol Music exhibition, we caught up with Ian Matthews – born and bred Bristolian and Kasabian drummer – to quiz him on his best Bristol music moments…

Growing up Bristol, what gigs did you go to and where?
Back when I was little I would be taken to the Hippodrome to watch the big musicals that visited. I remember being spellbound by the pit bands, especially the drummers. I also got taken to Colston Hall to watch the great Buddy Rich and his band. That was an experience! Later on in my late teens I used to watch bands at the Fleece and touring bands at the Bierkeller. I remember watching Dream Theatre down there on their first UK tour. An astonishing show.

Tell us about the first records you bought…
The first album I bought was Live After Death by Iron Maiden. Recorded on their tour in L.A. I loved that record and wore it out! My parents record and tape collection were my first experience of music. I remember car journeys of Leo Sayer, Hot Chocolate, Dr Hook and the Great War Themes of Ron Goodwin! I think the first tape they bought me was The Muppet Movie soundtrack, and I also had the double vinyl of the Grease Movie too. But hidden away in their collection from back when I can remember was the single of Don’t Stop Me Now and Jonathan King’s Everyone’s Gone to the Moon.

When did you start playing in Bristol and what were those venues like at the time?
I started playing live music when I was 7. That first gig was in the back room of The Globe in Wells. Back then I’d been learning to play for a few years and could keep up with the social club dance duo’s and trio’s. I could read so I could also cope with the cabaret acts that would do their guest stint during the night.

When I was a little older I got work playing the town’s theatres. I did pit work at the Hippodrome, and also The Little Theatre (now the Lantern), the Redgrave, and various other halls where amateur dramatic companies would put on shows. I was around 14 when I first played The Old Duke with The Bluenotes Jazz band. I also got to play Colston Hall quite a bit.

I did a lot of playing with brass bands, big bands, a marching Band called The Troopers and The Miltary Band of the Avon And Somerset Fire Brigade as well as county schools orchestras. I also found myself doing events like the Bristol Balloon Fiesta in Ashton Court. I got about in those early years!

It wasn’t till later when I got involved with the Bristol rock scene that I started to play the Bristol venues. I seemed to play a lot at the old Bristol Bridge pub which has long gone, Bierkeller and of course The Fleece, Thekla, and then later on Fiddlers in Bedminster. I also remember being involved in acts that used to enter the Keynsham Cadbury Club’s annual talent shows! Wow this is dragging up some memories! Then came Ashton Court Festival and the then infamous benefit gigs. Catch 22, you wouldn’t get on the bill without doing at least one, but once done you might still not get on the bill!

What was Ashton Court Festival like?
Ashton Court festival was actually a great little festival. I did my first proper big one there to thousands of people on the second stage that was in a sort of natural bowl so the audience looked down and around you. Because it was all Bristol bands and I was, at one point, in 14 of them at once it could get busy for me. I’m sure one year I had like six or seven gigs over the weekend. Later that translated to the small stages at Glastonbury festival, the mother festival. I did some miles traipsing around that site carrying drums.

Which bands / musicians have you played with in Bristol?
I’ve had the joy of playing with so many wonderfully talented artist in Bristol over the years. And through that I have learn’t so much. Many would remember bands such as K-Passa and of course Doreen Doreen which are still very much going. But in the past I’ve been involved with CCQ, Sissi, Jesse Morningstar, The Sound Disciples, The Blue Areoplanes, Ilya, and many of the cities jazz artists such as The Dave Salt Big Band, The Manhattan Jazz Orchestra, Andy Sheppard, James Morton, John Pearce, Dave Newton, George Cooper, Jamie Cullum, Andy Hague and so on.

I’ve also recorded with and for two of the cities great producers in Stu Jackson and Dan Brown. The list goes on and I feel bad for not shouting out everyone. I would like to mention the late Eddie Clayton though, once Bristol’s primary drum teacher. He basically dropped me as a 12 year old into the heart of the jazz scene.

What are your most enjoyable memories of recording and making music in Bristol?
Live wise, I’ve always been busy and overcame any confidence issue with that at a young age. Recording was different. I only got into it by doing demos with the bands I was in. My first demo was with the first rock band I joined called Of One Skin. As I passed through different bands I got to do these recordings from time to time, but I was nervous as hell and it would ruin my performance.

Later on I got more involved with Jim Barr and Jesse Morningstar at their studios in Easton on Mivart street working on various projects. Dan Brown would also get me in for regular sessions as he worked with more and more artists. I also got to work quite a bit with Matt Sampson and Bink Bonk studios when his studio was under Treblerock studios up in Cotham. It was Matt that actually hooked me up with my first sessions with this young band from Leicester. They needed a drummer and he thought I would be perfect. It was only a demo. They were an unsigned KASABIAN. Tell us about one of your favourite times in Bristol…
My favourite time in Bristol? Watching the racing boats hammering up and down the docks when I was a kid. A deadly race that eventually had to be stopped due to it, well, actually killing the drivers. Oh the 80’s.

What do you think of Bristol’s music scene?
I feel so lucky to have been brought up in such a vibrant diverse musical city. Back from when I can remember to today there has always been such a wide variety of talent and music on offer here. When I decided to give it a proper go at living from music I knew I had to really step up my game to be able to hold water in the scene here. Drummers like Mike Hoddinot, Eddie John, Laurie Hedger, Toby Pascoe and Tony Orrell amongst many others.

Do you have any favourite Bristol bands / musicians and who should we look out for?
Bands coming out of Bristol to watch right now for me are Idles and This Is The Kit. Both utterly brilliant in very different ways.

What did you think of the Bristol Music exhibition?
I really enjoyed it. I was fascinated by the depth of history of the Bristol music scene, and was impressed by your openness for visitor input – sharing memories and corners of knowledge. I highly recommend a visit.

Bristol Music: Seven decades of sound is open at M Shed until 30 September. 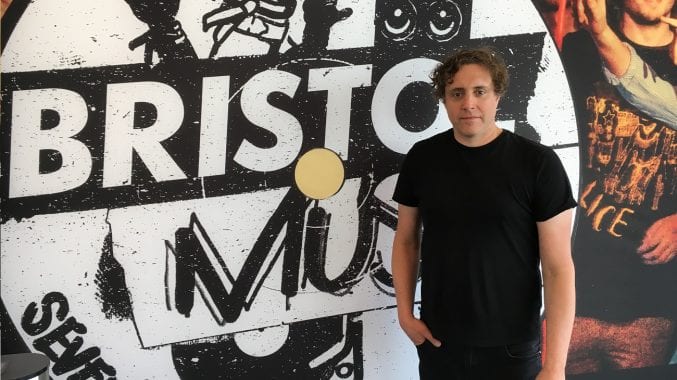