So many visitors to the Moved by Conflict exhibition at M Shed (11 October 2014 – 1 March 2015) told us how much they were moved by the stories of Bristol people and how they were affected during the First World War.

We posted lots of these on Facebook, and thought you might like to read some of the stories and see some of the objects here. So here you are:

Bedminster, 1915, this sign hung in the home of Albert Henry There was intense pressure on men to enlist prior to conscription being introduced in 1916.

Recruitment posters employed shame and guilt to convince men to join up. Men in civilian clothes were handed white feathers in the street, accusing them of cowardice.

This sign was a way of telling the neighbours that a man from this family had enlisted, and would have added to the pressure on other men to do the same.

Albert was not at home, he was away fighting the First World War. He was 18 years old.

Gloucester, 1916, Wedding dress and dress box of May Evelyn Roach May married Edgar George Whitcombe from a neighbouring farm. Soon after the wedding, Edgar was sent to fight on the Western Front.

He went missing during the Battle of the Somme, and only his wallet was recovered. He was posted missing on 1st of September, and by October all hope was lost.

May wrapped her wedding dress in sheets of the Bristol Times and Mirror newspaper, and stored it in the box in which it had come from the dressmakers. It was still there when she died, aged 91 in 1984. She never remarried. The dog is staring longingly out of the window, waiting patiently for his master to return from the First World War. However, the condolence scroll on the wall tells us that his master Sapper Alexander Murray of the Royal Engineers has “…passed out of the sight of men by the path of duty and self-sacrifice…”. That he gave up his own life “…that others might live in freedom”.

We don’t know whether the painter Robert Morley knew Alexander Murray but he did understand the emotion: his two nephews were both killed in the war.

What we do know is that this terrier’s master will never come back. He later retitled the work as public opinion shifted from patriotic enthusiasm to exhaustion.

After a period as a volunteer ambulance driver, Nevinson became an official war artist for the War Propaganda Department. About 10 million embroidered postcards were made. Women embroidered the pictures, which were then sent to factories in Paris (which was outside the war zone), where they were glued into the postcards.

British soldiers sent them home to their mothers, sweethearts, wives and children. Guthrie Watson-Williams went to Clifton College and at age 19 he joined the Royal Artillery. A year later he was in France in charge of a gun team. From 1916-17 he was in the Somme on forward observation post duty, a dangerous job close to the enemy frontline ‘surrounded by mud and utter desolation’. He devised a system to tell his parents where he was in his letters. This was against the censorship rules as any information could be helpful to the enemy.

In March 1917 he was wounded and sent back to Britain to be treated for shell shock. His mother visited him at Craiglockhart Hospital, and wrote to his sister that he ‘looks awful, years older’ and that on discharge he needed ‘quiet, food and nothing to worry him…no sudden noises etc…’ Sister Alice Sampson ran the Riddle Ward at the General Hospital in Bristol. She joined the Territorial Forces Nursing Service before the First World War: like the Territorial Army, the TFNS nurses continued their normal job but prepared for war.

She was sent to No. 16 General Hospital in France, at Le Tréport, near Dieppe. Base Hospitals were often at the coast, somewhere with good rail links, to allow easy transport of the wounded from the Advanced Dressing Stations and the Casualty Clearing Stations at the front, and if needed, home to Britain.

Sister Sampson was Mentioned in Dispatches in 1917 ‘for gallant and distinguished services in the Field’. She was awarded the Royal Red Cross in 1919 for outstanding nursing service to the Armed Forces. This photograph of Elsie Pearce was carried by her fiancé Albert Clark while he was fighting in France.

In the early months of the war, Elsie sent Albert a recruiting flyer on which she had written that she wished that women could join up to do their bit, as well as men. Albert enlisted in November 1914 and was sent to France in March 1915. When he completed his will in the back of his soldier’s pay book, he left everything he owned to Elsie.

Elsie and Albert were married in July 1915, when Albert was at home in Bristol on leave. He was wounded a month later, and was invalided out of the army in 1916 after being wounded by shrapnel. After the war, Elsie and Albert had a daughter, Berna, and enjoyed 35 years of marriage until Albert’s death in 1950. 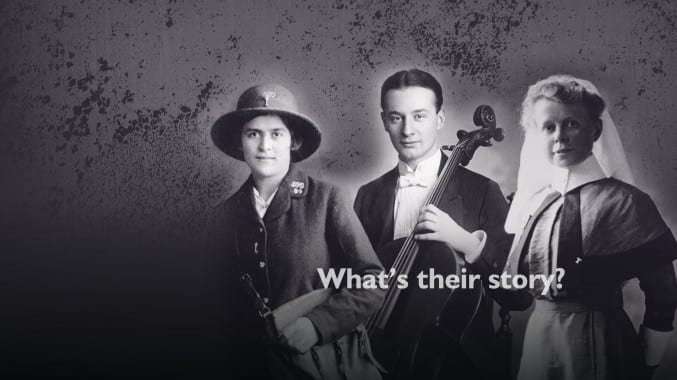