I’ve been a volunteer with the British Empire and Commonwealth Collection for just over a year and one of the pleasures has been the involvement with stories of lives connected with Empire, a form of time-travel I’m quite captivated by! My most recent project was particularly fascinating, taking me back to the late 1920s/early 1930s on the North West Frontier, and the life of Air Commodore Leonard de Ville Chisman DFC CBE.

Chisman was a key figure in the newly expanding RAF, which after World War 1 was exploring the role of flight in policing the outposts of Empire. He was stationed in Quetta in Baluchistan, close to the Afghan frontier, where the British had a strategically important cantonment.

His hobby was photography and film, and his output over this time depicts much of his service and private life. In one of the photo albums there’s a unique series of aerial views of Quetta. This city was almost completely destroyed in the devastating earthquake of 1935, the aftermath of which he also recorded.

At this time Chisman was leading forays over remote areas of the Frontier, filming from the air and on the ground. One sequence follows an army convoy to a tented camp, where a British army field battery is drawn up on a hillside shelling a distant target. At the airstrip a cheery young pilot holds up a leaflet in Pashtun before leaping into the cockpit of one of the biplanes waiting to take off. Enid Harries says goodbye to her husband Stafford Harries before a flight, 1930s

Leonard Chisman films the planes air to air as they drop leaflets over the landscape below, their text warning local tribes not to give shelter to followers of the insurgent warlord the Fakir of Ipi. A later sequence of aerial bombing over a similar landscape is a chilly Imperial demonstration of what happened to those who ignored the warning.

Chisman’s films are so well made, with a flair for small details and an effortless composition of larger groupsand landscapes that you watch them with an uncanny sense of familiarity for this young officer and his wife. You are a spectator alongside them as they drive over the mountain passes to holiday on houseboats in Kashmir or to hill stations in Simla for a summer wedding.

You voyage with them on leave to Shanghai and Japan, passing ships beached in a typhoon, harbours busy with troopships and junks, or sailing on a grand liner to the UK on home leave.  Chisman’s wife, the elegant Rosamund, leans over the rails watching flying fish and dolphins, traders in the ports, and the passage through Suez. At home in Peshwar, where they moved after the earthquake, you watch her living the privileged life of a memsahib. You see her pruning roses in her garden, training a dog, leading out her horse, Indian groom, gardener, chauffeur to the side. You are the camera that looks into their eyes. There’s a Sikh, a Muslim, a Hindu. You uneasily read the future in their returned gaze only now, knowing the history that lay a decade ahead with Partition.

In the last reel of the films a baby appears, and her childhood provides a charming sense of closure as the couple return to Britain. The baby’s name was Wendy, and it was she who donated her father’s collection to the archive.

Last October we contacted Wendy Keal, who agreed to meet me at Bristol Archives and it was with a sense of happy familiarity that I met her, so many years after her parents had lived in India.  Wendy also brought with her six more photograph albums, and a treasure trove of stories about her parents. It’s been a delightful postscript to my time-travel with Leonard Chisman!

2 comments on “Come fly with me: Early days of the RAF in India” 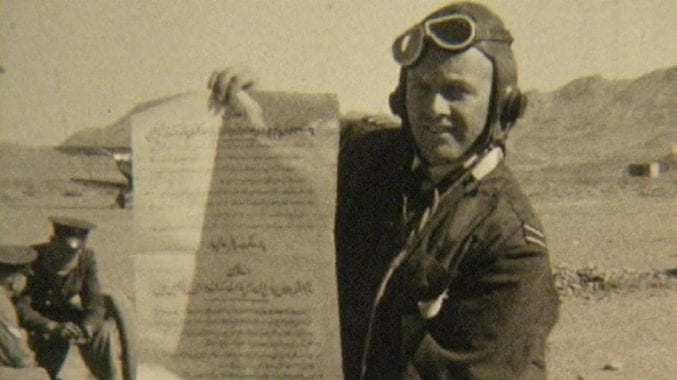