Work is well underway refurbishing the Old Masters gallery by taking down the old damask wall covering and giving it a new coat of paint, as well as repairing the ceiling and dealing with various other challenges that old buildings present.

At the same time, this refurbishment gives me, the paintings conservator, the opportunity to carry out work on some of the pictures that will go on display in the gallery when it re-opens in May. Some of those are paintings that have recently been on show, and others are ones that have been waiting patiently for conserving so that they are ready to be put on the walls.

One painting that’s currently being treated is a jewel of the collection, Willem van de Velde’s A ‘Smalschip’ with Sail Set at Anchor Close to the Shore, and a ‘Boier’ Laid Ashore (1650-60). This painting has been a fixture of the gallery for many years, but had started to appear quite yellow and dirty. It came off display last year so that another painting, Dutch Cavaliers and their Ladies making Music (1631) by Pieter Codde could be shown (after it too had been conserved), and so that I could assess the painting’s condition. Willem van de Velde’s A ‘Smalschip’ with Sail Set at Anchor Close to the Shore, and a ‘Boier’ Laid Ashore (1650-60) during conservation

That assessment showed that it was the non-original varnish which had discoloured and become yellow-brown. This is a common problem, as the varnishes available until the mid-twentieth century were all based on natural resins, and these unfortunately discolour when exposed to light. Once that has happened, effectively the painting is then being viewed through a yellow filter which changes the appearance of the colours and tones chosen by the artist. A discoloured varnish also alters the sense of depth in a painting, making the scene seem quite shallow and flat – exactly what a seascape like this, with its misty horizon and distant, ghostly ship, was not meant to be.

It was therefore decided that the varnish should be removed. I made several tests in different areas of the painting, as I had to be sure that the materials chosen would not affect the original paint. In small sections, I then removed the varnish. This was potentially particularly tricky around the rigging of the boats and the thinly painted ship in the background, as these were likely to be less robust, so here the cleaning was done under a microscope, using a very carefully-handled scalpel.

Conserving this painting was a very meticulous task, but we think that the photo above – from halfway through cleaning – shows that it’s worth it!

The Old Masters gallery will reopen on 21 May 2016, with a very special temporary loan from the National Gallery, London to celebrate: Rembrandt’s Self Portrait at the Age of 63 will come to Bristol as part of the National Gallery’s Masterpiece Tour 2016.

Your donation will help us conserve more works of art and bring them back on display in our newly transformed galleries. Follow the button to donate and find out more about how you can support us. 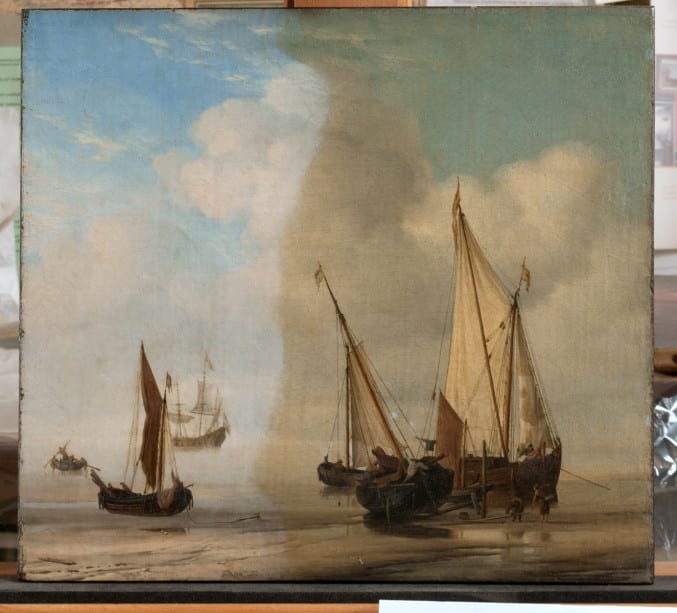