by Lee Hutchinson, curator of history

Bristol has been the scene of numerous climate protests in recent years. They have become a part of the ongoing Bristol story. Two groups, in particular – Extinction Rebellion (XR) and Youth Strike 4 Climate (YS4C) have dominated the news. 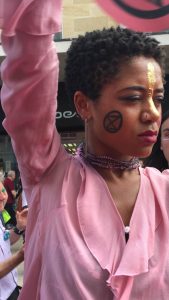 Extinction Rebellion was formally launched in November 2018. It described itself as “an international movement that uses non-violent civil disobedience in an attempt to halt mass extinction and minimise the risk of social collapse.”

From the outset, it had a strong Bristol connection. The XR Bristol group is one the biggest outside London. Up to 500 people attend weekly meetings in three areas of the city. It is also one of the most highly organised, with around 15 working groups, from arts to actions, and finance to regenerative culture. The distinctive Red Rebels originate from Bristol, having emerged from the Invisible Circus, the popular street-performing collective.

In April 2019, XR Bristol, along with Wales, put the iconic pink boat in Oxford Circus. They held the space for five days and nights. In June, there were city-wide protests against the excesses of the fashion industry (‘XR52’) and an anti-airport-expansion protest on the Downs. In July, there was a week-long protest in the city. XR Bristol placed a pink boat on Bristol Bridge, a pink car on College Green, and, briefly, a pink bathtub at the bottom of the M32.

In October, in London, XR Bristol and others occupied Marsham Street, camped around a lorry outside the Home Office. In February 2020, they joined the campaign to stop Bristol Airport expansion. Following a final weekend of protest in Weston-super-Mare (which featured, among other things, a 12-foot ostrich with its head in the sand) North Somerset Council voted against the expansion. 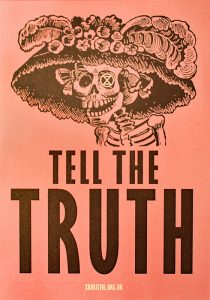 XR Bristol is currently focussed on clean air initiatives and raising public support for the Climate and Ecological Emergency Bill.

On 25 June this year, six activists climbed onto the roof of City Hall. This was followed by a public statement from the Mayor on the timeline to deliver clean air proposals. The end date has been brought forward by two years, to 2023.

XR Bristol has been one of the most politically successful XR groups in the UK.

In principle, its three demands have largely been met: ‘Tell the Truth’ (Bristol was the first council in the country to declare a climate emergency); ‘Act Now’ (Bristol has a One City Plan with a pathway to net zero by 2030); ‘Beyond Politics’ (the council voted to hold a Citizens Assembly after the relaxation of Covid-19 restrictions to give people a voice in climate and community affairs). 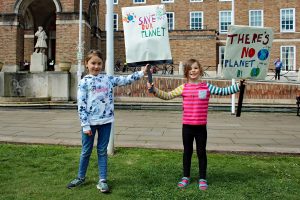 Like XR, the Bristol branch is one of the biggest in the UK. The group organises climate strikes in the city centre and campaigns for climate justice.

BYS4C’s first strike took place on 15 February 2019, when over 1,000 students assembled on College Green. Further strikes were held in March and April and the group continued to expand.

In May through to July, efforts were focussed on the campaign to stop Bristol Airport expansion. 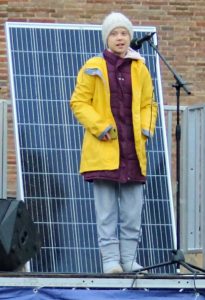 On 20 September, BYS4C took part in their seventh strike – part of the Global Climate Strike – the largest ever mobilisation against climate change. Globally, over six million people took part. Of those, some 15,000 gathered in Bristol and marched through the city centre.

Later, in November, BYS4C hosted a climate hustings. This gave Bristol youth the opportunity to engage with local MPs. They urged them to overcome climate scepticism and inaction.

BYS4C’s successful stand against the proposed airport expansion – and their tireless campaigning for national initiatives, such as a Green New Deal – led to Bristol being chosen as the first UK strike location to be attended by Greta Thunberg. On 28 February 2020, an estimated 30,000 people came to hear her speak.

So why should Bristol’s museums, and M Shed in particular, collect from the climate movement? 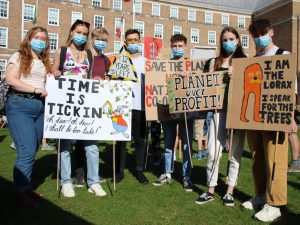 M Shed was designed to tell the story of Bristol, past and present. It was intended to provoke healthy debate about the stories and issues that matter to local people. It serves as a safe, physical space for individuals and communities to hear those stories and have those debates. This is why it continues to represent and raise awareness of local groups, including those in the climate movement.

At present, a new display is in development with a climate-protest theme. A new project, Think Global, Act Bristol is set to launch in 2022. It will draw on objects and archives from Bristol’s past and collect from the present to share knowledge and help build community across the city.

Donations to the museum service include climate-protest banners, placards, posters and leaflets. Eco fashion designer Linda Thomas gifted some XR-branded jewellery pieces. These were worn by a Bristol activist at the first XR ‘Rebellion Day’ in London on 17 November 2018. Dr Thomas has subsequently been interviewed for her recollections of her involvement with climate action. Both the recording and transcript are available on our online catalogue. 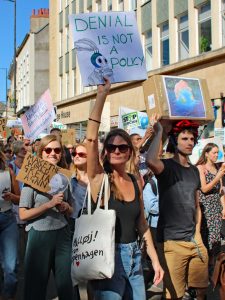 One of the activists at the head of the Global Climate Strike on 20 September 2019 – Melanie Ruth – donated the upcycled ‘climate-emergency dress’ that she wore on the day. She has recently been interviewing Bristol schoolchildren on the theme of climate change, collecting artwork and stories that will make a valuable addition to the social-history archive.

Photos, leaflets, and a handful of very wet, mud-besmirched placards were collected during the demonstration led by Greta Thunberg. A member of the public has since donated a full-length video of Greta’s speech, which will be made available online.

An effort has been made to collect both oral and written testimonies. One young climate activist, Persephone Hubbard, who donated her placard while visiting M Shed, wrote:

“If we don’t act now, we’ll have to swim later because our land will be flooded… I hope, by the year 2031, when I am 19, global warming will be under control… I want the politicians to realise that this crisis is far more important than Brexit… they’re stupid if they continue to do nothing to stop climate change.”

A big question for decision makers in museums, and one that urgently needs to be addressed, is whether or not they will prioritise collecting that not only represents the climate movement but supports and provokes action.

As activists and climate scientists keep telling us: time is running out – every city must act like this is an emergency.

2 comments on “Collecting to represent the Climate Movement” 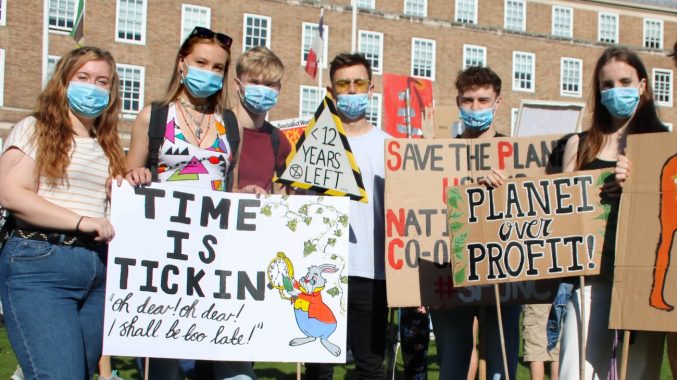