On Friday 8 May, we mark the 75th anniversary of VE Day – the end of the Second World War in Europe.

On Tuesday 8 May 1945, celebrations took place across the country and Bristol was no exception. Two different audio-visual archives from Bristol Archives and Bristol Libraries help us to understand how this moment might have felt.

Bristol Archives holds many different types of document ranging from the official to the personal.

These can help us see what life was like for Bristolians at the moment peace was declared. The records of organisations, such as Bristol City Council or the Church of England, provide information about organised events in the city. People’s diaries and photographs show how individuals and communities marked the occasion. Audio-visual collections are perhaps the best way to see the sights on that day and hear the voices of those who were present. Two examples here show how useful these types of archives can be.

The first example is footage from Bristol Archives’ film collections. It is taken from The Citizens of Bristol at War, a film made in three parts made between 1943 and 1946. This clip shows the Lord Mayor and other city dignitaries progressing across the city centre in a carriage.

At each stop the mayor addresses huge crowds. We see hundreds of smiling faces, as people gather on Corn Street, on the Centre and on College Green, to hear him. Flags are waved and people hug one another and dance.

What is striking to us, besides the very obvious jubilation, is the devastation of the city after years of war. We can see the sooty stonework and broken windows of shops as well as the towering ruins of bomb-damaged premises in the background. One particularly ruinous building provides a viewing platform for some brave onlookers.

In these interviews recorded in 1988, members of Brislington Conservation Society talk about their experiences of the Second World War. These recordings were made in preparation for A Town in the West Country, a play produced by Bristol Old Vic.

The recordings provide an individual insight on the scenes in the VE Day film. One speaker describes dancing with friends in the centre – she may have been one of the faces in the crowd in our film. Another speaker remembers parties and bonfires in Brislington, reminding us that local celebrations were just as popular as those in the city centre.

Bristol Libraries, A Town in the West Country, ref TWC17 (Tape B)

“We may allow ourselves a brief period of rejoicing, but let us not forget for a moment the toil and efforts that lie ahead.”

The film shows very clearly just how much rebuilding would be required to restore the city. When we use archive sources we have knowledge of the decades of change Bristol would undergo after the war.

These clips let us see and hear people standing on the edge of an uncertain future. They enjoy the moment of elation and relief before beginning the long process of physical and social reconstruction. 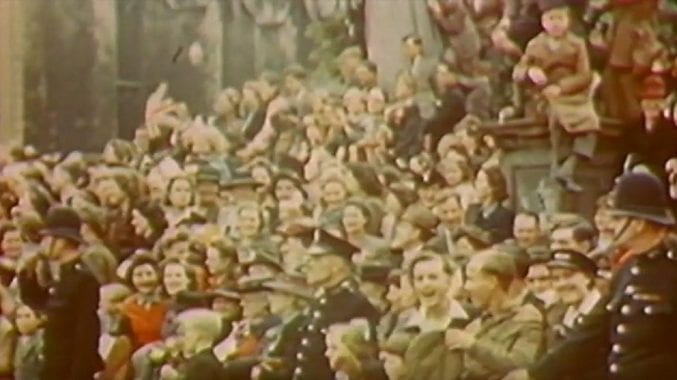