As an organisation best known for presenting the contemporary arts, Arnolfini is maybe not immediately associated with the idea of archives and heritage.

But it was founded almost 60 years ago, by a trio of young creatives in a small space above a bookshop on the Clifton Triangle. It eventually found a home in Bush House on Narrow Quay in 1975 –  a move which kicked off a process of regeneration which transformed the derelict docks into the busy tourist hub we see today.

Since then, Arnolfini has presented the work of thousands of the world’s most important living artists – often at an early stage in their career – to many millions of people, here in Bristol.

It has also amassed a large collection of material which documents this activity, one of the largest individual collections housed at Bristol Archives in fact.

I’ve been working with this collection on and off for about eight years. Many times, in the first few years, I’d think we were working on an impossible task, when faced with the sheer scale of it.

One of my first jobs was sifting out thousands of 35mm slides from the plastic wallets they’d be filed away in – the plastic was slowly degrading and damaging the surface of the slides. These are the only photographic record of our past exhibitions and as such an invaluable resource for artists and researchers.

It felt like an endless task at times, peering at the slides on a light box to identify them. But eventually they all ended up labelled, stored away safely, and available for anyone to view. The amount of time I was able to spend at the archive was limited, but along with a fantastic group of volunteers, we got approximately 7,000 items repackaged and catalogued. These range from all of Arnolfini’s publicity material (brochures, posters, magazines) to the minutes of our governing Council of Management.

However, this process was given an amazing boost last summer, when I was awarded a grant by the Heritage Lottery Fund to undertake a project which will make much more of Arnolfini’s archive into a properly accessible public resource for many years to come.

The project has a two-pronged approach. On the one hand, it is enabling us to work though many practical jobs which we would not otherwise have the resources to manage. This includes digitising unique videos of incredible performances, talks and workshops before they get so degraded as to be un-view able.

It also allows me more time to catalogue important remaining sections of our collection – for example, the Curatorial Files which document all the ‘behind the scenes’ planning of our exhibitions, including fascinating correspondence between artists and curators.

Crucially though, besides the practicalities, the project is also an opportunity for us to encourage more people and a wider range of people to engage with our archive and the heritage it represents.

I receive lots of questions about Arnolfini’s history from all over the world, but these are generally from arts specialists. I believe, however, that Arnolfini’s heritage is something that many more people should know about so they can get a better understanding of Bristol’s cultural history more broadly, and the ongoing legacies within this. Through this project, we’ve focussing on working with young people. We’re working with local schools, sharing aspects of Arnolfini’s history as something for pupils to draw on as they imagine their futures, as creative, critical citizens. And we are also working with a collective of local artists in the early stages of their careers – the Archive Group –  opening up the archive to them as a resource through which to pursue their own creative and professional development.

It’s been an amazing process thus far. We’re introducing young artists to people who worked at Arnolfini 30 years ago, each side wide-eyed with curiosity about how the other manage the highs and lows of pursuing a creative career. We’ve been working out the best materials from Arnolfini’s archive for school pupils to use to create wearable costumes.

Most rewarding for me, we’ve had the next generation of arts professionals getting really excited about artworks and projects they’ve found referenced in the archive which I barely knew existed myself.

We’re roughly half way through the project now – I’m so curious to find out what happens next!

To find out about the Arnolfini material that’s been catalogued so far, visit Bristol Archives’ online catalogue. 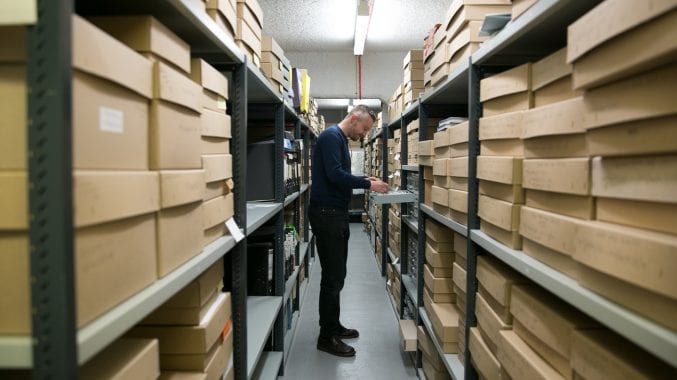