Ludwig Koch’s Memoirs of a Birdman describe how he made the first ever audio recordings of birdsong. When he was eight, Koch was given a phonograph by his father and began making wax cylinder recordings. Among the birds he kept was a White-crowned Shama, an Indian passerine. In 1889, he recorded this bird, creating the original tweet of the day.

Born in Frankfurt, he led an incredible life, mixed with royalty and great musicians. He fled to Britain during World War Two, to escape the Nazi regime. He soon began broadcasting on the BBC, becoming something of a fixture on the radio over the next two decades.

His recordings became the foundation of the corporation’s library of wildlife sounds and his Songs of Wild Birds volumes are the first commercial birdsong recordings. A programme about him is available on BBC Sounds.

At some point in the 1940’s, a Bristol woman called Pamela Fursman heard him on the radio. This was most probably on The Naturalist programme (a series that led to the formation of the BBC Natural History Unit in Bristol). This inspired her to start making her own recordings.

The ‘Unlocking Our Sound Heritage’ project, based at Bristol Archives were given a large collection of Pamela Fursman’s recordings on cassette tape. They mostly consisted of various radio programmes, but also included her natural history recordings. These had been transferred from open reel to cassette.

Amongst hundreds of cassettes that she recorded, one tape must have represented something important to her; a carefully compiled selection of birdsong, to which she added descriptions of the context of each recording. The source materials were field recordings made in Somerset, Wiltshire, Gloucestershire and the Brecons, as well as the garden of her home in Glenfrome Road.

The result was a kind of birdsong mix tape, which includes several species that are now hard to hear such as Cuckoo, Turtle Dove and Nightingale. In her introductions, she describes hearing Ludwig Koch’s recordings on the radio and how this had been her inspiration; ‘I’ve got a lot to thank Ludwig Koch for, he taught me to love the bird songs and he taught me how to record them’.

Feeling a bit like the detectorist who finds gold on his first field trip, the second day I spent as a volunteer in the sound archive saw me come across Pam’s recording of a Nightjar. It was made on August 1 1963, at Longleat in Wiltshire.

Gold for me, as this is a species I have been researching and recording for 20 years. Listen to Pam’s big fat recording, a bit noisy from its transfer to cassette, but showing unmistakable fieldcraft in its proximity to the bird. An archetypal Nightjar song.

Like a pressed flower that connects back to a distant summer, the sound linked me momentarily back to Pam in 1963 and to the original Birdman, in the century before last.

Unlocking Our Sound Heritage is a National Lottery Heritage Fund supported national project led by the British Library. Find out more about the project

Image of Nightjar by Ben Locke.

One comment on Unlocking Our Sound Heritage: Serendipitous finds in the Pamela Fursman archive 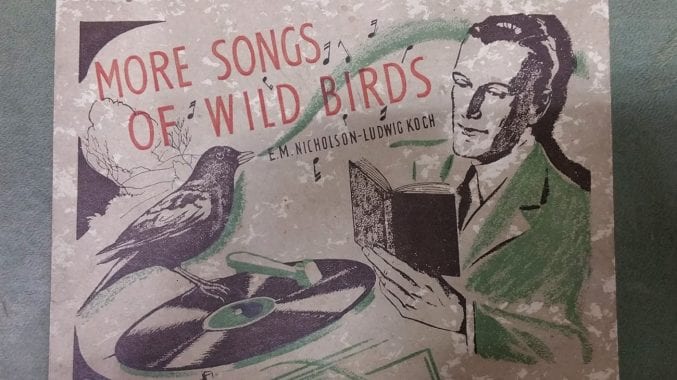