As you may have read last summer, Bristol Old Vic is undergoing a major redevelopment. As part of this, archives of the theatre are being catalogued and conserved, thanks to a grant from the Heritage Lottery Fund.

These archives are held at Bristol Archives and the University of Bristol’s Theatre Collection. They include several different collections which together tell the story of this nationally important theatre.

The Theatre Royal material at Bristol Archives is the first of these collections to be catalogued and repackaged. It concerns the first 200 years or so of the theatre’s history, from its foundation in 1764, up to the mid-20th century when the Bristol Old Vic Company was born. From the 1940s onwards, hundreds of these documents and items were deposited at Bristol Archives by the owners of the theatre building, the Trustees of the Theatre Royal. We have now catalogued these together for the first time in one catalogue with improved item descriptions, making it easier to search through the collection.

Bringing the archives together shows more clearly the relationships between separate sets of documents, which in turn enhanced our understanding of the theatre’s history and the people associated with it.

Documents such as the proprietors’ minute books show us the preoccupations of the people who owned the theatre, repaired and redecorated it, and ran it over the course of two centuries. Seating plans provide a glimpse at the day-to-day management of the theatre in the 18th century. Prompt books and playbills give a rich and lively description of the variety of performances on the Theatre Royal’s stage in the nineteenth century. The series of playbills, almost 2,000 items, will be added to the online catalogue in the coming months.

The slightly haphazard history of the theatre – its great successes and periods of decline – can be seen in hundreds of legal documents. The series of licences and leases issued to the theatre managers reflect periods of relative stability or financially precarious times: the records show managers happily renewing their leases for years on end, or repeatedly found behind on rent payments. What is particularly striking from the documents is that the theatre building remains at all. That the theatre endured city-wide crises such as riots and bombing is notable. However, descriptions of the general dereliction of the premises in the early 20th century, in minutes, insurance and financial documents, are particularly alarming. The committee minutes list complaints against patrons smoking in the auditorium, whilst photographs taken in the 1940s show gas lighting still in use, so the survival of the wooden auditorium is astonishing.

It is also impressive that such a complete written record of the theatre’s history has survived. This material is a complement to archive collections at the Theatre Collection, concerning the Bristol Old Vic Theatre company (1946 to the present day) as well as records of individuals and organisations associated with the theatre.

Cataloguing and conservation of these archives is only a part of the HLF project. Many of the documents are also being digitised and will be used in new interpretation and exhibition spaces at the Bristol Old Vic. Expect to see some of these archival gems at the theatre by the end of this year.

And of course, if you would like to look at the Theatre Royal archives before then, you are welcome to view them in the Bristol Archives searchroom. 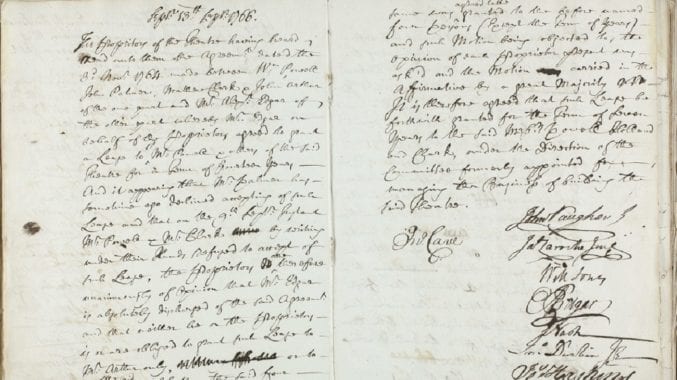