What is the Uncomfortable Truths project?

A group of 14 University of the West of England students and alumni collaborated with the museum to create the Uncomfortable Truths project. They were introduced to a selection of museum objects and asked to create podcasts and object labels. They brought their own experiences and observations to address the dark colonial pasts behind these objects – revealing the uncomfortable truth. After months of hard work, on the evening of 12 November, the museum hosted an event to officially launch the podcasts, which I had the opportunity to attend.

What happened at the Uncomfortable Truths Launch?

It was a great turnout and it was encouraging to see a variety of people of different ages and backgrounds. The night began by introducing the team behind the podcasts who helped to make the project possible. We then heard extracts of each of the podcasts. After that we had the opportunity to hear two beautiful poems about the Benin Bronze, one of the objects chosen for the podcasts, giving us a desperately bleak perspective from the sculpture itself and the people it was taken from. The group then had a Q&A chaired by Dr Foluke Adebisi, senior lecturer at the University of Bristol. They discussed the issues of unrepresented stories in museums and what ‘decolonising’ means to them. They discussed whether the project had impacted their sense of identity and some incredibly interesting perspectives were shared. As a member of the audience, we were given an insight into the responsibility they felt by participating in such a complex project.

They explained that as people of colour, working on a project that required them to delve into the dark colonial histories behind these objects had a toll on them emotionally. However, one member of the group declared that the project had a positive impact on them, leaving them feeling “more British” and celebrated this sense of identity with us. We were then invited to walk around the museum and find the objects from the project and listen to the podcasts on our devices. It was a good chance to talk to the participants and learn about their thoughts and interpretations of the objects. It was clear that they were an exceptionally intelligent and articulate group of people which was really inspiring.

When I attended the launch, it was my sixth day of working in the museum. It definitely feels like I’ve started my role at an interesting time, not only for the museum but for Bristol as well. As a woman of colour, I’m passionate about representation and inclusivity throughout organisations, so it was great to get involved in a project that shared these aims.

The museum has come together as an organisation to have ‘decolonisation’ meetings, one of which was in collaboration with the Black South West Network. The aims of these meetings are to bring about drastic change, not only with the objects and how they are represented but also to diversify the workforce, so it truly reflects the population of Bristol.

New labels for the objects on the podcasts are being installed next week, giving us more detail behind the history of the objects. It would be great to see a continuation of the podcasts and object labels revealing the uncomfortable truth behind them. It has already been established that this will not be a one-off or token project that has no impact.

The Uncomfortable Truths project needs to be treated as a catalyst for the museum to identify some deep-rooted issues. It will be a long process, but I hope that the museum eventually makes a radical transformation from being a memento of colonialism to a cultural institution that is representative of all people in Bristol.

Listen to the Uncomfortable Truths podcasts.

Check out the other Uncomfortable Truths blogs:

All images by Cidella Brown. Video by Manoel Bolutife Akure. 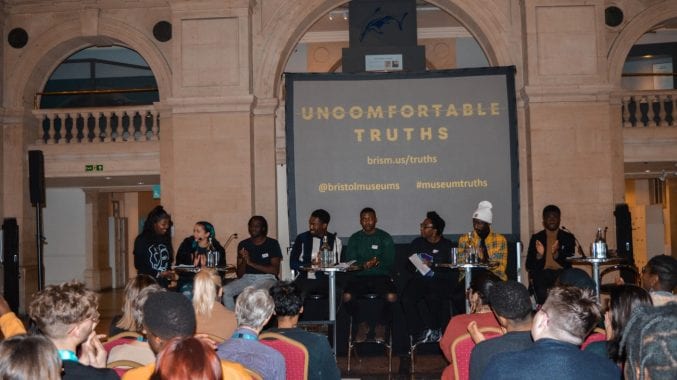