The Uncomfortable Truths project seeks to uncover the truth behind certain objects on display in Bristol Museum & Art Gallery – how they were collected, what they represent and the difficult pasts that are hidden behind them.

How did you feel about being asked to work on this project?

Can this be used as a teachable moment to the wider community? was the initial question that sprung to my mind. The title of the project, ‘Uncomfortable Truths’, screamed accountability, fear and, perhaps, a slight chance of reparation. I didn’t question whether I had the capability to coordinate the project. Instead I began to question what direction we could take this conversation and what this would mean for Bristol’s future.

During my university years, I spent a lot of time researching Bristol’s contributions to the slave trade so I was very keen to use this project as a teachable moment.

How did you recruit the students?

The first task was to find contributors to create podcasts for the project.

I have had the pleasure of meeting incredibly talented young people, firstly, through my degree as a graphic design student at UWE and later as a freelance designer. I’ve worked with UWE Bristol Equity, Africa Week, Babbasa, University of Bristol and Rising Arts Agency. I have curated events with some of them and worked as a collective.

The main goal was to not limit contributors to only creative students. Many voices within Bristol may not have the creative experience but have the desire and passion for the subject, and the interest in working collaboratively. Contributors to this project were students and alumni, from academic and creative disciplines.

What was it like coming to work in a museum?

Many of the group had set foot into the museum spaces before as visitors, like myself, but the prospect of working within this space didn’t feel as accessible.

Being young people of colour, institutional racism and a lack of representation have been huge obstacles to feeling a sense of belonging in spaces like a museum. When everyone arrived for their first meeting and could see faces they recognised as well as new faces, it gave a sense of community and a safe space.

In my opinion, this is what allowed conversations to thrive especially when it comes to understanding young people and their work within institutions.

How did the sessions work? The podcast teams had great support from the museum curators who took them on tours and had weekly contact with them. The groups created their own pieces with ongoing support and training from staff and resources at UWE, Bristol Museum & Art Gallery and Ujima radio station.

What are your thoughts about working on a project that seeks to be more inclusive?

The experience of working at the museum as a project coordinator has been very new to me. My usual role is as designer/curator so this project has given me the opportunity to gain new skills and work within leadership.

Throughout the project we have had a say, each step of the way, with constructive feedback. This project has always been about revealing the truth and not muting voices. This has happened too much in history. Our group members have also engaged with the wider community at various community events. The Uncomfortable Truths project was brought up on numerous occasions as the students shared their involvement in the project. Many questions were asked, such as, what happens after we reveal the truth?

This conversation continues at the museum. We have also discovered that some objects have already been sent back to their country of origin, which we did not know before.

The project has been challenging but it has also been rewarding. We have tackled questions regarding ownership, accountability and revealed truths that have been concealed from audiences. It sends a message that the museum wants to be more inclusive and transparent – which is especially important in its role of informing us about history.

We still have a long way to go but it is a first step of many to incite positive change.

What has been the impact on the students taking part?

The most enjoyable part of this process has been watching the growth of the team from the start through to the editing process. I was especially impressed by the dedication to the research and the culture that has been shown. This meant tapping into a very different discipline for them. To see young people in Bristol paving a legacy, is amazing.

The biggest challenge is figuring out what happens next. Being part of a project like this is great, but this conversation and this history is much bigger than us. However, little drops of water make a mighty ocean.

And when the project launches, what am I looking forward to the most? Revealing the truth.

Update, November 2019 – you can now listen to the Uncomfortable Truths podcasts.

All images by Cidella Brown. 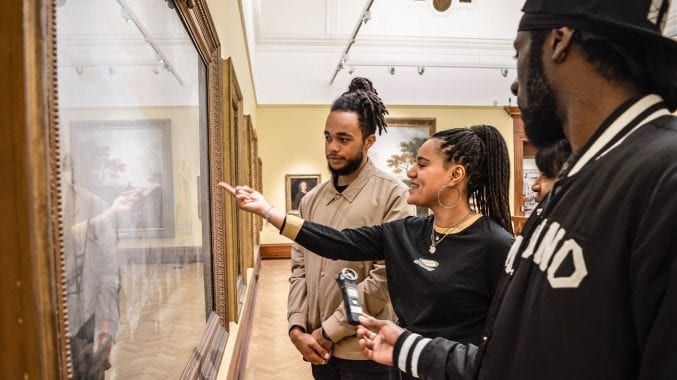