The museums remain closed while we work to ensure that they are safe for visitors, volunteers and staff. M Shed cafe is open Thu-Sun, 12pm-9pm. The rest of M Shed remains closed. We will share opening dates as soon as we can. Thank you for your patience.

by Anika, Marcin and Maisie – the Young Exhibition Producers

We are the team working with Bristol Museum & Art Gallery to produce an additional exhibition to complement Leonardo da Vinci: A Life in Drawing.

As part of our research, we were given the opportunity to explore Windsor Castle and meet with Martin Clayton, Head of Prints and Drawings at Royal Collection Trust to see the works for real and have a little chat.

The day was split into seeing two different sides of history. The castle gave us an insight into the life of royalty, full of gold, kitsch, power and maybe a little bit too much splendour. It was both overwhelming but also very intriguing to see all the collected relics that the Royal family own. All kinds of weapons hanging on the walls, guns displayed like mandalas. It showed us a whole different world, very far from our own.

It was quite difficult to really engage with what was on display as there was not a lot of context or history shared with us. (Although we may have missed out on something because everyone else was walking around listening to these devices that looked like brick phones, whoopsie!)

Then we got to see the works of Leo!

We met up with Martin Clayton who showed us all 12 drawings that will be exhibited in Bristol. We learned something new about Leonardo through each drawing from Martin. The drawings themselves are from a giant sketchbook that Leonardo used to make his studies and sketches. It was an impressive book but most of the drawings have been taken out by the conservators so they could be mounted and kept safe.

Through Leonardo’s works we see that he had many interests from nature to mechanical drawings of the human anatomy and engineering. He explores extreme beauty and the extreme ugly.

It seems like he was quite a sporadic thinker and there are many things he never completed. Martin brought up this idea that Leonardo might have felt like a failure but I think this is why it makes it easier for us to connect to him than the relics of the Royal family. Leonardo was given a commission to make an equestrian monument, this was his third commission but none of them were ever actually made. We also don’t know much about whether he himself could sculpt or not.

The designs for boats show that he attempted to work out an efficient system to turn a paddle wheel but he did not actually understand that larger forces are needed to turn a bigger wheel. He struggled with maths all his life!

There is also a sneaky illustration of an unknown man, on the back of the boat designs, which we didn’t know about before. He used something like a compass to make the circles and you can still see the prick marks 500 years on!

Martin had so much to say about the drawings which has been so helpful for us. We can now take that knowledge and really think about the choices we need to make for our exhibition in regards to the objects and themes.

We also managed to fit in a quick tour of the conservation lab which was very clinical and literally like a doctors surgery for artwork! They’re fixed up with magical techniques and there were some beautiful Indian artworks getting some TLC.

More blogs on this project: 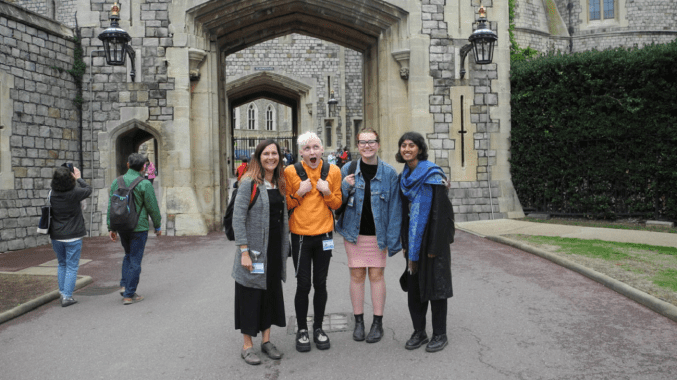