by Anika, Marcin and Maisie – the Young Exhibition Producers

We are the team working with Bristol Museum & Art Gallery to produce an additional exhibition to complement Leonardo da Vinci: A Life in Drawing.

This stage of an exhibition is often done after working on a concept idea because it can allow you to fit your objects/artworks to the theme you’re working with.

We started this stage before deciding on our concept because of time constraints for object conservation and the fact that we already had a subject to work with – the anniversary of Leonardo da Vinci and his drawings.

There are thousands of different objects to discover in the museum collection. Exploring them is the most exciting thing as you don’t know what you will find and there are so many different stories.

But it also means you could be endlessly looking so we worked with a long-list of objects and artworks that were pre-selected by the curators and fitting to the themes of the drawings by Leonardo Da Vinci. Note to self: take photos of all potential objects to remember them!

The museum stores are absolutely filled and there are so many different stores. We explored world cultures, Eastern art, geology, natural history, art, contemporary art and collections from other museums too like M Shed and Blaise Castle House Museum.

We realised it was important to keep an open mind, to ask about the stories behind the objects, take notes and explore some of our own ideas which led us to find things that no one else had thought about.

We got heavily distracted in M Shed as so many of the objects are so big that they are on open display in the stores. This meant we could ponder and ask questions about objects that weren’t on the long list.

Talk to curators – they know their stuff and you will learn interesting stories about the objects.

The first stages of the project involved deep exploration of museum objects, hidden inside the stores and pre-selected by curators. Altogether we spent over 24 hours in basements and odd rooms and I came to really like their microclimate and claustrophobic narrowness with their weird smells of oldness and chemicals to prevent decay. In the World Cultures store we saw artefacts from ancient and modern civilisations of Nimrud, Egypt, Mexico and Europe. Many of the objects were of mythological or sacred characters such as Egyptian Bastet figures (cat-headed, ferocious protection goddess), mummified cats or Mexican limb-shaped charms offered to deities in fulfilment of a vow.

The Industrial store contained some of the most striking artefacts. Alongside meticulous ship models, cosmic ray detectors and flood level markers there was a XIX C. Post Mortem tools set, autopsy table and John Horwood book – a dissection report bound in his own skin.

The British Archaeology store spans all periods of human history and we saw examples of Prehistoric flint tools, Roman God figurines and ancient tombstones and keystones with grotesque figures.

And finally in the Natural and Social History stores we saw some severed silicone limbs crafted with great attention to detail for the BBC drama, Casualty.

More blogs on this project: 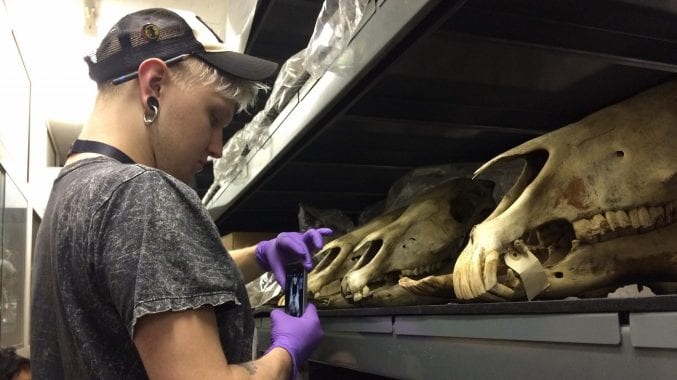