Back in 1980, the museum acquired a ship’s figurehead from the Bristol Shiplovers’ Society.

They’d been offered it by Mr Croft, who had it in his parents’ garden in Essex. He told them he’d bought it from a dealer in Bristol in 1940, and that the dealer had spun a yarn about the figurehead coming from a ship that had been wrecked in the River Avon and then being displayed at a pub that had been shut as a bawdy house in the late 1930s.

At the time we couldn’t discover any more about it, but in the last year or so we’ve been able to piece together more of the story, partly because of digital technology.

Although the River Avon is known for ships going aground, very few became so badly damaged that they had to be scrapped. One of these was the Importer, a sailing ship bringing timber into the port. She was quite elderly, having been built in New Brunswick in 1853. As she travelled up the river towards Bristol in November 1885, she went aground at Round Point and stuck fast. On the following tide, six tugs struggled to get her free, as she had taken on lots of water, but they managed to get her as far as the lock entrance, listing heavily. Inspections over the next low tide showed she was damaged beyond repair, so she was dragged into the old Brunel lock and dismantled. The ship’s fittings, sails, ropes and other fittings were offered for auction in December, and it’s probably at this sale that the figurehead was bought. The bare hull was taken away to be broken up at Nore Point, Portishead, in January. The Importer aground outside Cumberland Basin, November 1885. You can see the figurehead at the front.

Two photographs of the stranding have survived, and by scanning these at very high resolution and comparing the figurehead with the image, we’ve been able to confirm this as the ship. Digital access to newspaper archives has allowed us to trace the story quickly. We still don’t know the name of the pub that it went to, however.

You can see the figurehead on display in the Bristol Places gallery at M Shed. 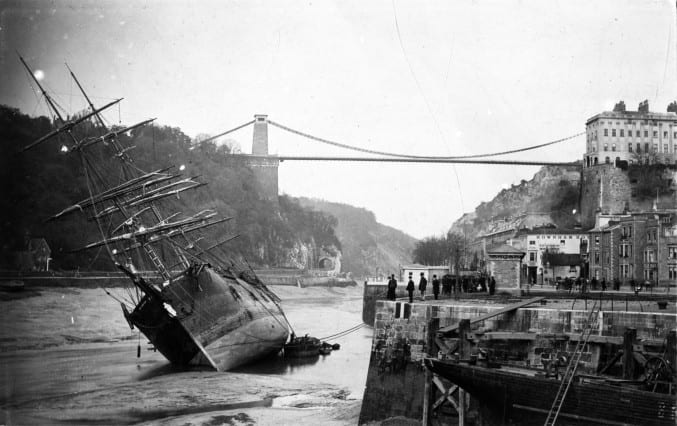