Last month Margaret wrote of her struggles with seasickness and the fun she was having with her new friends on board, particularly the Australian soldiers! She also saw African soil for the first time as the Balmoral Castle approached Sierra Leone. Here’s the next instalment…

Well this diary has been neglected of late, days have been so delightful and full of interest that writing of any description has been put almost quite in the background. We went ashore at Sierra Leone on the afternoon of February 15th and from that date onward I shall endeavour to record impressions of life on board. Eleanor, Nurse and myself have been very much together and have had our own little circle of boys on deck and have been so very happy.

We found the Native port very interesting and amusing, saw very few white people and the heat was intense. Children swarmed around us selling oranges, others offered their services as Guides and altogether they became rather tiresome. Some were really quite picturesque in their native garb of bright colourings, others were really dirty, but in the town there, all were at least clad. The shops and bazaars were interesting, some seemed a bit muddled up, but all notices were in English and everyone spoke and understood it. We got lots of oranges, I also bought postcards and a string of grass-seed beads.

That night was absolutely lovely. We went to the boat deck after dinner, Harry, Ben and Billy were there and had seats ready for us. The lights were on, our ship lay near the Cruiser “Marie” which was brilliantly lit up in colours and a dance was being held on board. The bay was crowded with liners, cruisers and smaller boats all lit up, and the lights of shore twinkled in the distance with the high hills beyond for a background. We had lots of fruit, then Harry brought us iced cider and we sat there under the stars and listened to a concert on the deck just below us where the men were reclining in all sorts of positions and enjoying themselves. “Lights Out” didn’t sound at 9.30 that night, we were up there until quite late and the impression of the whole weird tropical night with the scene looking down at the hundreds of Australian soldiers enjoying themselves as best they could, the lights and the stillness, remains with me still. A few days later Clarence Chick, a friend of Billy’s, came up to the Isolation hospital and was at once included in our own special crowd. Such a delightful boy! Very keen on photography, he taught me to colour photos too. From then onwards the days have been spent in lazy delight, we usually got on deck before breakfast and only left it for meals during the day.

Then came the last few days, one morning our guns were fired off as a test, they made a most awful row and some of our Shell-Shock cases were badly shaken, it seemed a shame, but it also gave us a slight idea of what the boys have to endure every day in the fighting line.

On Thursday morning Reg and Billy met Nurse (Gladys) and I on top before breakfast, and there, like clouds on the horizon were the Mountains round Table Bay. There was a strange feeling all round the crowds on deck that morning, we had lived so closely together for a month, and that day each must go his or her separate way and we were to scatter over a Continent. The scenery grew ever more distinct and beautiful and we viewed it all morning from different parts of the decks in a restless wandering way. We got into dock between 11 and 12 and had to go through a passport inspection on board, had a last luncheon in the saloon, all somewhat excited, and got ashore about two o’clock. Friday morning we had a lot of running about, were at inland revenue, Provost Marshall’s Office in House of Parliament, and then to the Emigration Office. All that settled up we met Gladys, Billy, Ben and Clarence in a nice Motor, and started off for the most delightful Motor ride I’ve ever had. Over 40 miles of delightful Mountain and Ocean scenery, right round Table Mountain, had a nice lunch at Beach Hotel Houts Bay, then started off again, the road was cut in the mountain side and wound at times round huge boulders and precipices, the ocean dashing its breakers far below, at other times through avenues of high pine or oak trees.

As we got down into the valley we stopped the car and Ben and Clarence, Eleanor and I climbed a little way through the bracken to get some silver leaves. Of course Clarence would climb in spite of a wounded foot and consequently his wound was very sore before night. We next stopped at the Cecil Rhodes Zoological garden and visited some of the animals there, then we passed through Wynberg and got back to inhabited parts again. Rounding a corner of the mountain side there lay before us the whole panorama of mountains, Cape Town, the huge docks and Table Bay, a lovely scene. The sky an intense blue and the sea like a mirror reflecting it, the liners, cruisers and smaller boats, the red, yellow and grey colourings of the town itself and the great slatecoloured flat topped Mountain towering above. All are impressed upon my memory with the many beautiful scenes this wonderful world holds. I want to see as many as possible.

It was a glorious day altogether and the last we spent with our Australian boys. Next day we went to the Customs and got our luggage relabelled for the “Cluny Castle” and as usual I found two more Scotties.

Saturday afternoon we motored down to the dear old “Balmoral” with a basket of fruit for the boys, she was coaling and looked very dusty, I’ll always love that boat and wonder if I shall ever travel on her again!

Next month Margaret embarks on the Cluny Castle for Nairobi. She enjoys sightseeing stops in Port Elizabeth and East London, and before long has made plenty of new friends!

Who were they? The Australian Soldiers

The National Archives of Australia have digitised the records of service personnel who fought in WW1, and they are available free of charge.

From these, and other sources, we have been able to track down some of Margaret’s friends:

Clarence Chick was a motor mechanic from South Australia. He received burns to his left foot and leg in France in March 1917, which refused to heal properly. After his return to Australia he became a well-known car designer, re-enlisted in WW2 and lived into his 80s.

Harry Clibbett was born in Crewkerne, Somerset, before emigrating to New South Wales. He was an agricultural student who joined the Veterinary Section and was promoted to Sergeant. He was discharged with heart trouble and vision problems, but despite this lived until 1967, married with two children.

Reg Grove was born in London before emigrating to Western Australia with his family, who owned a guest house. A clerk by profession, he was transferred to the Australian Army Medical Corps and served in France with the 10th Field Ambulance before being declared unfit. He returned on the Balmoral Castle as a member of the nursing staff.

Ben Jones was a dairyman from Victoria, who served in the Royal Field Artillery. He was evacuated from France after receiving a severe wound to the abdomen. His records state that he was returned to Australia suffering from “neurosis”, which would probably be described today as Post Traumatic Stress.

Billy Fowler was a labourer who had emigrated to Australia from Carmarthenshire, where his family still lived. He was wounded in France and returned to Australia after developing complications to a knee wound. He also lived until the 1960s after settling back in Australia and raising a family.

Did you know? The Cecil Rhodes Zoological Garden

The Cecil Rhodes Zoological Garden was established on his estate in 1897 to house animals which Rhodes had been given. After his death it was bequeathed to the state, and operated as Groote Schuur Zoo from 1931 until the 1980s. The abandoned and overgrown buildings of the former zoo can still be visited. 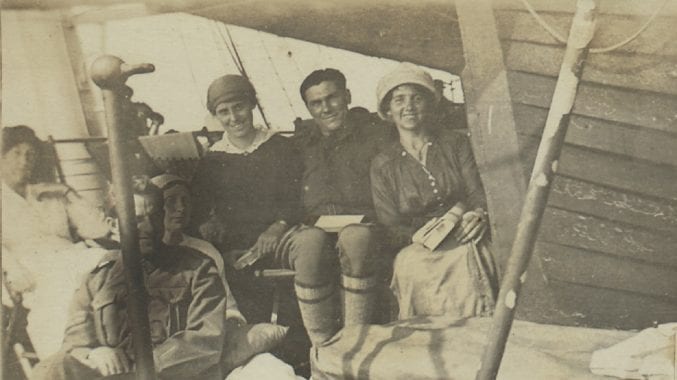