In February 1918 Margaret Duncan, a Post Office clerk from Scotland, sailed to East Africa for a new job and new adventures.

Her diary and photograph albums are now in the British Empire and Commonwealth Collection at Bristol Archives (ref: 2001/090/2).

One hundred years on, we share her story for the first time.

Last month Margaret set sail for Africa and got to know her fellow passengers:  a group of other Post Office clerks, a Red Cross nurse and a large number of returning Australian soldiers. Here’s the next instalment …

Why the blank of three days? Ah me! “Why left I ma home? Why did I cross the sea?” All the bilious attacks I had rolled into one! Yesterday morning I was so bad Miss Kemp washed and dressed me and helped me to the deck. The atmosphere of our cabin is awful, have spent my time stretched on a chair on the upper deck beside the crippled boys and the Sergts who reign up there. Nearly everyone has been sick, Miss Andrews and Miss Harpham very bad and aren’t better yet.

We are over 1000 miles from England now, and usually lead the convoy, this being a fast boat. On Monday afternoon, the Torpedo destroyers turned and left us, but we have still an armed Cruiser riding alongside, and altogether we seem well guarded.

It isn’t a case of being alone on the stormy deep, it seems quite friendly to see the others behind and beside us. But there was a dreadful swell on yesterday, and Tuesday too, some say this boat never was known to roll so much, something to do with the cargo it’s said, but maybe it’s having eight Post Office girls doing their maiden trip to BEA [British East Africa]! Our plates etc are set along the tables in the saloon inside wooden guards, otherwise we’d be chasing them across the tables at every meal.

Miss Kemp (Ellen or Eleanor) is very nice and we are becoming good friends, Miss Brammer (Fluffy) was also very good to me and twice brought me brandy when I was ill. Have been made a fuss of by all the boys on the upper deck and am known all over as “Scottie” now.

Of course we are all being asked again and again to go right on to “Ausie” as they fondly term Australia. I’ve never had a chance to know Australian boys before, and am only getting used to their talk, they are great fun. They have got a tiny harmonium up on deck today and a Sgt Major has kept us in fits of laughter with funny songs. I’ve also sung a few Scottish ones.

This has been a glorious day, quite summery, we are steering south now and are getting to warmer parts. The first day I’ve really enjoyed the motion of the boat, and the sunshine has been glorious on the blue ocean. But we are all sleeping every night in our clothes, haven’t undressed since leaving Plymouth.

The watertight doors are all closed down, we aren’t allowed to have baths, it’s too risky, and we must carry our life belts wherever we go. The soldiers have all been ordered to wear their life belts all day, so there’s something suspected, but we all confidently hope that we’ll get through safely and soon be out of the danger zone. This has been just a glorious summer day, have worn a summer hat – observe the date! The Convoy still rides on in safety over a deep blue sea, we have spent all day on the upper deck and had great fun.

Nurse is a great sport, she isn’t married as I imagined at first, she has been telling fortunes today, reading our hands. I had mine told by cards a few days ago by the man known as “The Padre”. The sum of it all is that I’m to be happy and to realise my ambition, but will never be wealthy. To be married 3 or 4 years hence – etc.

Last night we had music in the saloon, some of the Sergts, the girls and myself. There are some nice people on board, Miss McArthur ranks there, but there are some I’ve taken a violent dislike to, they’re not worth mentioning. We girls all enjoying ourselves, Ellen (or Eleanor) Kemp and I are good chums.

Have missed writing for a whole week. A week of lazy delight. Have thoroughly enjoyed every moment of it, we have a special corner of the deck and there the boys join us every day. Reg Grove, Ben Jones, Billy Fowler, The Padre and Sgt Harry Clibbett. They are all delightful companions and we have such jolly times. But we are very much under Military Rule, one evening the Sgt and I and a great many others had to take the lower prom deck, only Hospital patients and Warrant Officers being allowed above.

It makes the Sergeants boil to be sure, truth to tell there are so few unmarried girls on board that the Officers are jealous of them having a good time, and they are bringing out all sorts of horrid rules and restrictions regarding Sergts and passengers.

Sgt Clibbett is becoming quite a pal of mine, he’s a vet, has been badly broken up by the war, heart trouble and eye sight and is returning to “Ausie” for his discharge. We had a concert last night but it was in the saloon and we were nearly in a Turkish bath all the time! What a heat! The concert was very good, Sgt Major Cook DCM is the comedian on this boat.

This morning we dropped anchor about 6.30 and beheld land when we mounted to deck! All the convoy, and also other ships are anchored here, and we are viewing a tropical land now.

Freetown Sierra Leone lies before us, it looks lovely and most interesting. Behind the town the hills rise beautifully, with red, yellow and brown houses nestling on the slopes. It all looks quite fascinating, we are longing to be allowed to go ashore, but one of the Marconi Operators has just told us that we aren’t to go ashore today, possibly tomorrow.

Next month Margaret describes her first steps on African soil, with sightseeing stops in Sierra Leone and Cape Town before she bids farewell to her Australian friends and changes ships for the last leg of her voyage.

Who were they? Nurse Gladys

The Red Cross Museum and Archives have digitised their surviving index cards for WW1 personnel, which enabled us to find Nurse Gladys using details from the Balmoral Castle’s passenger list.

Sarah Gladys Cawood , who grew up in the Eastern Cape, spent 2 years nursing in the UK: firstly at the South African Hospital in Richmond, London, and then at Kineton Hospital in Warwickshire.

Did you know? British East Africa 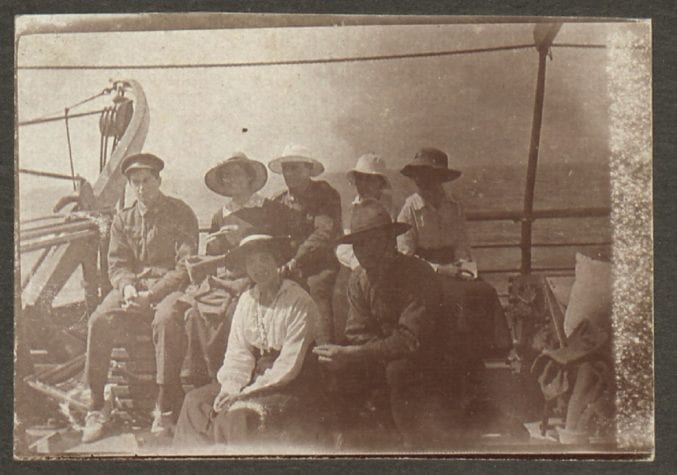