Last month’s instalment saw Margaret exploring Freetown and Cape Town with her new friends, before bidding farewell to the SS Balmoral Castle. Here she continues her journey up the coast of Africa towards Nairobi… We embarked on this boat about five o’clock on Sunday, Gladys came with us to the wharf. Oh the feeling as I was ushered into a six berth cabin and separated from Eleanor who got into a two berth. The boat is a tub in comparison to the Balmoral, the cabins open directly onto the dining saloon, there’s only one bathroom for all the ladies and worst of all, there are no nice Australian boys! We were immediately attacked with what might be termed “Balmoral Sickness” and she was away out at sea, heading for Australia.

On our return we spoke to some nice soldiers at the Dock gates where passports are examined, they wanted to know who was the Scottish girl who had been speaking to the other boy, one of them came from Dunfermline and another from Glasgow. These two were both on duty, but another boy, an English one, walked right down to our “home” with us, how pleased they were to speak to girls from home. We began to revive!

We have got to know two nice men on board, Mr Jessop a Telegraph Engineer from Nairobi and his friend, the latter has given us some strings of St Helena beads. This morning we cast anchor just outside Port Elizabeth and got ashore on a tender. What a delightful place! Just like a summer resort at home, only “more so”! Skies heavenly, sunshine brilliant, girls in dainty frocks and shops and buildings so clean and pretty.

We had ices in a nice lounge where there was music, bought a few bracelets and some fruit and returned again before lunch, as per instructions from those in command. There seemed to be fewer blacks than in Cape Town, but then this is a smaller place and not nearly so busy.

We saw a most glorious sunset last night, the sun dropped like a ball of fire down behind a bank of snowy clouds, flooding the west with an orange-red glow, then it appeared again between the clouds and the sea, and dropped down quickly into the great ocean.

Nearly a week on the Cluny and we are becoming quite attached to her now, this has been quite an interesting week after all. On Thursday evening we got to East London, right into the wharf, up the mouth of the Buffalo river. Now upon the scene must appear the two Marconi Operators aboard, especially “Sparks” in whom Eleanor and I had found an interesting mutual friend. He’s a bit struck in Eleanor’s direction, in fact I’m threatening that I’ll have to start a book entitled “The Conquests of Eleanor” and by all the rules of nature and temperament, she’s supposed to be the one who looks after me. So on Thursday evening we started forth, Eleanor and Sparks, the Junior Operator Potts and myself. My companion proved to be a very nice boy indeed and quite good sport. We walked up to the town, over a mile. The evening was beautifully bright and we were charmed with the place at once. It has been made to represent London as much as possible, the cars are quite like London ones and we strolled down Oxford Street past the “Strand Hotel” and entered the Waverly Cafe for iced drinks. The special drink we had was “Milk Shake” which is milk and ice cream, delicious! There were “Cluny” people all over the town of course in varied groups, we had a chat with the Purser and two Engineers in town and altogether the place was very jolly. I was home last night in my dreams and was telling Dad and Mother about my wanderings!

Today has been quiet, but we’ve had a nice chat with Mr Berrett. I don’t think I’ve previously mentioned him, but he is one of the most interesting men I’ve ever met. He is going to a plantation near Nairobi, has left his wife in England meantime. He spent years in west Africa, up on the mountain wilds, in the bush of Sierra Leone. Away on the mountains we saw from Freetown he has bored and found water, caused it to flow to the coast that steamers might be supplied. A huge Government contract he has completed there, alone among the blacks, able only to stand the climate for nine months of each year and therefore has had many journeys home. He can tell of the wonders of life in the bush, difficulties overcome against great odds, and hindrances caused by the superstitions of the Natives, etc etc and we sit fascinated for long stretches listening. He is Mr Jessop’s friend, the one who gave us St Helena beads, we have since had others from “Sparks.”

Next month Margaret describes an uplifting visit to relatives in Durban.

Who were they? Mr Berrett

Tom Burwood Berrett is another of Margaret’s companions whose ripping yarns we have been able to verify using records which are available online. He joined the Royal Navy aged 15 and served on ships including the HMS Alacrity. Later on, passenger lists show his several voyages between the UK and Sierra Leone, where he is described as a Waterworks Foreman. Mr Berrett settled on a plantation in Kenya which he called Alacrity, and died in 1945. According to the voter lists published in the Kenya Gazette, which lists married women alongside their husbands, he appears to have left his wife in England permanently!

Did you know? The Marconi Operators

The Marconi Wireless Telegraph & Signal Company was started in 1897 and built the first radiotelegraphy communication stations. These were used to communicate with ships at sea and exchange commercial telegram traffic with other countries using Morse code. In 1901the company opened its first training school in Essex, where operators were taught how to use short- and long-range sets. Many of them would have found employment on shipping lines. 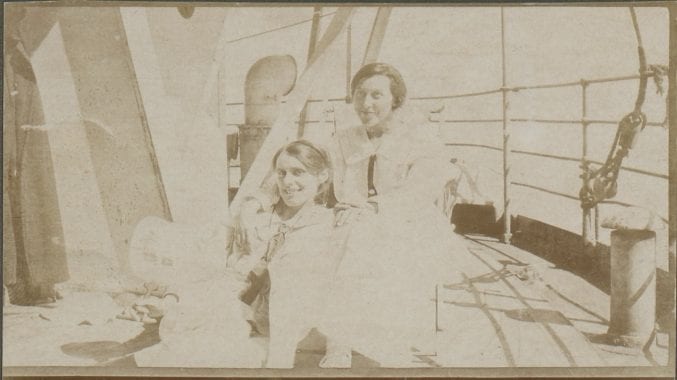