In February 1918 Margaret Duncan, a Post Office clerk from Scotland, sailed to East Africa for a new job and new adventures.

Her diary and photograph albums are now in the British Empire and Commonwealth Collection at Bristol Archives (ref: 2001/090/2).

One hundred years on, we share her story for the first time.

I start writing tonight after dinner, there is a rumour going around which says that we move off tonight to the unknown south; the next port must remain a secret. At present we are lying in Plymouth Sound, have moved a very short distance up today and there are boats of every description around us. Yesterday as we approached this liner, from the deck of the tender we beheld a weird apparition before us, painted in patches of pale green, yellow, black and dirty white (camouflage), no name visible. Drawing nearer there was, in large embossed letters underneath the paint, the name “Balmoral Castle.”
Very good, the “Africa” has been a phantom ship invented by the Government and we are quite pleased to see a good Union Castle boat before us after all.

I left the mainland and boarded the tender alone, but I didn’t mind, I knew all my baggage was safe, I had passed safely through the ordeal of the Passport examination, and all officials were most polite, then there was the amusement of watching the people crowd on. English crowds haven’t ceased to amuse me, they amused me greatly in London and they do now. A crowd of Scotties will stand about and watch and wait, but they don’t chatter incessantly of their private affairs so that neighbouring groups can hear. But the English talk even on and find conversation in the most inconvenient places and about the tiniest things.

We got aboard alright and I found my cabin. I have an upper berth, the other three girls are nice, but not specially so, they are too English for me I suppose, they’ve never seen Scotland – puir things. We have a great job finding room for our belongings, and have had many laughs already. The other four are across the corridor, so we are all eight Postal Clerks together.

This boat is partly transport and partly a Hospital Ship. There are hundreds (nearly 2000) of wounded and maimed and sick Australians on board, a hospital and Isolation Hospital, Orderly Room etc. Some say it is Commandeered by the Australian Government and they are controlling it. At any rate, there is an interesting crew.

I had a glorious time in London and have found a dear friend and Cousin in Winnie, and two new Uncles. Winnie and Uncle Peter waved me off at Paddington and now I’m absolutely on my own for the great adventure. Having very good food, no scarcity of butter nor sugar nor anything. The bread is pre-war in purity! Hope I’ll be able to enjoy meals after we really start! We have left the shores of Britain far behind now, started off about midday, I stood on the upper deck and watched the liners go past and form line and the Convoy formed up on either side. I believe we are seventh in a procession of ten big liners. Many a “Cheerio” and “Goodbyee” was called from the decks of different steamers as we left Plymouth Sound.

The boat sways a bit but I’m all right so far, Miss Andrews isn’t feeling very fit and is lying in her deck chair. I’ve got chummy with Miss Kemp the Cambridge girl and really like her very much, I’m glad she’s in our Cabin, we have tastes in common and are both determined to accept all discomforts as part of the great experience. It is comforting to see so many boats around us, there is no land, but there’s nothing lonely about this boat, and it in itself is really a fine one and very big.

I’ve made friends with some Anzacs (Australian and New Zealand Army Corps) minus legs or arms, one who has lost his right arm and has such a jolly face has asked me three times if I’ll go on the upper deck tonight, so I’ll go up for a little while. There is a concert going on now up at the Hospital Deck, we have heard “Lead Kindly Light” and now “God send thee back to me” is going to the accompaniment of a Mouth Organ. I believe there are over 1100 soldiers on board for Australia.

I’ve got to know a Red Cross Nurse who sits next to me at meals, she has been nursing in London and is returning to Africa to her home, I think she is married, must look at dinnertime and see if she wears a ring.

It’s been a strange Sunday indeed, no service, there wasn’t time after lifeboat drill and moving off this morning. The music above us has got to Ragtime now, the boys are all happy with their crutches, slings, stumps etc, they are going home to Australia and will have no more of the war.

Next month we will continue with Margaret’s account of her voyage, as she learns to deal with seasickness and forms closer friendships with her fellow Post Office clerks and the Australian soldiers.

Who were they?
Margaret Duncan was a 29 year old clerk/ telegraphist from the village of Balmullo in Fife.
She worked at the Post Office in St Andrews. The Outwards Passenger List for the Balmoral Castle, held at the National Archives, gives us the details of her fellow seven telegraphists.
They were recruited from all over the UK, all were single and aged between 27 and 36.

Did you know?
The camouflage Margaret describes was called ‘dazzle camouflage’. It was a geometric paint scheme introduced in 1917 to distort a ship’s appearance so that they were harder for the enemy to pinpoint with torpedoes. 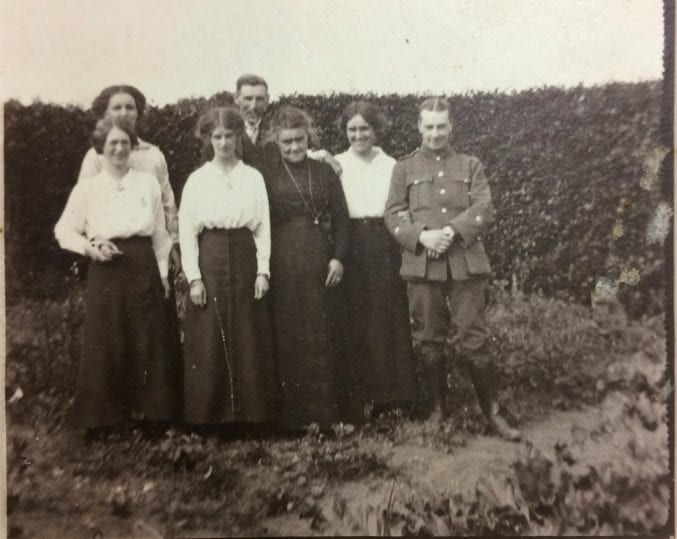