Last month Margaret embarked on the Cluny Castle and of course made many new friends as she travelled up the coast of South Africa. In this month’s instalment she describes a visit to family members in Durban. Her colonialist views on British settlers in Africa may seem outrageous by today’s standards, but were typical of many people’s attitudes in 1918. Is this Fairyland? Africa has fascinated me. Quite early yesterday morning we got into harbour, I got a letter on board saying the Cousin Marion awaited me with the car. Her husband, Mr Southward afterwards obtained permission to come on board, and after the necessary military permits were obtained, he took Eleanor and myself off to live in town. He has a lovely little car and both Cousins are delightful and so kind, we are quite enraptured with life in their lovely home. The view is glorious, we see all Durban and the bay. Mr Southward took us for a Motor spin yesterday and we circled the beach and bathing enclosures twice, they were very gay with brightly attired summery people, cafes, deck chairs and cool retreats.

Mr Southward has led a wonderful life and has been one of the Pioneers of civilisation in this great and wonderful Country. He can tell us of his work and adventures in the Central jungles, of roads built and transport carried out under seemingly impossible conditions, of fortunes lost and won. Through all these things he has gone, although crippled and lame from boyhood. Cousin Marion is dainty and sweet, and, having no family of their own, these two are mothering a boy who has been through the horrors of France and is now on the “Silver Badge” list, he lives here and goes to business in town. We like him muchly, this Reg Dawson.

I feel like writing to the men folks at home to tell them not to be content with the small possibilities over there after the war is over. There’s room to spare in Africa for all who have courage and pluck, and our boys have proved again and again that they’ve got huge reserves of both. The great thing is to adapt oneself to the conditions and go straight, then Africa becomes a goldmine of treasures to the man who has played the game. At sea again, well on our way to Dar es Salaam, our next port of call. Our holiday at Durban was absolutely lovely. On Tuesday we went shopping, had lunch in town and had our two Marconi boys from the “Cluny” invited for tea and dinner. They got up to Cousin’s house before Eleanor and I, we found them playing and singing ragtimes. There followed a most enjoyable evening, after dinner which was a very chummy meal more friends arrived, until our company numbered fourteen. Several were very musical, Reg brought his girl, a Miss Ramsay, a very good Contralto singer. Of course I sang some Scotch songs, “I’m gled ma hert’s ma ain” at the special request of Sparks. I also added to the amusement by sitting in a broken camp chair and going right through! We were a very happy crowd on the Veranda that evening. On Wednesday cousin Frank came home at lunchtime and he took some photos in the afternoon, I do hope they’re good. The black house-boy is photographed with us, much to his delight. That Thursday morning was my birthday, nice to wake up then in a nice house with friends. We were motored to the boat and Cousins got on board with us.

That afternoon we had a little birthday teaparty in the Saloon, ever such good fun, of course I read the cups. To crown the thing, the Marconi boys asked Eleanor and I to Potts’ cabin after dinner and all drank my health in Port wine! (I felt rather sick and ill on Friday).

More Scotties and still more! The second Engineer is a cousin of the Mackenzies in dear old St Andrews and the Raits in Leuchars, is going to report in summer when the Cluny again reaches Britain, I have asked him to call at Burnbrae. There are two Dundee men on here as passengers too. The 3rd Mate has taken some photos today, hope they are good, he’s forming a habit of coming along with “Sparks” each afternoon and taking seat by my deckchair, he is very nice too. Eleanor and I are very chummy with the Ship’s Officers.

We have had two nights of frivolity after a spell of uneventful journeying. Monday’s concert was very good, I really like the passengers here better than on the Balmoral and there isn’t so much stiff snobbery, all classes join together more, but then we haven’t the Soldier boys. We have a naval officer, Mr Ball, a very nice man and also some Jack Tars aboard and last night we had a topping dance. The heat was awful but I cared not, I went into it with zest and danced every dance. Mrs Jennings, Florence and Maud (of our crowd) got naval Jack Tar suits, and Eleanor came as “Sparks”. Some folks wondered afterwards later in the evening why two “men” both Ship’s Officers, were sitting together so close on the upper deck!! Mr Ball goes off at Dar es Salaam and has taken charge of a letter from me to Sergt White in the RE’s there. I want to see him if possible, a St Andrews boy. We are clannish! 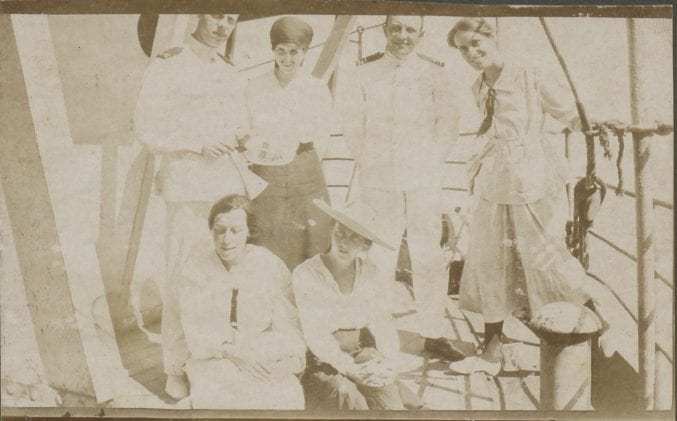