In 2012, Bristol Museum & Art Gallery and Bristol Archives took on the collections of the British Empire & Commonwealth Museum (BECM). There are some real gems in the collection, and we are slowly working through the thousands of objects, photographs and papers.

These three dolls look interesting, but it is only when you read the story connected to them that you realise just how important these three little dolls are. The dolls were given to the BECM by descendants of the original owner, who lived for a short time on the island of Grenada.  Maria Anderson moved to Grenada with her lawyer husband John Ahmuty in the 1780s.

She was there only a few years, as her husband died in 1786 and she returned to England. Like any European living in the Caribbean at that that time, she or her husband owned at least one enslaved house servant, Rebecca. When the widowed Maria left for England, she partially freed Rebecca, who bought the rest of her freedom herself.

It was the custom, Maria’s family believe, for a freed enslaved woman to make a doll of herself for her ex-owner. This tradition may have been just a present, in thanks, or perhaps something that replaced the living person and freed her spirit, her mind, as well as her body from slavery.

But, there are three dolls, obviously all made by the same person. Maria Ahmuty had three daughters: did Rebecca, whether freed or not, make a doll for each of the girls?

Each doll’s body is made of leather, stuffed with horsehair. The maker carefully cut and sewed the leather to shape the body, with curves and fingers, whilst facial features must have been moulded in wet leather to shape the nose, mouth and chin.  The hair (human) peeks out from under headscarves. The clothes are those of the 1790s, with a full skirt and white blouse and shawl. Each doll has a pair of white cotton pockets tied around the waist, the pocket or handbag of the period, for keeping small objects to hand (as in Lucy Locket who lost her pocket in the nursery rhyme).

Whilst the survival of the dolls for over 200 years is quite amazing, as amazing – and perhaps more interesting – is a letter that the family also kept. This seems to be a copy of an 1829 letter from Rebecca, with a note on the bottom to say that Rebecca Ahmuty, as she signed herself, was actually Rebecca Magg: ‘she writes by the name of Ahmuty in compliment to my Mother who gave her her freedom.’

The letter suggests that the two women remained in contact for many years, exchanging family news and gifts. Maria also supplied Rebecca with goods to trade. She had sent sewing pins, which Rebecca said she was already selling. Rebecca asked for needles, sewing thread and tape to be sent next, with the bill so she could send payment by the return voyage.

Rebecca by this stage was an old woman: ‘my days is growing shorter and shorter and full of pains.’

She answered Maria’s question, from a previous letter, about the local church, thanked her for the Bible she had sent and asked for another Bible and hymn book. She told Maria that she had no servants now, as she had to sell them when business was bad. This letter is almost all that we know about Rebecca: but that is more than is known about the majority of enslaved people.

There is also a note, written by one of the family, that the oldest doll was called Quasheeba. It is not clear now which of the three this would be, though it may be the middle-sized one, with ‘MM’ embroidered on her pocket.

The dolls are a rare survival of objects made by Africans, whether enslaved or freed, in the Caribbean. As such they are three of the gems in the collection. 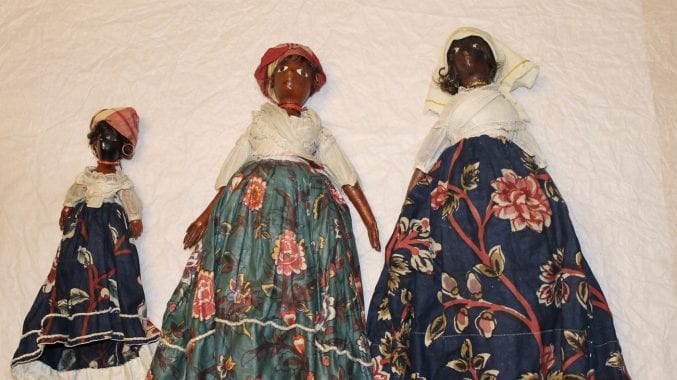