If you’re a regular visitor to Bristol Museum & Art Gallery you may well be familiar with the collection of Persian ceramics currently housed on the staircase between the World Wildlife Gallery and Ceramics.

Thirteen of these pieces belong to the Ades Collection, on loan to the museum for the past 30 years.

The ceramics date from the late-12th and early-13th century and form part of the Gurgan Finds.

They are exceptional in that they are largely intact after 800 years. Most were found in storage jars and it’s believed that they may have been buried in Gurgan (now north-east Iran) by a merchant trying to protect his stock from Mongol invaders in AD 1220–1221.

If this is true then the merchant never returned to collect them. They were found years later, eventually being acquired in Egypt in the 1940s by brothers Clement Ades and EN Ades.

The Gurgan Finds transformed understanding about medieval Persian pottery when they became known in the 1950s. During the 12th century, workshops were established at Kashan (now central Iran), by potters emigrating from Egypt or Syria. They produced high-quality pottery using the most sophisticated techniques.

We are very grateful to the Ades family who recently gifted these thirteen pieces to the museum permanently through the Cultural Gifts Scheme. Other ceramics in the collection have been allocated to museums elsewhere in the UK where they have been on loan and on public display.

Learn more about donating objects to the museum 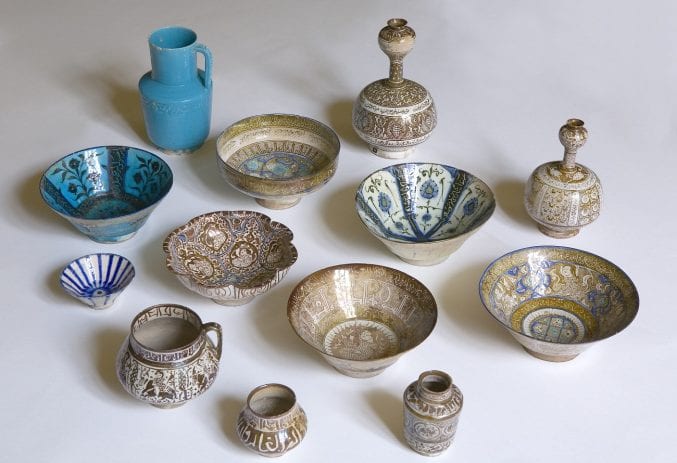