We made an interesting discovery recently. One of our cataloguers was in the basement going through old files of letters and receipts, looking for information relating to paintings by Roger Fry in the art collection, when he found a booklet printed for the Fry memorial exhibition held at Bristol Museum & Art Gallery in 1935 (1).

It contains the text of the exhibition’s opening speech written and delivered by Fry’s friend, and fellow member of the Bloomsbury Group, Virginia Woolf. After further research, it appears this booklet is one of the most sought after publications by the writer. The official bibliography of Woolf’s writings records its catalogue number as A21, and dealers regard it as one of the rarest ‘A’ items and generally missing from Woolf collections. Prior to the one found in Bristol, there were just five known in collections anywhere in the world.

The Fry family’s long historical connection to the Bristol was almost certainly the reason why a memorial exhibition for Roger Fry – now generally recognised as the artist’s first retrospective – was held here. Roger Eliot Fry (1866-1934) was the grandson of Joseph Fry, the founder of the great chocolate manufacturing company based in Bristol. Indeed, Roger’s father, Sir Edward Fry, was born in Union Street, then the main factory site. Roger was educated at Clifton College from 1882 until about 1884, before going on to study natural sciences at Cambridge (Fry’s father had been a zoologist), but in 1889 he rejected a profession in the sciences to pursue painting and, later, teaching, art criticism and curating. The exhibition was hung in Gallery VII (where the Bristol School of Artists are now displayed) between 12 July and 10 August, 1935 (2). The driving force behind the event was Roger’s sister, Margery Fry, who had recently given three drawings and six lithographs to Bristol. She made the rest of her collection available for the exhibition and encouraged other family members to do likewise. A total of 52 works were displayed, comprising family-owned pictures, two of the three paintings already in the Bristol collection (3, 4), and some loans from private collections, including three works belonging to (Sir) Kenneth Clark, who was at that time the newly-appointed and very young director of the National Gallery. Clark also wrote the foreword to the exhibition handlist (5), describing Fry as “the man who taught his generation to understand works of art more intelligently, to enjoy them more fully and to value them more highly … our greatest teacher since Ruskin.” As well as pictures, the exhibition included a harpsichord hand-decorated by Fry, in which, one critic noted, he showed “extraordinary skill in arranging a nude figure to fill the awkward space of the lid” (just visible in the exhibition photograph, beneath a self-portrait). On its return to the family, after the exhibition had closed, the curator of art mislaid the key to the harpsichord lid, and only found it after a frantic letter from Margery Fry.

Virginia Woolf typed her speech on foolscap paper (there is a carbon copy, with corrections, in the collection of the Smith College Libraries, Massachusetts). But it is not certain if the text was printed in booklet form before she delivered the address at the exhibition opening, and given away on the night, or whether it was printed and distributed later. The print run was just 125, which is why they are so rare today, and the curator at the time had several to give away. Thankfully for us, he slipped one into the exhibition file – where it remained for eighty years. We have now removed it from the old file in the basement and entered it into the Fine Art collection. A speech given to open any memorial exhibition is in essence a eulogy, a summing of achievements, an act of remembrance. In her incisive style, Woolf, echoing Kenneth Clark’s comment, writes that Fry brought about a change in the way we appreciate art. To illustrate this, she draws on her early experiences of looking at pictures. They were “silent inscrutable patterns; treasure houses with locked doors … in front of which learned people would stop. And we would trail behind them, silent, servile and bored.” Fry detested old-fashioned narrative painting – the pictorial description of a story or historical event – and claimed that a modern approach to both the making and appreciation of art involved the interaction of brain and the senses. His championing of the Post-impressionists (he coined the term) brought “life and colour … racket and din into the quiet galleries of ancient art.” And, for Woolf, pictures “are no longer silent, decorous and dull. They are things we live with, and laugh at, love and discuss.” She concludes by stating how Roger Fry “would have asked only that we should come to (art), whatever our calling, whatever our interests, with open eyes and open minds in the spirit of enjoyment.” (5) Handlist of works in the Roger Fry Memorial Exhibition

The booklet, comprising black letterpress on three leaves of off-white laid paper, folded and stapled into a 12-page booklet, was printed at The Garden City Press in Letchworth, Hertfordshire. There is no correspondence between Bristol and The Garden City Press regarding its printing, which probably confirms that Woolf commissioned its publication privately. Considering her husband, Leonard Woolf, was the owner of The Hogarth Press and often published her work, the question as to why it was printed elsewhere arises. Leonard Woolf had built up a good working relationship with The Garden City Press, and sent work to them which was not to be hand-printed at his press (later, after its London building was destroyed in the blitz, The Hogarth Press would move temporarily to Letchworth and into the premises of The Garden City Press).

Virginia Woolf later wrote a full biography of Roger Fry (its first edition printed with a front cover portrait of the artist by Vanessa Bell), and this would be the iconic writer’s last substantial work. It was published by The Hogarth Press in July 1940, eight months before her suicide in March, 1941. 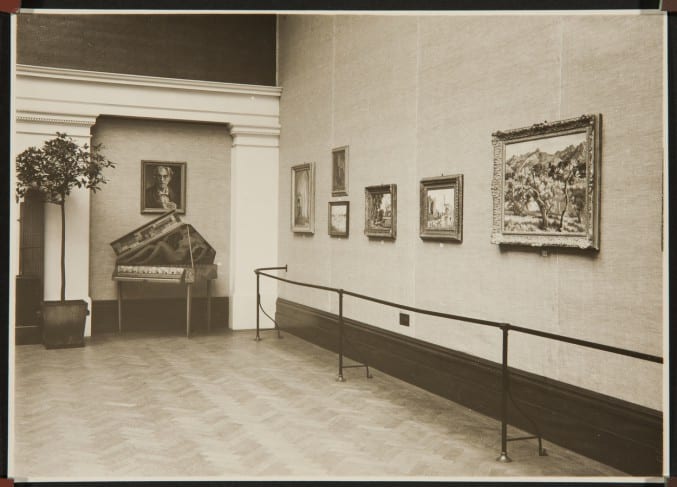