The third series of the BBC’s A House Through Time begins next week. Following examination of houses in Newcastle and Liverpool, this year David Olusoga and his team trace the history of a house in Bristol – No.10 Guinea Street in Redcliffe.

The team used many documents from Bristol Archives for their research. I worked with the production team to ensure our archives were safe during their moment on the small screen.

How were you involved with the A House Through Time recording?

The staff at Bristol Archives helped the series researchers with their investigations in summer and autumn 2019. The researchers looked at a wide range of documents relating to the house, the Redcliffe area, and the people who lived in the house. They then selected documents to appear in each episode. My main role was to ‘chaperone’ the documents during filming. A different team of researchers and film crew worked on each episode, and each filming set up was slightly different.

So, the film crew came to Bristol Archives?

That’s right. The crew wanted to film one of the earliest documents related to the house in one of our strongrooms. This was best for us, as the thought of letting 18th century documents out of the  archives tends to bring us out in a cold sweat. On the day itself, the schedule had to be pushed back.

Philippa, one of the Unlocking Our Sound Heritage archivists, helped me accompany the crew, their equipment and David Olusoga up and down to the strongroom. The strongroom felt stuffed with people – the director, the camera-operator, the lighting technician, a couple of researchers, as well as David, Philippa and myself. After a lot of setting up, adjusting lights, tables and documents, we just managed to finish before security locked up our building for the night.

In the TV series, David Olusoga often visits places besides the house. Did you have to take documents out of the archives?

I took a Glenside Hospital case book to be filmed at what is now Glenside Museum. Normally we don’t let documents leave the building. Whizzing across Bristol in the back of taxi with the carefully packaged book certainly felt very alien. The filming took place at the museum in the former hospital chapel. 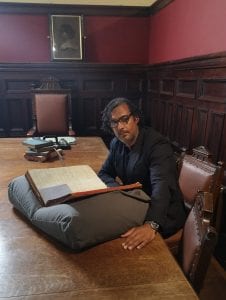 “During a break in the filming, I asked David for this photo. I must say that he was incredibly gracious about posing with the case book and I hardly felt like a history fangirl at all.”

The crew had a track to mount the camera for panning shots which helped it fit into the extremely confined room. I did my best throughout the filming to sit in a corner where I could keep the case book in sight at all times. Unfortunately, I should probably have kept my eyes on my feet as I managed to trip over the camera track. Although, not, I hasten to add, while I was carrying any archives.

It must have felt good to see the casebook in the place where it was originally created and used. What we all want to know though – did you get to visit the house?

Yes, on the last of the three days I spent with the crew. It was very exciting to be inside the house! When I arrived, there was even more preparation taking place than on the previous two occasions. The documents had been brought to the house already by one of the other archivists. Again, I tried to keep out of the way as much as possible while making sure that the documents stayed safe.

Once filming started, I realised the sandwich I had bolted on my way over to the house was not going quietly. At one point the entire crew and the world-famous historian stopped and looked around at my wildly growling stomach. They can probably edit that bit out in post-production, can’t they?

A House Through Time starts on BBC2 on Tuesday 26 May at 9pm. Tune in to find out what the document revealed about the 18th century residents of the house.

David Olusoga will be talking about the show, and the accompanying book, in an streamed interview with Bristol Festival of Ideas on Wednesday 27 May.

Bristol Archives will be hosting House research from home on Wednesday 10 June. It’s a free online talk that will show you how to investigate the stories of local houses. 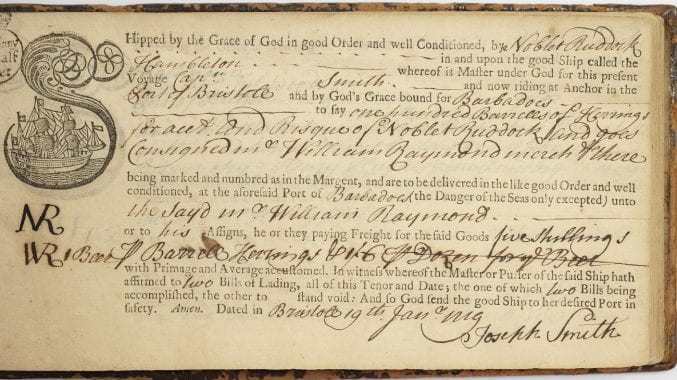