Unlocking Our Sound Heritage (UOSH) volunteer Mike Hatcher hears about life in an idyllic spot on the edge of Lake Tanganyika – and the father and son who documented it in a local newspaper they called Abercornucopia.

Listening to the memories captured in audio files from the British Empire and Commonwealth Collection (BECC) at Bristol Archives, I’ve been transported to times when even the most ordinary life sounds extraordinary.

And it’s not all about playing tennis and bridge at the local gymkhana. There’s Beatrice Baynes, the GP who helped build a medical school in Nigeria. Ben Cormack-Wilmot, the health inspector who vaccinated thousands against smallpox in Tanzania. Diplomat Arthur Collins in Dhaka as the Indo-Pakistan war broke out in Bangladesh.

Colin Carlin’s tapes tell a more personal story but one that also captures the political and economic upheaval as African countries transitioned from colonial rule to independence.

Growing up in what was then Northern Rhodesia (now Zambia), much of Carlin’s childhood sounds rather idyllic. He arrived there in 1949, aged just seven. His father John was an ex-Fleet Street journalist. He took his family out to Abercorn (now Mbala), a remote hill station built on high land near the southern tip of Lake Tanganyika.

Carlin describes Abercorn, set 5,000 feet above one end the world’s longest freshwater lake, as “a wonderful place to grow up”. Senior machine operator, Arum Luchewe, checks the inking on a page of Lyashi at the Lake Press building.

The Carlins did not arrive in Abercorn with any grand plan, but soon John decided to set up a small printing works.

At first his Lake Press team produced simple leaflets and receipts for local businesses. Before long it was also printing Lyashi, an official government newspaper.

Then in 1962, John Carlin decided to produce his own “bush telegraph”.

Called Abercornucopia, the six-page newspaper ran for 39 issues until July 1966. It captured everything from club gossip to significant political developments amid Zambia’s 1964 transition to independence.

Politically and economically, these were turbulent times. But in Abercorn, all seemed calm. We know this because, thanks to Colin Carlin, a full record of Abercornucopia can be found online. The lead story from the November 1964 edition, printed just a couple of weeks after independence, notes that celebrations in the village were “notable for a complete absence of untoward incidents or undue excitement”. Alongside Abercornucopia, the BECC recordings convey a unique and personal slice of real life as Zambia embraced independence.

In November 2018, Colin Carlin returned to the country for the first time in nearly 45 years.  He joined guests, including Zambia’s President Lungu, for a commemoration marking Germany’s final surrender in the First World War. This had taken place in Mbala exactly 100 years before. While there, he found the old Lake Press building to be in excellent condition, and now home to Zambia’s national pension scheme authority.

“Lake Chila looked as charming as it ever did,” says Carlin. The local authorities are now trying to establish the area as a tourist destination. With archaeological excavations at nearby Kalambo Falls now indicating that humans have been active there for 200,000 years, Carlin seems keener than ever to promote what he calls the “exceptionalism” of this little-known corner of central Africa. 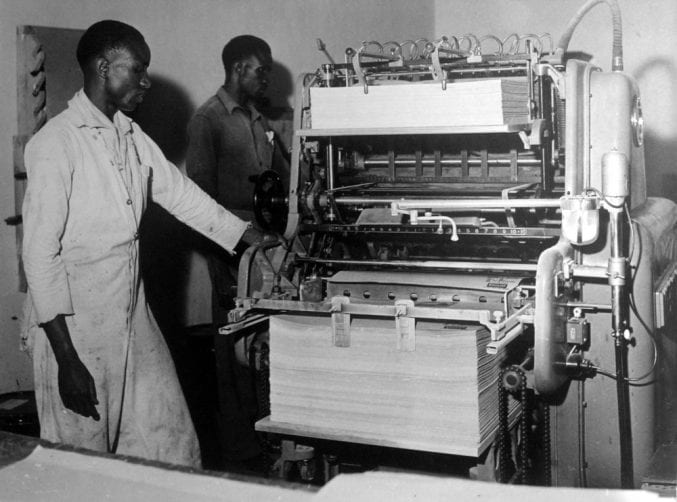