by Jasmine Thompson, the artist of A Movement Not A Moment

“Hello? Are you the artist?”

I turn around and a family is standing behind the barriers looking at me. I’ve no idea how long they’ve been there watching. I also have no idea what they are going to ask me next, or respond to what I’m drawing.

“Please can we take some photos of your work? We’ve been walking around the museum for an hour and the kids haven’t stopped talking about this! It’s so good to see someone create something with an important message – so thank you”.

It’s responses like this which honestly make it worth it. I step aside and let the family take photos of the mural I’ve been working on for the past three weeks.

We’re in Bristol Museum & Art Gallery, the mural sits on a huge white board in the vast, echoing front hall. “Black Lives Matter” is written in huge letters across the middle of the artwork, which I’ve created to pay respect and honour the movement. I’m about to complete my final few touches, and the drawing is done. I called it “A Movement Not A Moment”, and it’ll soon be ready to take up space in that hall for the foreseeable future.

Creating a Black Lives Matter mural for the museum has been a journey and a blessing. The opportunity arose at the end of 2020, which for context, was an immensely political and traumatic year for many of us. 2020 saw the murder of George Floyd, which sparked outrage and protests globally, and was a catalyst for an even bigger conversation around racism in modern day society and the issues we still face.

Art spaces are often considered very colonial. There has been quite a public conversation for many years on decolonising these spaces, and what should and shouldn’t belong here. Historically the exhibits and objects you find in them have been curated by white people and little room has been left for people of colour and marginalised communities to contribute to the narrative in any way, despite much of the content deriving from diverse cultures across the world.

The opportunity for a black artist to create artwork which tells a story of the movement and experience may for some people feel like a small step, but what it represented was immense. I am a 27 year old mixed race woman, of British and Jamaican heritage. I am one person, so cannot speak for everyone, or touch upon every intricate detail of the experience. Just having the space to be able to put my work on a platform, tell these stories, share the work and legacy of the people that have shaped the BLM movement, and highlight the societal work that still needs to be done – is a huge blessing.

So, how did this all come about? It started as an open call for any artist to submit a proposal for a Black Lives Matter artwork to be exhibited in the space. Leaving it open allowed people to interpret this brief however they felt right. 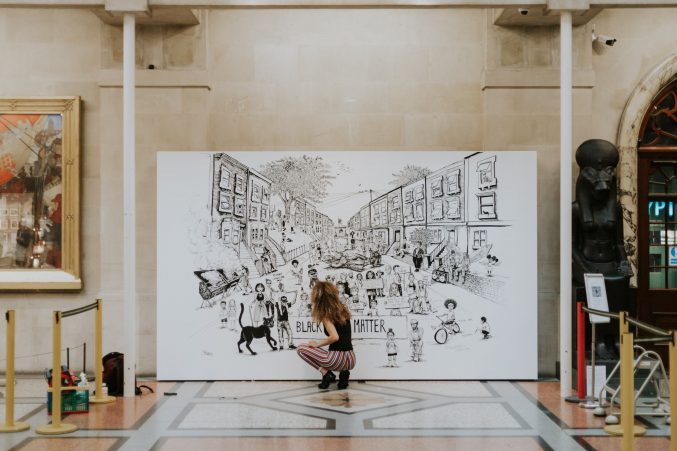 My pitch was a mural, which pays homage to the people and events over time that have shaped the BLM movement into what you see today. George Floyd sadly was not the first, and people have been pushing for equality and equal rights for years leading up to this. I wanted to celebrate as many of their contributions as I could possibly fit in one mural, and create something that would educate, and also just celebrate the power of black people.

It was to be a celebration of our rich and vibrant culture as much as it is a reference to the recent activism surrounding the movement. So, my pitch was chosen, and an 8m wide wall was built in the front hall of the museum to accommodate it. I worked closely with the fantastic curator Julia Carver, to shape the outcomes of this commission, and allow my vision to be realised. The commission was supported by a donation to Bristol Museum Development Trust from Simon Baker – a long-time donor of Bristol Museum & Art Gallery.

The mural contains multiple references to historical context. This work showcases those who’ve used their platform in challenging times, and nods to cultural references that have brought joy in times of darkness. Some of the references are pretty clear (there is a large Edward Colston statue covered in graffiti lying across the middle of the piece – I wonder what that’s about?!) whereas some are subtle nods to moments in history.

The location is City Road, a main road lying in the heart of St Paul’s in Bristol. For many generations it has been home to the city’s African and Caribbean communities, and sees St Paul’s carnival bless the street every year. Pictured are street food stalls, Samba dancers in full carnival dress with a sound system by their feet, and flags being flown from the windows. These elements celebrate the joy of carnival and some of the key elements that bring it to life. 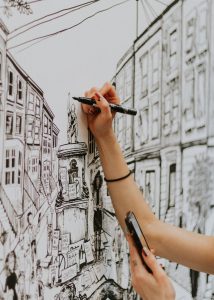 The empty plinth is drawn at the end of the street, a fairly clear reference to the events of last summer when the Colston statue was infamously toppled and thrown into the harbour – waters he once traded enslaved people on. Since then, the plinth has become a huge focus for conversation and a symbol of the movement and what happened that day. The statue is lying across the floor surrounded by people protesting, some of which are men dressed in formal wear and top hats, carrying briefcases. They’re a nod towards the Windrush Generation of Bristol, and stand tall, looking over the fallen statue. Jen Reid stands alongside, who is a local activist who had a statue created of her which was briefly erected on top of the plinth last year.

In August 2016, American Football player Colin Kaepernick chose to kneel during the national anthem at an NFL game, a gesture against racism and police brutality in the United States. What followed was many athletes across multiple sports choosing to take the knee in solidarity, pushing for equality within sport and society. Lewis Hamilton has advocated massively in Formula One for more inclusion, and the two are pictured in the mural kneeling amongst the crowd.

Also included is a reference to Stephen Lawrence, the black British teenager from London who in 1993 was murdered in a racially motivated attack whilst waiting for a bus. His story gained huge attention, and shifted attitudes towards the police and racism in this country. A quote from a Stephen Lawrence Day event was included on a plaque in the crowd.

Marsha P Johnson was a hugely influential gay liberation activist and self-identified drag queen, who is pictured wearing a floral headdress. The LGBTQ+ community have not only championed the BLM movement but have been pillars carrying it since the beginning, and so it’s important their contribution is also celebrated. BLM was founded by three Black women, Alicia Garza, Patrisse Cullors and Opal Tometi, two of whom identify as queer.

Tarana Burke, founder of #metoo, is sitting on the wall opposite a black couple in leather jackets and black berets- a nod to the Black Panther Party. An actual black panther pays respect to the legacy of Chadwick Boseman and how the Black Panther film brought people together. 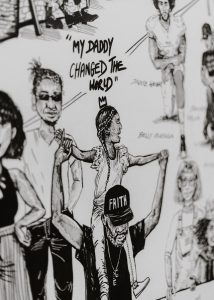 George Floyd’s daughter is quoted within the piece, proclaiming “my daddy changed the world”- a heart wrenching moment from protests in the US last summer. John Boyega gave an incredibly powerful speech in the UK protests, a scene I also included. Two young kids in crowns and royal clothing are holding up the Black Lives Matter sign, because how often do you see young black Kings and Queens in these spaces in all their glory? Never, right. So that’s about changing that whole narrative.

The names etched into the street are the names of some of those who’ve lost their lives or been victims to police brutality and racism, as an act of remembrance to those we have lost.

You can read about the people within the mural in more detail on the Google Arts and Culture feature.

Creating the work itself was a great experience, but I also had the joy of doing so live. I wanted people to see and watch me drawing in front of them, as it felt important for young people or other artists of colour to see that these doors are there for them too. Working live also gave people the space to ask questions and approach me about the piece.

Throughout the three weeks I heard so many insights on what the work meant to different people. It can feel like works of art in historic gallery spaces are created by people that you don’t ever see or know of, so I really wanted to make myself visible and change the status quo.

I was joined throughout the journey by a very talented filmmaker and good friend Manoel Akure who photographed and filmed the install, along with Costa (both MAKO Media). I really wanted to involve the community in as many ways as possible throughout this journey, and hiring a filmmaker to capture everything was a great space to do that. On the last day I was also joined by Khali Ackford (Khali Photography) who focussed his lens on the mural to capture some stunning photos. A huge thanks to all of you who supported and used your talents to capture this whole thing.

So, what are my hopes for the piece? Well, there’s power in positive representation. There’s also an immense amount of creative talent in this city – so many incredible artists who all equally deserve the platform to showcase their work and create beautiful pieces of art. I hope this piece simply existing on these walls encourages the commission of more black art in contemporary art spaces, and opens the door for more young black creatives to do the same.

It’s been one year since the fall of Colston and whilst steps have been made, the work is far from over. Whilst this period of time has brought a huge amount of trauma to many of us, I hope this piece celebrates the strength and power in unity. We must continue to uplift underrepresented voices and narratives. We must continue to hold difficult conversations, and ensure those spaces continue to be made. We must continue to push for an equal society.

With thanks to Bristol Museum & Art Gallery and Simon Baker for the opportunity. Thanks to Manoel, Costa, and Khali for documenting it so beautifully. 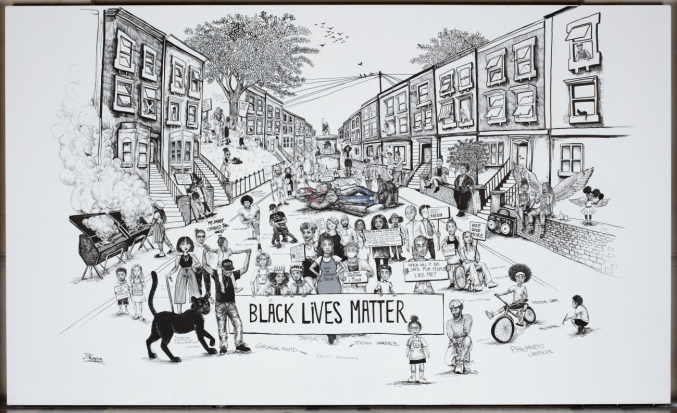