In 2010, workmen in a downstairs room of the Red Lodge Museum discovered a well that was covered over by a brick capping. It was so well hidden that nobody had known of its existence. The Red Lodge well was probably dug at the same time as the house was built, in 1580, when it would have been outside the house.

Some 50 years later the house had been extended over the well although we do not know when people stopped using it. A private water supply was a valuable resource and the well may have been in use until Bristol Water brought piped water to the city in the middle of the 19th century.

Cavers descending the well noticed the remains of oak timbers set into the walls. These would have been used by the Elizabethans during construction. A caver sawed off one of these oak stumps and dendochronology (the study of growth-rings in trees) confirmed that it dated from the 16th century. This is probably the first time that a well has been dated using dendochronology. The men who built the Red Lodge well were working with extremely hard stone (rocks of the Quartzitic Sandstone Group) in a dangerous environment. They knew how far they would have to dig through the hard rock to reach the water table and obtain a good supply of clean water for the household. The water has been analysed and it is of good quality.

You can watch a documentary about the discovery of the well which includes film footage of its exploration.

Thanks to the Ibstock Cory Environmental Trust, Bristol Water plc, and Dendochronological Consultancy Ltd whose support made the investigation and display of the Red Lodge Well possible.

5 comments on “The Red Lodge Well” 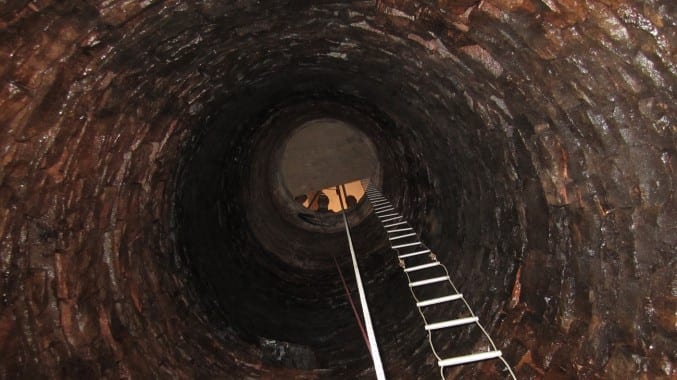