Searchroom Officer Dan Jones joined the team at Bristol Archives in January. Here he talks about his role in running the public searchroom.

It’s now been ten months since I started work at Bristol Archives. While I’m very much part of the team by now, I still feel like I’ve only just started to learn about the archive and its remarkable collections. As a history graduate, I was very excited to start working here. If anything the scale and quality of the collections have surpassed my expectations, to the extent that they are a little intimidating! From the collection of medieval charters (one of the best in the country) to more recent additions like the records of St Pauls Carnival, I don’t think it’s an exaggeration to describe Bristol Archives as a treasury of the history of the city.

Although I am, by now, starting to know my parish registers from my city charters and my probate inventories from my Housing Committee minutes, I am still very much a novice compared to my colleagues whose knowledge and expertise impresses me daily.

Our two main jobs here at Bristol Archives are to care for this amazing collection and make it available to anyone who wants to see it. Our work in the searchroom forms part of the latter job; we are a crucial link between the public and the archives and we facilitate a wide variety of research. People using the collections range from those just starting to research their family history to authors and academics, as well as archaeologists, local historians, teachers and media organisations.

While I expected the archive to be of great interest to students of different types of history, I’ve been surprised by how widely they are used by people working in other fields. Our collections are, for instance, regularly used by developers, architects, planners and householders for current and proposed building projects.

One element of the job I’ve really enjoyed is leading tours of the archives; it’s a pleasure to introduce our archive to people who may never have set foot in one before. Their reaction at seeing historic documents is infectious and helps maintain my own enthusiasm.

The first thing that most people ask when you tell them you’ve started work in an archive is “Is it like Who Do You Think You Are?” Mostly it isn’t, of course. Viewers of that TV show don’t see the hard work that goes into uncovering those stories and we sometimes have to deal with the expectation that we have everyone’s family tree ready to hand over to them.

You do sometimes though have the privilege of sharing some special discoveries with visitors. I recently helped a couple who visited from the north of England and was able to find some fascinating documents about their ancestors who had been butchers in Bristol. We found the location of their two shops on old maps and even found photographs of one.

One of the family had served as Lord Mayor and we were able to find his official mayoral Christmas card and a fantastic photo of him in his full mayoral robes which apparently bears a striking resemblance to their son. The couple ended up spending the whole day with us and were delighted with what we found – I got a real sense of job satisfaction. 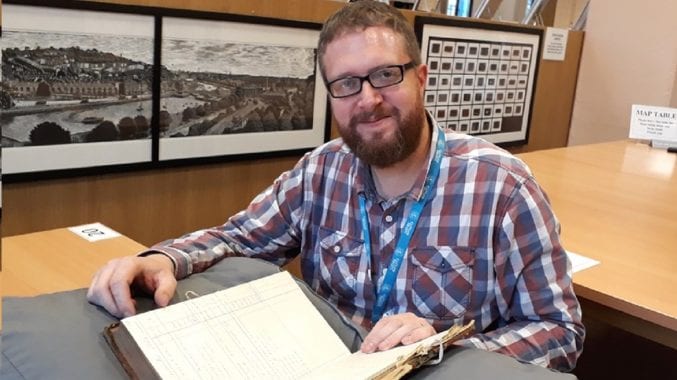