So we can keep everyone safe, all visits must now be booked in advance. Find out more and book your visit. We can’t wait to see you!

Despite the roar of the M32 driving into the heart of Bristol, an altogether greener route delivers bird song and the buzz of bees, frogs, badgers and urban foxes. Bristol is home to local acting and global thinking people. For many residents, socially minded green activism is their ‘rent for living on the planet.’

There’s no end to the vibrancy and choice people can join in with. There are permaculture design courses, free bicycle workshops, tree planting, celebratory mass bike rides and ever-increasing cycle lanes and pedestrian ways. 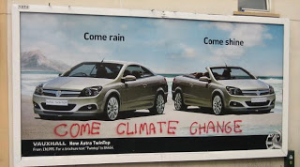 Beneath the hollering billboards local residents take up their spades. They transform patches of wasteland into urban farms, whilst people daub alternative slogans on the billboards known as ‘subvertising’. It’s a method they see as changing an advert to inspire a social message instead.

Wildlife corridors like the Bristol to Bath Railway Path connect the city and help it to breathe. The city can provide food and fresh air with its green spaces, playing fields and foraging in hedgerows. Sims Hill Community Supported Agriculture (CSA) and Grow Wilder in Frenchay are host to new urban farmers. Neighbours have pulled down their fences and created a shared garden space. Residents have blocked diggers to avert them from destroying habitat.

The former railway embankment was compulsory purchased in 1996, after a five-year campaign by Avon Wildlife Trust and local people to save it from development.

At the entrance, mosaics show a scene featuring a person with a placard. A figure stands in front of a digger by trees and flowers that lay toppled. An insect hotel welcomes solitary bees, made from stacked pallets.

Up the path, sits a probable former signal building ‘The Moon Temple’. Artists have adorned it with bright paints and poetry.

Similar local victories are at Narroways Hill, St. Werburghs. Saved in 1997, 800 local people demonstrated and it is now a nature reserve.

In 2008 locals took to Bristol to Bath Railway path to show their protest at proposals for it to become a ‘bus rapid transport’ road. The path is still home to birds, bats, plants, wildflowers and edible berries. With locals ‘eye’s off the ball’ for a few days, another development recently cleared a stretch of the hedge. Calls to replant, among other demands, echo in spray paint on the hoarding along the site.

The climate movement began to build momentum in the early 2000s. People realised that the global climate change talks were failing. The targets to reduce greenhouse gases were side-stepped. Further inclusive ideas and action to halt climate breakdown were therefore sought.

The Bristol Channel and Severn Estuary has the second highest tidal range in the world, so with sea levels rising, Bristol is super-conscious of this fact.

Bristol Rising Tide worked towards the Camp for Climate Action and took local and regional action. The annual camp was an opportunity to educate, show alternatives and take direct mass action. It attracted international attention with many places copying the model today. 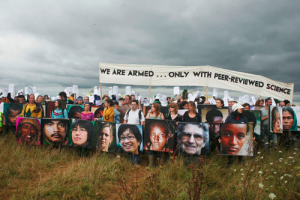 It joined residents and action groups to stop the third runway at Heathrow. It closed down coal fired power stations for good. It joined up the dots between climate breakdown and the economy. It called out false solutions, acting in solidarity with the global south and standing against climate racism. In 2011 the annual camp was disbanded and out of the ashes Reclaim the Power was formed. The local group Bristol Rising Tide continues and supports the work of ‘Reclaim the Power.’

Opposing Bristol Airport Expansion
In support of residents in 2006, their first action as ‘Westside Climate Action’ was to pitch up outside the headquarters of North Somerset Council. They delivered a giant letter (6ft/1.83m tall!) and set up a meeting with the council, while outside playing the sound of planes taking off and landing.

The Oil and Gas Bank – RBS
On 15 October 2007, six people dressed as homeless polar bears locked themselves together. One polar bear said, “I am here to let RBS know that their funneling of cash into fossil fuel projects is making myself and millions of other animals, including humans homeless.”

Another said: “If carbon dioxide molecules had corporate tags of responsibility, the atmosphere would be full of RBS logos mingling with those of BP, Exxon and Shell!” 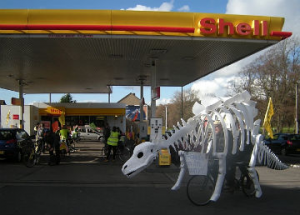 Shell Oil
On 12 February 2011, activists went on a bicycle tour (including a large Stegosaurus bike!) and paid a visit to Bristol’s Shell petrol stations. They also called on Shell to halt its activities in County Mayo, Ireland.

SSE Gas Company
In 2019 Residents Against Dirty Energy (RADE) and Bristol Rising Tide joined Reclaim the Power at the SSE energy company in St Phillips. They tied windmills to the fence and had banners demanding ‘Less Gas More Wind’

Victory
Reclaim the Power and friends have much to celebrate. After five years of creative action they have stopped Fracking in the UK. Those that live in Bristol can come home to a saved wildlife haven and reenergise with food from a community orchard and allotment. Green Brizzle is buzzing! 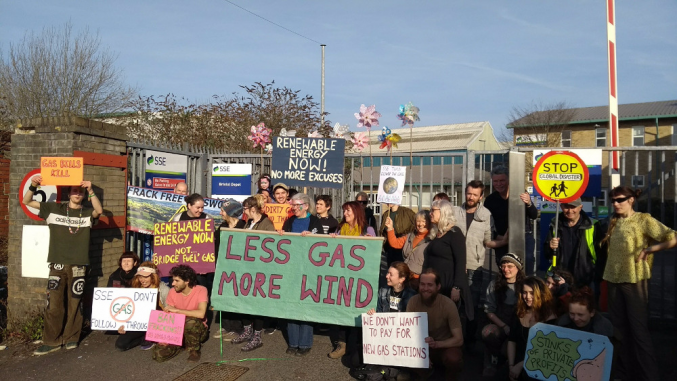