On Saturday 6 August an exhibition of drawings and paintings by Adela Breton went on display at Bristol Museum & Art Gallery.

Breton was a Victorian traveller and artist who devoted the later part of her life to capturing ancient reliefs, carvings and decoration on Mayan temples across Mexico.

A huge amount of behind-the-scenes work has gone into preparing for the exhibition. Conservators have spent nearly four years restoring and preserving the artworks in order for them to go on public display.

Harry Metcalf, Paper Conservator at Bristol Museum & Art Gallery, was involved in the later stages of the project and says how the process gave them an insight into Breton – the artist. “What’s interesting is that she used a variety of methods to record the decoration and carvings, including prints, watercolours, sketches and notes.

This has enabled us to understand how she went about working at the sites and the techniques that she used.”

Many clues are visible in the works such as various cuts she made in the paper, which Harry believes were done to create a ‘flap’ that she could lift up to view the wall beneath her drawings.

The cuts were then sealed with brown paper tape which has discoloured over time. The conservators left it in place however, as it gives a valuable indication to how Breton worked.

There are also many sections that have been left blank, leading curators to believe that she wanted to remain true to what she was copying where detail had already been eroded or damaged. This highlights how crucial her work was in capturing the details of the remains before some of them were lost forever.

“One of the most important aspects of her work is that very little of the original colour exists so this collection is supposedly now the most comprehensive record of how they would have looked at the turn of the 20th century.” Mounting the pieces proved quite a challenge as Breton worked exactly to scale. Harry used a technique called strip-lining, where pieces of a Japanese paper were used to attach the edges of the drawings to a rigid backing board.

Using a conventional picture frame would have added too much weight for them to be moved and would also have caused problems in displaying matching sections of paintings.

One piece consists of four sections and there wasn’t enough space in the gallery to display them one on top of the other. But the team were still able to hang two of them close enough so that visitors can see where the details join up.

“It’s not often that works of this size are put on display. It’s a great opportunity for people to come and view these extraordinary works and learn about the life of a remarkable person.”

Adela Breton: Ancient Mexico in Colour is on display in our Upper Second Floor exhibition gallery until 14 May 2017.

5 comments on “Preparing for Adela Breton” 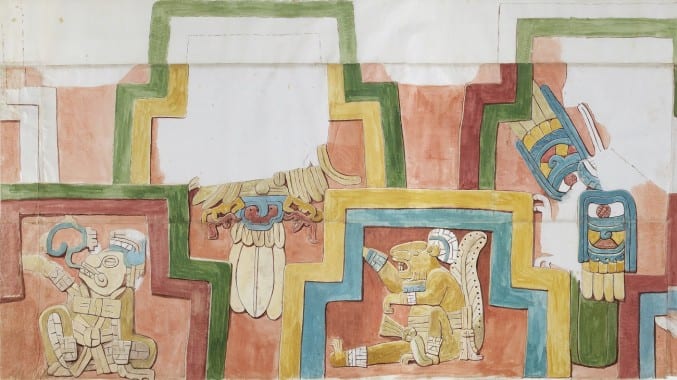