Throughout 2019, staff from the British Empire & Commonwealth Collection at Bristol Archives worked on a project to open up access to some of our oldest photographic collections. This was generously funded by the Paul Mellon Centre for British Art.

From the middle of Queen Victoria’s reign onwards, the British Empire rapidly spread across the globe.

People who went out to live in the colonies took with them their customs, habits and furnishings. They established little corners of Britain, with sports fixtures, churches and amateur dramatic societies. They also decorated their houses with lavish interiors which were often impractical for their surroundings.

It was not uncommon for early British settlers to equip their thatched huts in Africa with mahogany sideboards and crystal decanters. When they returned to a house in Britain, many years later, they would decorate them with Maasai carvings and zebra skin rugs.

The British Empire & Commonwealth Collection holds many photographs and drawings which highlight the British experience overseas. They also show local responses to exported “Britishness”. The historian P D Morgan wrote about this type of interactive system, between coloniser and colonised, using the phrase “One vast interconnected world”. George Golledge was manager of a tea plantation in Ceylon (now Sri Lanka). He took this photograph on a day out at the Colombo racecourse around 1912.

Newspaper reports from the time describe the mix of races and classes who frequented race meetings. This photograph shows both British and Sri Lankan people milling around in their best attire. Many British people believed they were helping local communities by teaching them their customs and crafts. However, local people themselves weren’t given many choices. Sometimes they merged British ways of doing things into local customs, and sometimes adapted or caricatured them. Some responded by creating their own industries to manufacture items to British tastes.

Makongoro wa Changoro and Juma Wasila were apprentice carpenters with the Public Works Department in Nairobi. Their instructor was Charles Bungey, who photographed them with a plan chest they produced in 1914.

Many people considered them fortunate to be able to learn a trade. However, they were largely trained to make goods for a British market, rather than items to bring increased comfort to their own communities. The photograph was taken by Alfred Tamlin, who worked in West Africa as a mahogany trader.

Over time, the British began to copy habits and customs from the local people they met. People who stayed overseas often incorporated local design or traditions into their homes and lifestyles. They also sent home photographs and souvenirs which introduced relatives in the UK to other ways of life. The Forshaw family lived in Shanghai for many years, and had a holiday home at Beidaihe, then called Pei-tai-ho by the British. This photograph shows family members at the beach in 1927, carrying typical Chinese parasols. This is one of a number of images of the family wearing local dress or accessories.

The Paul Mellon Centre for British Art recognised the importance of our collection of photographs and drawings in highlighting the British experience overseas and local responses. Last year they awarded us a grant to catalogue and digitise 12 collections on this theme of cultural exchange.

In total, members of our team catalogued over 4,600 images and digitised over 2,200 photographs.

The photographs included in this project are some of the oldest in the collection. They were taken in South Asia, East and West Africa, Australia, China and the Caribbean.

Thanks to this grant, they are now available to researchers studying this important aspect of colonial history.

More images from the project are displayed in a small exhibition, now open in the Bristol Archives searchroom and also available online. 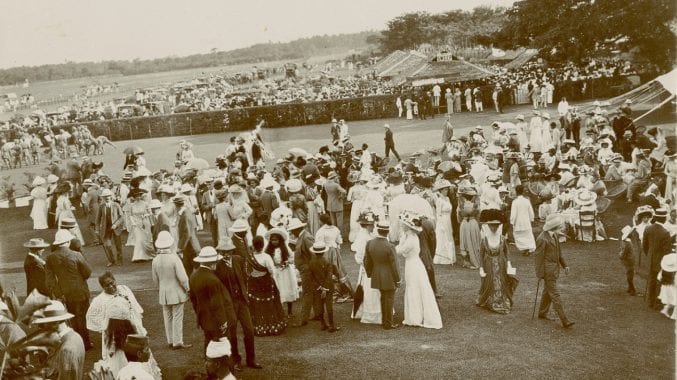