In the 1960s museums across the UK put together collections of objects that were sent into schools to ‘inspire’ and ‘educate’.

Derbyshire Museums school loan service bought material from local dealers and auction houses that came from countries across the world. In 2018 their loan service was finally withdrawn from use. In early 2020 they began a project to redistribute those objects to other museums with World Cultures collections.

After looking through their lists of items from the Pacific, Africa and the Americas it was clear that so much of what they had would fit well with our historic and modern material. Covid delayed the arrival of the objects from Buxton Museum and Art Gallery until July 2021. Covid also meant that their original plan to work with local schools on a new educational programme had to be reconsidered.

A new element called ‘Travelling Stories’ was set up. Money was offered to four of the 50 museums that had received objects so that they could engage artists to connect creatively with the material. Immediately I knew I wanted to commission artwork from an indigenous Pacific artist. 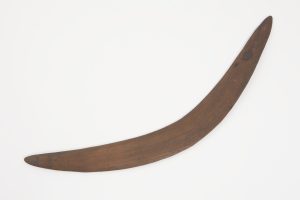 His father’s family is Marri Ngarr and originate from the Moyle River region in the Northern Territory.

Ryan is an established artist with a significant reputation so we supplemented the project money with funding from the Friends of Bristol Museums, Galleries and Archives.

With this we were able to purchase his response to our historic Australian material – ‘Aero-dynamism (past the point of no return)’. 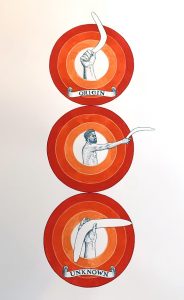 ‘Aero-dynamism (past the point of no return)’ is a response to the multitude of Aboriginal objects and artefacts that are held in museum collections across the work, particularly in Britain. Often our tools are held and exhibited with no credit or didactic information. Over time this has been done by collectors in haste and ignorance; seeing Aboriginal people as one homogenous group. In reality, Aboriginal Australia is as culturally diverse as continental Europe.

This work symbolically references the thrown returning boomerang that has become famous worldwide and a pop cultural icon. It is a tool, that since its inception, is proof of Aboriginal strength, intelligence and ingenuity. It indicates a working understanding and application of the laws of physics and aerodynamics. Aero-dynamism (past the point of no return) is a play on the irony of a returning multi-use tool becoming a static object of display, where its origin is unknown.’ – Ryan Presley

With the rest of the project money I was able to fund a second artist, looking at material from Africa. I was put in touch with someone who had recently submitted a proposal for our Black Lives Matter commission, Akhran Girmay.

Akhran is a young British freelance illustrator of Ethiopian heritage early in his artistic career.

He connected with several Nigerian wooden paddles made by the Itsekiri people of Southern Nigeria.

‘I submit this piece (‘Drifting from the Delta’) as a conversation starter or one of many first steps towards understanding the almost lost pasts of items such as these. It’s time to trade colonial omission and appropriation, for deeper and more compassionate cultural exchanges and dialogue. Through this project I have discovered a rich history expressed and encapsulated within these paddles by a vibrant culture that may have remained hidden from me still.

I, along with many others, want to see equal representation of long overlooked and silenced histories. Especially ones which include the chronicles of African nations, being of African descent myself. It’s programs such as Travelling Stories that reassure me of the underlying will of people wanting to understand one another and what makes our identities so interestingly different.’ – Akhran Girmay 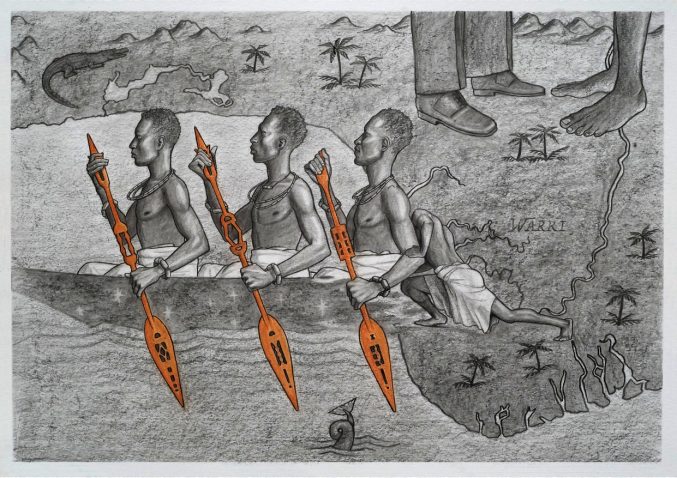 These two new acquisitions are now on display in the ‘Curiosity’ gallery at Bristol Museum & Art Gallery. I am grateful for the opportunity this project has given me to widen our collecting activities in the World Cultures department.

I hope we can continue to do more to showcase artists from non-European traditions and perspectives and give context to our historic, colonial object collections.