The next in our series of blogs inspired by images from the 53rd Wildlife Photographer of the Year competition, is from Lee Hutchinson and Rowan Whitehouse. They reflect on the impacts of ocean pollution after seeing Sewage Surfer © Justin Hofman.

My initial reaction to Justin Hofman’s seahorse photo was one of amazement: “What a beautiful creature!” I confess, I thought it looked cute (in that habit that humans have of anthropomorphising animals).

A moment’s pleasure and I was drawn to the cotton bud – a reminder of the vast amount of man-made waste that contaminates the ocean – and I suddenly felt saddened at a far more harmful habit that humans have – of purchasing and polluting the world with non-renewable, oil-based plastics.

Hofman described his own emotional response to the photo shoot: “We went from such a state of bliss with this beautiful little animal to having this human impact literally wash over us… I was quite angry and frustrated.”

The grim reality of the plastics problem, as outlined in a recent report by the Ellen MacArthur Foundation, is that every year “at least 8m tonnes of plastics leak into the ocean – which is equivalent to dumping the contents of one garbage truck into the ocean every minute.”

Microplastics are already in the food chain, and by 2050, the Foundation predicts, the ocean will contain more plastic by weight than fish.

Calls for urgent action are sounding throughout the scientific community.

“The health of our oceans is under threat,” declared David Attenborough in the run up to the BBC’s Blue Planet II, “They’re changing at a faster rate than ever before in human history.”

And if that thought isn’t alarming enough, the authors of a recent paper on biological annihilation concluded that “the sixth mass extinction is already here… the window for effective action is very short, probably two or three decades… painting a dismal picture of the future of life, including human life.”

The pollution of the marine environment is a complex issue. When it comes to the question of how to reduce the continuing rise in the average temperature of the ocean, David Attenborough is stumped for an answer, “but,” as he says, “we could actually do something about plastic right now.”

So what can we do?

Well, as individuals, we could try to minimize our use of plastic (next time you’re out shopping and feel like picking up a bottle of water, consider this: bottled water is 1000 times more carbon intensive than water from a tap).

We could support efforts to transition to a circular economy, which prioritises eco-design and reuse rather than single use of plastic packaging.

We could promote the development of sugar-based, biodegradable plastic, as made by scientists at the University of Bath and we could dispose of plastic responsibly rather than hurling it into the street or leaving it in parks and on beaches – where it all too often ends up in the sea.

At a community level, educational and civic centres – museums included – could be reducing their plastic merchandise, installing (and in certain cases reinstalling) drinking fountains, and doing a lot more to raise awareness of this very real threat to the planet’s future.

Seahorses wrap their tails around ocean debris, such as seagrass, in order to ride the ocean currents and settle further away from where they were born. This ensures the continuing health of their environment. As the tide turned in this Indonesian reef however, photographer Justin Hofman was frustrated by the amount of plastic and unnatural debris present in this relatively healthy reef. In the UK alone, blockages caused by items such as cotton buds cost water companies £81 million per year – a cost that results in higher water bills for households. Many more escape into the ocean where they wash up on our beaches or break down into smaller pieces and enter the food chain causing massive damage to all types of marine life.

The Marine Conservation Society has been monitoring litter levels on UK beaches for almost 25 years and has noticed an increase in cotton buds found, from 11 per 100 metres in 2012 to 23 in 2016. Cotton buds are just one example of single-use plastic polluting our oceans the world over.

Thankfully, a petition by City to Sea has resulted in many UK retailers committing to switch over to paper-based cotton buds by the end of this year, meaning that we should see fewer washed up on UK beaches. This is an incredible example of retailers listening to consumers and making a positive change.

We must continue campaigning to eliminate pollution of our oceans and keep in mind that inaction now will mean severe consequences for our future.

Image: Plastic pollution on the banks of the River Avon, 2015 © Lee Hutchinson

See Sewage Surfer and many more inspiring images:
Get tickets for the Wildlife Photographer of the Year exhibition and purchase a souvenir from the shop.

2 comments on “Inspired by: Sewage Surfer” 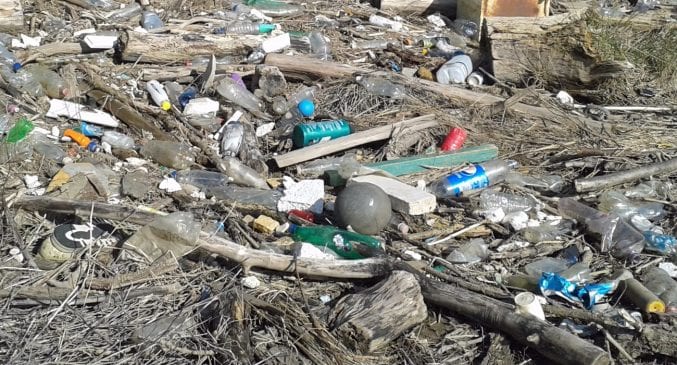