“We are focussing on audio-visual archives because time is running out to save them.”

Friday 27 October was World Audio-Visual Heritage Day and the Association of Commonwealth Archivists and Records Managers marked the day with a symposium called ‘Imaging Imperialism’.

Nicky Sugar from Bristol Archives attended to share information about the British Empire & Commonwealth (BEC) Collections. Here, she writes about the importance of safeguarding our audio-visual heritage and future plans for working with colleagues overseas.

On World Audio-Visual Heritage Day, archivists and historians from Europe, Africa and the USA gathered at the National Archives of Malta, a building which was once home to the oldest hospital in Europe. In the former hospital chapel, we listened to talks on themes relating to imperialism, as studied through photographs and films.

My own presentation told the story so far of our work on the BEC collections.
I outlined our aim to make the archives available to as many people as possible. Most of our films and photographs were taken from the perspective of colonialists. We can’t change that fact, but we can be honest about it and work hard to allow other viewpoints to emerge from the collections. In my talk, I discussed the many issues we have talked about during our work so far. These include when we need to censor material, how we decide what new material to accept, and how to promote a sometimes challenging collection in a sensitive way. Conversations about colonial legacy show no sign of being silenced in 21st century Bristol, and I finished by saying that we hope our collections can make a positive contribution to these discussions.

I also shared a number of photographs and clips of film with the audience, to give a flavour of the material in the collection. Audio-visual archives have a special ability to break down barriers to accessing the past: to enjoy photos or film you don’t need to speak English or have any special level of literacy.

“It is part of everyone’s right to have access to documents on their own history.” The talk which had the greatest impact on me was given by Njorour Sigurosson, Chair of the Expert Group on Shared Archival Heritage.

This new initiative by the International Council on Archives was set up in 2016 to consider and resolve issues of archives relating to “more than one community, country or region where the custody, ownership and access is unclear or in dispute.” Dr Sigurosson spoke movingly of the huge responsibility for archivists who hold material created in one country but held in another.

The group works mainly with official government records rather than personal collections like ours. However, this talk strengthened our commitment to sharing information and copies of material where we can. We particularly hope to connect with archive services and communities in Commonwealth countries which feature in the material we hold. Over lunch I got chatting to Esther Olembe, Director of the National Archives of Cameroon. She was keen to keep in touch and discuss ways in which we might work together in future.

We have already shared material with individuals and archive organisations in Kenya and the Seychelles. Since I returned to Bristol, we have also talked to staff from the University of Bristol about sharing digitised material with their contacts in Commonwealth countries. These include some areas where unrest has meant that very little evidence from previous generations survives, making access to historic photographs all the more meaningful .

We look forward to posting updates. 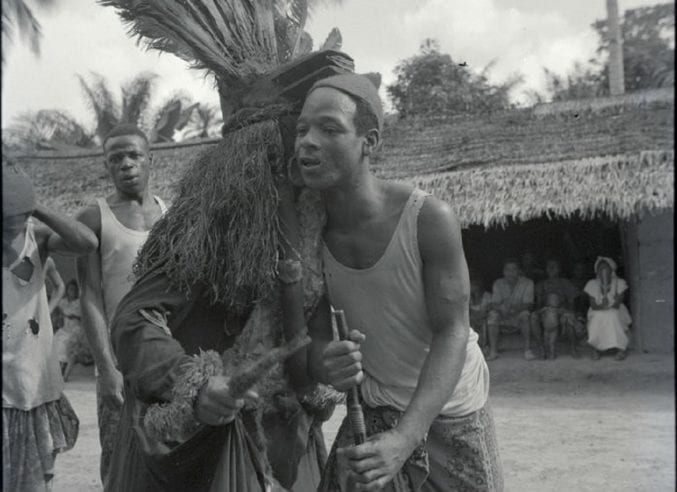