My visit has been the second half of a professional exchange between Bristol Archives and the Stadtarchiv Hannover. Dr Christian Heppner visited us in Bristol in April this year, when he researched the relationship between our two cities, learned about archival practice in the UK and gave a talk to members of the Bristol-Hannover Council. I’ve now been visiting Hannover to find out about archives in Germany. Bristol and Hannover have been twin cities since 1947, when five Bristol men went on a ’mission of goodwill‘ to create links and friendship in the aftermath of the Second World War.

When they returned to Bristol, they formed the Bristol-Hannover Council. The people of Hannover were still suffering from shortages of food and clothing, so Bristolians collected relief goods for them. These included shoes for people who had no footwear to walk around in the freezing winters.

Both Bristol Archives and Stadtarchiv Hannover have presented exhibitions celebrating 70 years of this link, with Christian and myself assisting each other with finding dates, information and images. It has been great to see the documents held in Hannover, having spent so long looking at the items held in Bristol when putting together the exhibition. It has also been interesting to see places and buildings which I had previously only read about. Both Bristol and Hannover suffered heavy damage from air raids. The 14th century Aegidientorkirsche (Church of St Giles) was left ruined as a memorial to those killed in the war, much like St Peter’s church in Bristol’s Castle Park. Being here on Remembrance Day was particularly poignant and made me realise the impact on all sides.

The last time I spoke any German was at secondary school, so my new colleagues have been very understanding. I have learnt or remembered many new phrases covering archives, the aftermath of the war, ordering food and coffee break time!

I have also been getting to know slightly different ways of archiving. As in the UK, the fundamental principles in Germany are the same, with some differences in terms of practicalities, such as arrangements of strongrooms, the numbers of digitised items, and cataloguing software.

I have also been learning about how archives work in Germany. There are more ‘levels’ of archives, from Bundesarchiv (national), Staatsarchiv (regional) and Stadtarchiv (city), as well as some smaller neighbourhood archives. In a Stadtarchiv, the collections are similar to those in Bristol Archives– records from the local administration as well as local associations and clubs, private deposits, books and leaflets.

The exhibition 70 years of twinning: Bristol-Hannover and Bristol-Bordeaux is on display at Bristol Archives until 12 January 2018.

One comment on Hallo from Germany: an archival exchange 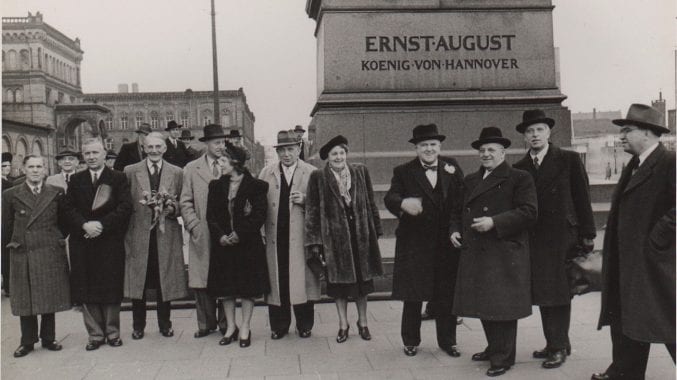