On the evening of 6 November 2014 the University of Bristol’s Tyndall Lecture Theatre played host to crashes, bangs and wallops from out of this world. Dr Robert Massey from the Royal Astronomical Society led a packed out auditorium for an evening of all things extra-terrestrial with his lecture about how comets and asteroids move through the solar system. A full auditorium enjoying an interesting and free lecture, thanks to the Friends of Bristol Museums, Galleries & Archives.

This was another successful evening in the series of winter lectures organised by Bristol Museums and so generously supported by the museums’ Friends group each year.

My presence at the party was not just to enjoy myself, although this was high on the list, as there are some fine meteorites within the museum’s geology collection and here was a great way to show them off to everyone! However, my first task was not so glamorous and involved fetching two cups of mud in the pouring rain (purpose to be revealed later). I’ll do almost anything in the name of science.

What followed was an hour of amazing facts – did you know that Halley’s Comet is actually embroidered into the Bayeux tapestry? Or that Rosetta’s ten year mission to land on a comet is almost here? It was also interesting to find out that famous astronomer and one time Bath resident William Herschel was the first president of the Royal Astronomical Society, but was never recorded as attending a meeting (due to advanced years, apparently). There is still a museum in the house from which Herschel worked and where he first spotted Uranus. Dr Robert Massey from the Royal Astronomical Society makes his own comet. Don’t try this at home!

To end his entertaining lecture Dr Massey made a comet using ingredients you can find in your kitchen. This is what my mud was for. Should you wish to know, the contents of a model comet, or ‘dirty snowball’ are: water, mud, Worcester sauce, more water and something to freeze it solid (he used dry ice, for full ‘mad scientist’ effect I’m sure – and it worked!), then you take a big mallet and bash it all together to make sure it all sticks. Don’t try this at home! “There is something evil in this bag,’” he cried, “there shouldn’t be a twig in there!”

What can you expect from a DIY comet?

As our collections manager correctly pointed out, the geology team are the only team within the museum whose collection policy is – terrible pun alert – out of this world! And so the museum’s meteorites, the true stars of the show (sorry, I know they’re not actually stars), were on show after the lecture had ended for everyone to come and look at. We are very lucky to have some fine examples on permanent display in the geology gallery at Bristol Museum & Art Gallery.

Meteorites from the museum’s collection on display in the geology gallery at Bristol Museum & Art Gallery: Iron/Nickel (the left) and Stony (right).

The collection also boasts a piece of the famous Murchison meteorite. This meteorite has been studied extensively since it landed in Murchison, Australia in 1969. The piece now in Bristol museum’s collection went off to NASA in 1971 for research which showed it to contain among other things amino acids – the building blocks of life.

The museum is also home to some wonderful looking tektites – these are the ‘ejecta’ thought to have formed from meteorite impact sites. They often show ‘tear-drop’ or ‘splash’ shapes from the rapid cooling they have undergone.

Other interesting specimens from the museum’s collection: A piece of the Murchison meteorite (left) and examples of tektites from near the Angkor Wat Temple complex, Cambodia (right).

Dr Massey chose his subject well because on Wednesday 12 November 2014, if all goes well, the Rosetta mission will land on comet 67P/Churyumov–Gerasimenko. There is a really cute animation of how this will all work.

This is exciting science happening now, so keep your eyes on national media and watch the landing and all the amazing new things this mission will teach us. 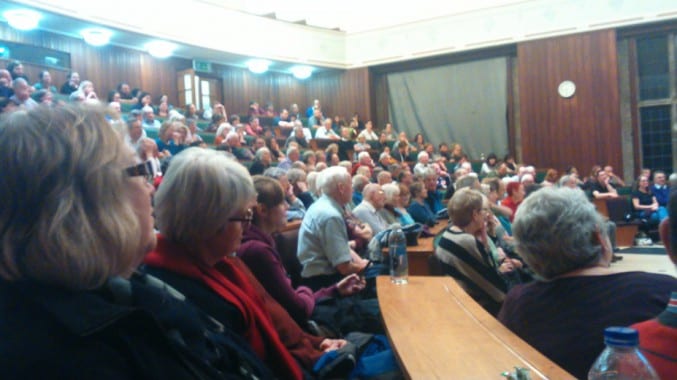