The current Empire Through the Lens exhibition at Bristol Museum & Art Gallery is not only a fascinating one, but a very important one. Probably my favourite exhibition at the museum since I moved here in 2015, it is comprised of 27 images, all taken in various countries once part of the British Empire or Commonwealth during British rule.

Some are lighter than others, but there are also those photos that, in the words of David Olusoga, “stick in the throat”.

David is a historian, broadcaster and one of the exhibition’s contributors. I spoke with him and two other contributors about why exhibitions like this are so important and relevant today, and thus what we can, and must learn from the Empire.

The first image you come across when you walk into the exhibition room is chosen by Abdi Mohammad. I spoke with Abdi about his choice, on the significance of exhibitions like this, and how that relates to his choice.

He said “it’s about connecting history and culture“ and “looking at the way people used to live.” In this case, the Nomadic people of Somalia, a culture very different from our own. For Abdi, when studying history we must also study the cultures of these people whose experiences are so removed from ours to broaden our cultural understandings.

I also spoke with Victoria Howard, who was born in the Seychelles. Her selection for the exhibition is a great piece of film shot by her father showing various aspects of daily life in the Seychelles. In my interview with her, she reflected on the way the nation she was born in has developed over the previous half-century. Like Abdi, Victoria sees exhibitions like this giving us “a sense of our place in history”, something incredibly important in the modern age.

Lastly, I spoke with David Olusoga. He talked about how we must frame the history of Empire, and why it is so important we tell those stories fully. David told me he thinks exhibitions like this help remind us that the country’s history is a colonial history.

People have tended to favour an “island-story” version of Britain’s past that doesn’t account for the nation’s actions in countries all over the world. For David, this “island-story” is unsustainable; we cannot make proper sense of the present if we are not looking at the past from a global perspective. If exhibitions like this do tell those stories as globally and cross-culturally as possible, then it is for this reason that they are so important.

Some of my highlights from the collection include Shawn Sobers’s choice; a picture taken in Kenya 1953 depicting a private conversation between two men, surrounded by a circle of other men listening in. Sobers’s commentary beneath the photo reveals that these men are members of the Mau Mau. It is an unsettling image; on the surface it’s one of solidarity and brotherhood, but one that we know, given the circumstances of the Mau Mau, was taken in an environment of colonial oppression.

Another highlight of mine is also one of David’s favourites, “Decolonising Christmas Photography in Racial Time, 1923”, chosen for the collection by Dr Mark Sealy. For David, and for myself too, it is this one that “sticks in the throat”, and epitomizes “deliberate, systematic, intentional humiliation”.

A lighter image in the collection is “Woolworth’s Opening, 1956” taken in Barbados. Chosen by archivists Nicky Sugar and Jayne Purknell, it shows how far Britain’s influence stretched across the globe. This Woolworth’s was sold into local ownership in the 1980s… perhaps it has lasted longer than ours!

There are many other examples of the great and shocking images in the exhibition that encourage us to rethink the way we tell the story of Empire, and push us to include more diverse, global narratives in those stories.

The exhibition runs until next August, and I strongly recommend it to anyone, especially anyone with an interest in the way we tell various histories.

Find out more about Empire Through the Lens. Can’t make it to see the exhibition in person?

See this gallery on our exhibitions online 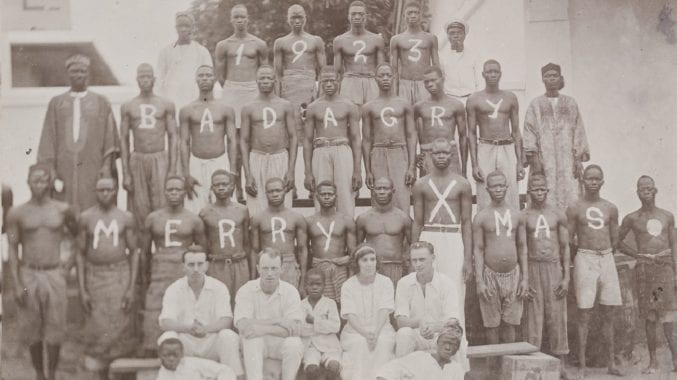