Duppy Beatz is a Bristol based grime and rap artist and producer. His career took off thanks to BBC Introducing, and he’s played to thousands in Bristol’s Millennium Square. Now he inspires others to unleash their creative juices and use music to overcome social disadvantages.

In light of the new Bristol Music exhibition at M Shed, I caught up with him to talk growing up in Bristol and the importance of music to the younger generation.

Can you tell me a bit about how you first got started in music, and your first steps getting to where you are today?
The real transition phase was when I was in my early teens. My friends and I looked up to the grime and garage MCs that were coming out of London – that kind of music was really hitting the younger generation at that time.

We would record our own lyrics on our phones and stuff and be trying to imitate other MCs, all a bit of fun really. A big part of that was being a bit aggressive and a bit rude and bashing other MCs. That was because as a young person you find yourself in a struggle between the kind of person you were as a child, but all of a sudden you come up against challenges from your peers and society and your school and at times a lot of young people, myself included at the time, end up going off track a bit.

You find yourself wanting to be a bit rebellious (I don’t like that word rebellious, it sounds a bit cliché) but you find yourself testing the boundaries and stepping out of line a bit, and that type of music definitely synced up with that kind of age range.

Do you reckon music was a good outlet for you when you were at that age and growing up?
At that stage I would say, for me, no. Music was part of my social life, it was like an activity that brought my friends together. It was just one of the things we did to hang out, like playing football or going to the cinema.

As I got older, trends in music and grime and being with peers and testing boundaries, was kind of damaging and I ended up in a pretty bad situation. I’d never been a particularly naughty or disruptive child, but all of a sudden I found myself being led astray. I fell off the rails a bit when I was 16, and that was a turning point for me. Luckily at that time I found I really appreciated music production, and I joined a music project in my community that brought young people together.

It was still very social, but much more positive. I had a mentor there, and we were given the license to create in a structured and supported way, which was very different to hanging out with friends and rapping bars about some guy from another area that you don’t like. It felt like you were learning something, and being expressive and creating something in your own way.

So yeah in this setting music was a great outlet and a big part of my life then. I worked with my mentor for a number of years and really got my skills up as a musician and a producer and it made me want to bring people together and help people, and it made me want to return to who I was before all that stuff in my teens. I had no real reason to be so disruptive in my teens, it was all a façade.

I was able to let go of that and from when I was 18 I was in the studio quite a lot working with my mentor and other young people in my situation who found their way through music. It was fun and led me down two paths – one was as a music producer, and one was supporting other young people who wanted to take up music and give them what I had been given.

So is that kind of what you’re trying to do through ‘Aspiration, Creation, Elevation?’
Exactly, so this is the legacy of that starting point. As an artist I was able to collaborate with different people, and my style was to encourage collaboration. I acted as a sort of executive producer. I’d be the beatmaker, so I’d make the backing music and hand pick the people who I wanted to collaborate on the track.

We were played on Radio1Xtra numerous times and we performed at the 2012 Olympics when the torch was carried through Bristol in Millennium Square. BBC introducing was kind of new at the time. I uploaded some music to them, we were played on the local station and it was picked up by the national radio. Myself and MC Empror were the first artists from Bristol introducing to be pushed onto the national channel. To be honest, I learned that performing and touring wasn’t for me.

So for you music is more about bringing people together then?
Yeah, that’s where my heart really is – to support and nurture people’s creativity through the arts. I felt like the creative and positive aspect was so important. Me and my business partner set up ‘Aspiration Creation Elevation’ to support young people through music and other types of art.

We call our mentors ‘role models’, to shake it up a bit. We have the role models and creative arts activities, and inspirational experiences – those three things are what Aspiration Creation Elevation are all about. We encourage people to face their disadvantages and overcome them through art.

On that, why do you think it’s so important for young people to have that creative outlet, from your experience?
Obviously from personal experience and from what I’ve seen of my peers, I feel that art and creative expression ultimately unlocks your inner self. A lot of people have a mask, a façade, which is quite normal I’m sorry to say, because of peer pressures and sometimes the communities that you live in and challenges at home mean you might be forced to be someone you want to be, and not someone you are.

Sometimes the person you want to be is more resilient, not scared, cool, liked and maybe even feared. But you might not actually be like that, that’s all just a mask. That’s where the role models and inspirational experiences come in, to help young people overcome those challenges and strip away those layers they’ve built up to protect themselves.

That’s why we do what we do. I believe in it because I’ve seen it in myself and my friends and the people that we work with. Being artistic and creative elevates you as a person, and helps you be more yourself and overcome disadvantages. I was happy to let go of being an artist because I’m still able to use the skills and experiences to help and support young people. My focus is fully on them now.

So you went down the route of bringing other people up rather than focussing on your own career.
Yeah the music industry isn’t really for me.

Changing tack a little bit, the idea of a ‘Bristol scene’ is thrown around a bit, do you have a take on what the Bristol music scene is like?
Daaamn, good question. To put it simply, there is a scene made up of artists and music, but for some reason, we don’t have much of an industry where there’s a lot of financial input and music output. We have a lot of talent, it’s just not fully tapped yet.

Bristol people love to love Bristol music, and there’s a lot of pride in fellow Bristolian artists. I know there’s a lot of indie and bass music where that’s the case, but I come from the micro-scene of urban music, where there’s more competition. There’s movement in the electronic and dance and indie/rock scenes in my eyes, but when it comes to grime and rap that’s not as strong.

There’s not as much a link to the scene in other cities, there’s a certain culture and mindset which means artists don’t support and boost each other as much as they maybe should. People need to embrace each other and be more open, and that’s where a real industry will come from.

So what’s exciting for you about music in Bristol?
In Bristol there’s a lot of talent, and for me, that talent hasn’t fully reached its potential yet. And that’s exciting, because I know that when it does reach its potential, it’s gonna explode. I feel like it’s bubbling under the surface – I hate to use clichés – but it’s bubbling under the surface, and when it pops it’s gonna be huge. I just want to support that, I don’t know how long it’ll take, I know it’s not gonna be tomorrow, it could be a year or five years, but I reckon it’s gonna pop and be massive.

Do you think the work you’re doing now is building towards that?
Honestly, I do. That’s not the be all and end all of our work though. We do what we do to help individuals overcome barriers, and realise their aspirations. We’re hoping to steer some of those talented individuals to that gateway which takes everyone to the next level. If we can get just one or two through that door, it would be amazing to have been part of that. 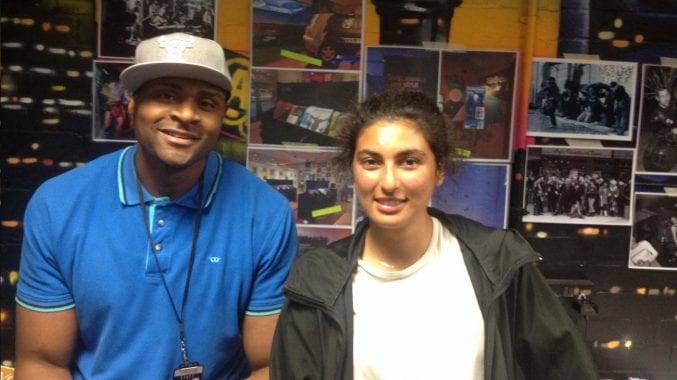