Update, 13 November 2015: This beautiful painting is now back on display in the Victorian and Edwardian Gallery (Second Floor) for the first time in 18 years. Below you can read about its restoration.

Shhh! We’ve been tip-toeing around Bristol Museum & Art Gallery, trying not to wake the sleeping beauties as we carefully carry Sir Edward Burne-Jones’ beautiful painting The Garden Court from our conservation department back to its frame in the Fine Art store.

The painting has been having some conservation work over the last few months, unveiling the true beauty of Burne-Jones’ magnificent painting.

There have been lovely discoveries during the work. Infra-red photography revealed some interesting amendments Burne-Jones made to the composition as he revisited the painting over time. It appears that the red haired maiden on the far left of the picture would possibly at one stage been without her top plait, and instead an elongated hand would have extended further along the top of her crown. Other photos allude to alterations of shoulder positions and draping hands and fabric. A note from Burne-Jones on the back of the frame, detailing how he wanted the painting to be displayed.

When safely back in its frame later this autumn, The Garden Court will form the centrepiece of the Victorian and Edwardian Gallery and will be displayed for the first time in over 18 years. In the meantime, you can see the painting in our online collections search.

Big thanks go to the many generous individual donors and the Friends of Bristol Art Gallery who donated to our fundraising campaign which enabled us to conserve and display this amazing painting again. 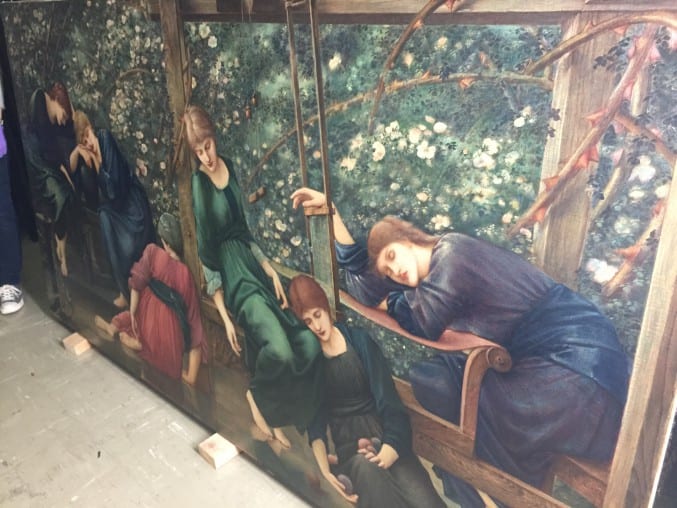