by Matthew Hallows, MA Curating student at the University of the West of England

Matt spent his placement with the British Empire & Commonwealth Collection. He helped to catalogue an extensive collection of documents from the Royal British Legion in Kenya. As this catalogue goes online, he outlines why it is such an important resource for researchers.

Note: some of the quotations reproduced in this blog post are typical of the colonial and racist views that were common in the mid-twentieth century. They do not reflect the views of the author and some may make for uncomfortable reading.

“I do not think it is realised that anything but Europeans exist.”

Four decades earlier, approximately 45,000 men from Kenya had died in the First World War – roughly one eighth of the country’s male population. As a result of the conflict, many ex-soldiers, both African and European, found themselves displaced, injured, and facing hardship. The Kenya Branch of the Royal British Legion (Kenya RBL) was set up in 1928 to serve the ex-service community that had formed in Kenya. Over the course of its life, it raised hundreds of thousands of pounds.

The archives of the Kenya RBL are now held in the British Empire & Commonwealth Collection. They include minutes, financial reports, photographs and other documents relating to the organisation. The collection covers the Legion’s work in Kenya from 1928 to 1968, a period which saw the Second World War, Kenyan Independence, and the wider decline of Britain’s Empire.

I have selected just a few themes from 28 boxes to explore in this blog. These documents shed light on how the organisation operated, give insight into individual lives, or reveal the wider political picture.

The plight of soldiers

“Jan Mohamed Pirbuksh: The Secretary reported that this man had been brought into the office. He is totally blind, and has recently been discharged from the Forces, medically unfit. He had been examined by Dr Harley-Mason who had admitted him to hospital for an operation. In this case also, he had been discharged without a pension or any other means of sustenance”. 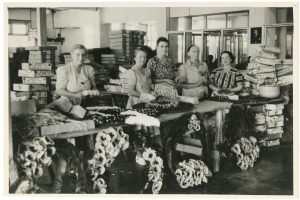 This extract shows the desperately difficult times that many ex-servicemen faced after fighting on behalf of the British Empire. The funds which the Kenya RBL distributed to veterans, their widows and orphans changed thousands of lives.

Some individuals had been traumatised by wartime experiences into making poor choices in later life and they were helped without judgement. The collection records many of their names and stories, a unique resource for researchers.

“He said that as far as he was aware, this was the first time that any organised body had recognised the claim of African Ex-Service Men for assistance. He said that his idea was that they required help in finding employment rather than monetary assistance.”

The idea of forming a section to serve the needs of African ex-servicemen was first suggested in this extract by James Mostyn Sylvester, in 1934. As can be seen here, African ex-soldiers were not seen as needing the same level of care as their European counterparts. Instead of offering grants, as was the usual practice, offers of employment were suggested instead.

By the time the African Section was finally founded in 1946, thousands more Kenyan men had died fighting for Britain in the Second World War. The conditions they endured were horrendous, with three times as many African soldiers dying from disease as were killed in active conflict.

The British in Kenya

“He was also very strongly opposed to the mixture of races and suggested that separate Fetes should run for Europeans and Asiatics.” 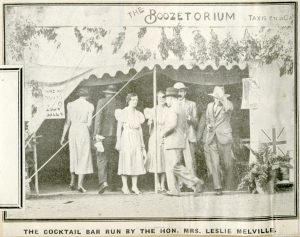 Many of the Legion’s activities seemed as much about maintaining British ways of life in the colony as about raising money.

One example was the Kenya RBL Fete which was held every year. Major A. Dunstan Adams shows in his words above the racist and condescending attitudes that the colonial British had towards the local African community, and community of Indian ex-service members that had settled in Kenya.

“The future of the Legion remains obscure, but this shall not deter us from continuing our task of assisting ex-Servicemen and women and their dependants of all races, whatever way we can, whether the assistance is financial or otherwise.” 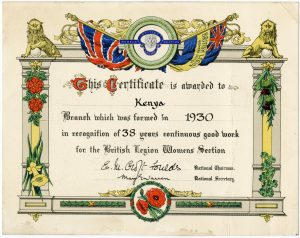 Following Kenyan Independence, the Kenya RBL faced financial difficulties. It had to sell some of its assets, but remained committed to providing aid to the needy. The former African Section became part of the King’s African Rifles and East African Forces Old Comrades’ Association.

In 2003, the Kenya RBL donated this collection of documents to the former British Empire and Commonwealth Museum.

Now that the collection is catalogued, it has been exciting to see it more widely used. One recent researcher of these records works for the Commonwealth War Graves Commission, who are striving to correct inequalities in commemoration between European and Commonwealth Soldiers. We look forward to receiving more enquiries from our online audiences. 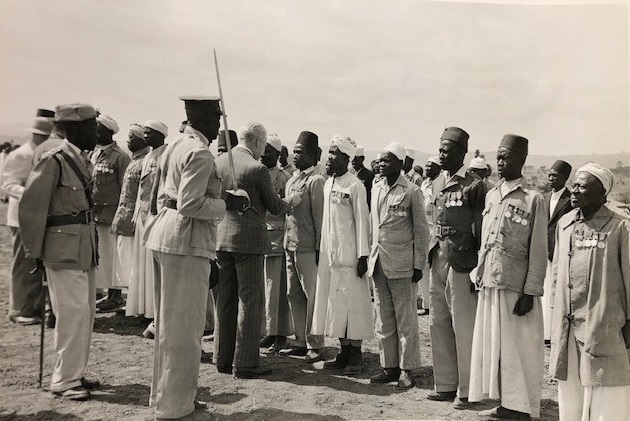