Our staff and invited guests introduce their favourite documents from the Bristol Archives collections. For this edition, Julian Warren, Archivist has chosen the surviving portions of a medieval temporale.

The Temporale is a medieval choir book. Produced in the late 14th century, it is one of the oldest and most beautiful records of Bristol Cathedral. It is now on display at M Shed.

Arranged according to the feasts of the liturgical year, its name comes from the Latin ‘tempora’, meaning ‘over time’ or ‘across seasons’. It contains the words and music used for services. It would have had a companion volume – the ‘Sanctorale’ – containing music for special services for saints’ days. The monks of St Augustine’s Abbey (now the cathedral) would have gathered on the altar steps to sing in unison from these books.

The texts are full of wonderful illuminations such as the monk shown above, seen waving his weapon, perhaps a strigil, at the lusty mermaid across the page.

Although incomplete, the Temporale has been lucky to survive. After the dissolution of the monasteries by Henry VIII, abbey service books were no longer needed. However, parchment was both durable and expensive and markings show that the pages were used to wrap cathedral accounts in the years following 1557.

Astonishingly, the pages were reassembled by Bishop Browne, who bought a bundle of old parchments and discovered the pages some 350 years later. He speculated that ‘the parcels [of accounts] had been tossed out at the burning of the bishop’s palace in the [Bristol] riots of 1831 and a few of them … carried off by some chance passer-by as a memento.’

In 2009, the covers were expertly restored and the pages digitised. Mark Lee, Master of the Choristers at Bristol Cathedral, transcribed one of the sequences for the choir to perform, probably for the first time in over 450 years.

The reference number for this document is DC/A/6/8. 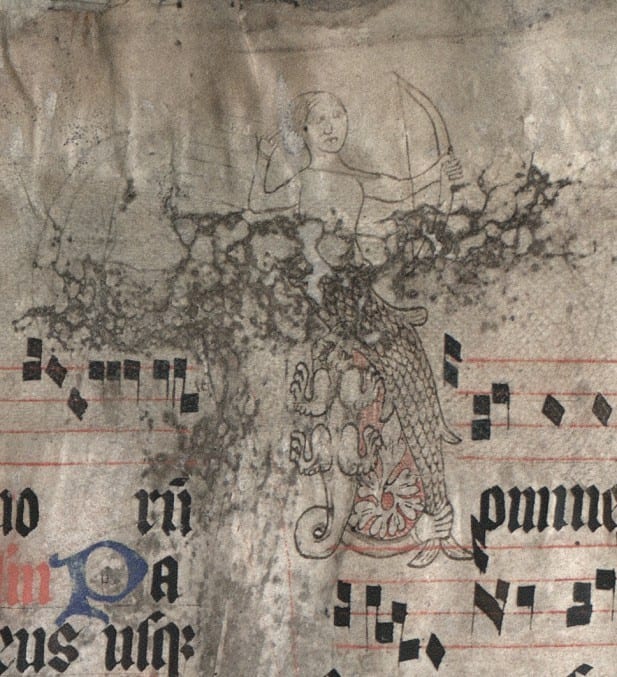